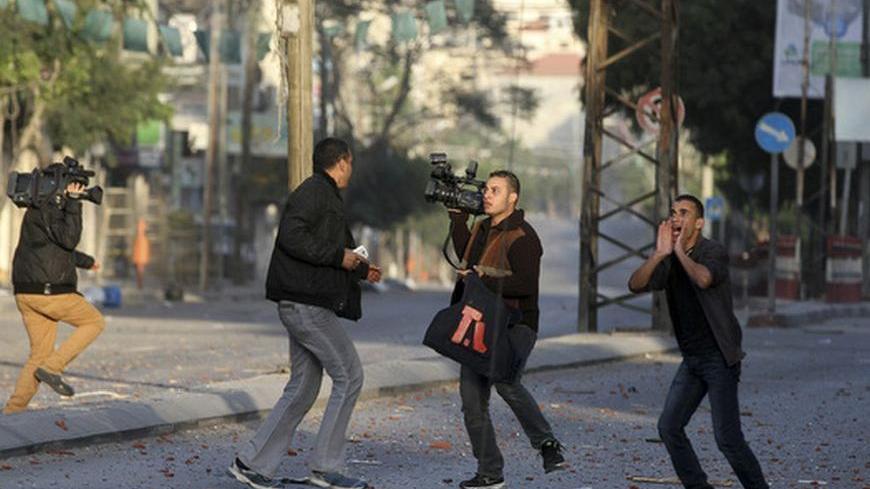 Palestinian journalists react after an Israeli air strike on the office of Hamas television channel Al-Aqsa in a building that also houses other media in Gaza City November 18, 2012. - REUTERS/Majdi Fathi

Hamas, after six years in power in Gaza, decided on Tuesday to ban Gaza-based Palestinian journalists from working for Israeli media outlets.

Only a few Gaza journalists are said to be working for Israeli media, including Channel 10 and Haaretz. Many of these journalists declined to speak to Al-Monitor about the ban out of fear for their safety, but Al-Monitor contributor Abeer Ayoub spoke out against the move.

Ayoub has had her work published in Israel’s Haaretz over the past few months, and has expressed resentment over the ban that she believes is “counterproductive” to spreading the Palestinian perspective.

"I can definitely say that Haaretz, for which I have been recently working, is an objective Israeli media outlet. If not, I wouldn't have worked for it at all. I have always focused on human-interest stories from Gaza and the newspaper would accept and publish them. I do not see that such a decision by the government is helpful."

Ayoub expressed her concern about the decision and went to negotiate with government media bodies in Gaza.

"I managed to contact the relevant authorities and voiced my concern outright. I told them I do not think that Israeli media outlets would not stop working in the Gaza Strip. They will most likely rely on the reporting of large international news agencies. I feel really sorry, for we, Palestinians, will lose the chance to voice our Palestinian story to the Israeli public."

While individual journalists might be discreetly voicing their frustration at the ban, the Palestinian journalists syndicate in Gaza has yet to officially respond, raising concerns that no official body will challenge the Hamas ruling.

Veteran Gaza journalist and rights activist Fathi Sabbah told Al-Monitor that Gaza-based Palestinian journalists have helped change the tone of some Israeli coverage of Gaza, and that this relationship is too valuable for the Palestinians to lose.

"I always emphasize the notion that we in Gaza need to create some kind of impact on Israeli media, something that cannot be achieved without Gaza-based journalists working for Israeli media. Over the past few years, the Israeli version of the story from Gaza has been partially affected by Gaza journalists, and once these journalists stop working for the Israeli press, we will end up with zero influence,” Sabbah said.

The veteran journalist said the Hamas government should have “negotiated with the journalists concerned or with any media body,” calling the ban a “hasty decision.”

"We have made such a decision for two main reasons: Such media outlets basically belong to an occupation that has occupied our lands and they definitely serve that occupation. More importantly, following our own observations of the media coverage from Gaza by such media outlets, we have found that they never serve the Palestinian community in terms of the Palestinian story due to lack of objectivity,” said Ihab al-Ghosain, head of the Gaza government’s media office, explaining the reason for the ban.

Al-Ghosain conceded that some Gaza-based Palestinian journalists “appeared to have been impacting the Israeli version of the story,” but at the end of the day, “those journalists are governed by editorial policies.”

In explaining why Hamas made the decision now to impose the media ban, and not six years ago when the Islamists took control of Gaza, al-Ghosain said that “We have realized that the Israeli media has been partial to and helped the Israeli occupation further destroy our infrastructure, which in itself has been a main objective of the occupation.”

In a dangerous warning, the media chief made clear to Al-Monitor that working with such Israeli media outlets would be considered normalization of the occupation, and a form of collaboration.

“We have figured out some solid cases of collaboration between those working for media outlets belonging to the occupation, and discovered that those media outlets managed to get some intelligence information from them, not hard news,” he said.

Citing security concerns, al-Ghosain said some Israeli media outlets would direct their Palestinian correspondents in Gaza to certain locations, something that Hamas views with suspicion.

"Some special professional committees have been relentlessly monitoring the work of Israeli media outlets [in Gaza], and following such monitoring the government has decided to issue that needed ban,” he said.

Al-Ghosain cited two cases of Palestinians who worked with Israeli media, one of whom is currently serving a jail term. Both journalists engaged in collaboration with Israel by means of their media work, according to al-Ghosain.

But the Hamas official rejected claims that they were clamping down on media freedom, stressing that the press, including foreign media, has enjoyed a great deal of freedom in the Gaza Strip since Hamas came to power.

"We strongly believe in the freedom of the media. Our decision has nothing to do with this freedom. Throughout the past few years, we have allowed great freedom to the press. For example, we have been allowing media outlets to shoot in the streets, despite the fact that such reporting should be done with a license. We have never asked media outlets to get such a license,” he said.