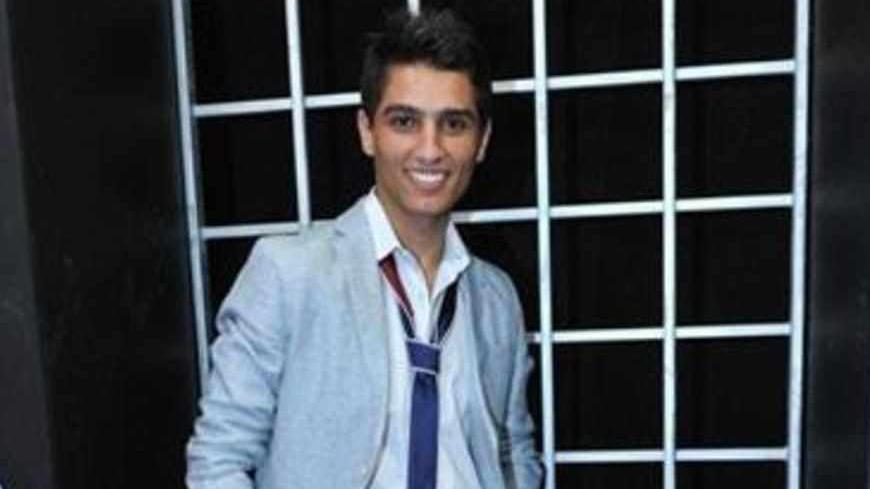 Mohammed Assaf, a 23-year-old Palestinian from the Gaza Strip, is among the finalists in the wildly popular TV show "Arab Idol" on regional channel MBC. Assaf, hailing from the Khan Younis refugee camp, is a serious contender to win the show’s prize and has drawn the admiration of many back in Palestine.

That fact hasn’t escaped Mohammed, who told Al-Monitor that “whether I win or not, I am honored to be representing Palestine.”

“First and foremost, I salute the Arab masses and the Palestinian people in particular, in addition to all the people who supported and voted for me. It was for them that I reached this important stage,” he said during a phone interview from Beirut.

“Hopefully, I was able to honor my country and meet the expectations of the people who loved and trusted me.”

Mohammed spoke of the value of art and the ability to communicate his feelings through singing.

“Art is a sublime message that touches the heart faster than any other. I hope that I have communicated a refined message in a fascinating and artistic way. I hope that I was able to communicate my feelings and singing to everyone; for me, this is what matters most regardless of the title,” he said.

The young, talented Palestinian singer hopes his participation in "Arab Idol" will serve as a role model for other Palestinians.

“I salute my people and the Arab world. Palestinians have always been determined despite the dire situation in Palestine. Innovation is rife in our country in all fields, not just in the artistic ones. I hope that I was able to be a role model or a part of the respectful examples the Palestinians have set in the Arab world and the four corners of the globe,” he said.

Mohammed's singing talents were evident from an early age, according to his father Jabber Assaf.

"I discovered Mohammed's talent when he was only five years old. I decided to make sure such a talent was developed,” Jabber told Al-Monitor from his home in Khan Younis. Jabber persisted with his son’s training despite the absence of music schools in Gaza, he explained.

“I encouraged him to participate in musical festivals or shows inside and outside the school,” Jabber said.

Mohammed’s fortunes began to grow during his teenage years, when at the age of 11, his father introduced him to local singer Jamal al-Najjar. Najjar “helped Mohammed participate in a patriotic song broadcast on Palestine TV,” the now-retired father explained.

Mohammad is known in the coastal occupied territory as a talented singer, excelling at difficult melodies, including the so-called jabali-style songs.

"My son has been such a well-known singer and his first song was the patriotic song "Be Strong My Country," which he performed along with Jamal al-Najjar in the late 1990s. In 2005, he performed alone a very well-known song "Raise Your Keffiyeh and Wave It," as he belongs to Fatah,” Jabber said before getting ready in front of the television to watch his son on "Arab Idol."

Mohammed’s arrival at "Arab Idol" was no easy feat, his father recounted, who said it was a “miracle” that his son made it to the audition in Cairo.

“We tried to help Mohammed travel to Egypt, but due to his age, according to Egyptian regulations at the Rafah crossing, we had to pay a few hundred dollars so he could leave,” Jabber said.

Mohammed is a “cheerful” and “caring” person, according to his good friend Mohammad Jaber. The two have been close for seven years.

"I first got to know Mohammed when we were studying electronic media. Currently, we are in the final year of our public-relations majors at the Palestine University. He is a very caring person to everyone he knows. Also, his cheerfulness reflects on the way he deals with others, to the extent that he never gets nervous,” Jaber said.

A large poster of Mohammed hangs on the wall of his home in the Khan Younis refugee camp. A local support group for Mohammed has been active in mobilizing votes for the young Palestinian.

"We have been in constant contact with our friends in all parts of the Gaza Strip and some other parts of the Arab world, for the sake of voting for Assaf. We have also established a Facebook page,” Ahmad Awwad, director of Assaf's voting campaign, told Al-Monitor.

In addition to the fan club, Palestinian cellular company Jawwal, together with Gaza-based band Asayel, has launched their own campaign to vote for Assaf via SMS.

"Mohammed represented all the Palestinian people when he sang a very beautiful patriotic song, "Ya Tair Al-Tayer" ["Oh Flying Bird"]. I encourage all to support Assaf,” Awwad said.

Mohammed’s success so far has also won the support of the Palestinian Artists Union in Gaza.

"We intend to set a big welcome for Assaf when he returns back from Beirut, hopefully winning the program's prize. We are proud of him and many other talented artists in all spheres of art. He and others alike are definitely great ambassadors for Palestinian artistic life and culture,” senior union member Hussain al-Asmar told Al-Monitor. Asmar lamented the failure of consecutive Palestinian cultural ministries to support the arts.

“But we in the union, once it is established, plan to create the needed atmosphere for the development of such arts and Palestinian artists from the Gaza Strip,” he said.

Mohammed’s participation in "Arab Idol" could be the boost the arts scene in Gaza needs, languishing without support from the Hamas-led government, and without the necessary infrastructure to properly cultivate Gaza’s talented artists.