Mohammed Assaf, the winner of ''Arab Idol,'' managed to unite the Palestinians of Gaza and the West Bank, as well as Arab Israeli, giving them reason to be proud. 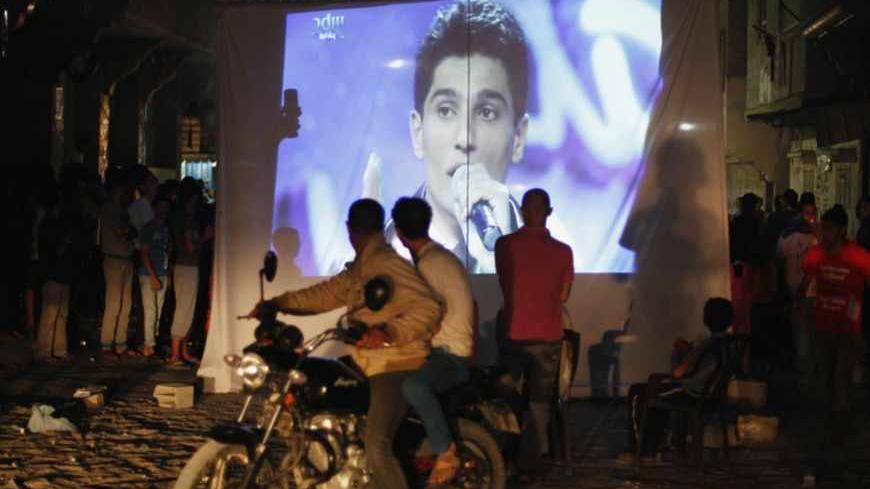 People in Khan Younis, Gaza watch Palestinian singer Mohammed Assaf as he sings in Beirut during the "Arab Idol" program on June 22, 2013. The 22-year-old singer from the Gaza Strip was named the winner of "Arab Idol." - REUTERS/Ibraheem Abu Mustafa

The Palestinians had reason to celebrate for a change. The jubilant outbursts in Palestinian cities throughout the West Bank and Gaza after Mohammed Assaf, 23, from Khan Younis, Gaza, won the Arab Idol competition, were unprecedented. For the Palestinians, a new national hero was born, and the masses, who watched him win on huge television screens set up on the streets, were ecstatic. The night skies lit up with fireworks this past Saturday, June 22, right after he won the final round in Beirut. Hundreds of thousands of people sang and danced in the streets, while Assaf’s songs blared from cars stuck in vast traffic jams.

In some sense, it was reminiscent of the spontaneous celebrations that broke out in Israel when the Maccabi Tel Aviv basketball team (a small team with mostly Israeli players) won the Eurocup basketball championship in 1977. But the latest celebrations were more than that — even bigger than those that erupted when former Palestinian Authority chief Yasser Arafat returned to Gaza in July 1994.

Mohammed Assaf studied at a Gaza university, and dreamed of one day becoming a journalist — once one of Gaza's most in-demand professions, which, until the Arab Spring erupted, was the leading source of news stories throughout the Middle East, if not the world. Then Assaf decided to try his luck on the MBC network's Arab Idol competition. He set out for Beirut, only to be delayed in Egypt. When he finally arrived, he discovered that he had missed his chance to try out. He was just one of 17,000 young men and women from across the Arab world who came pounding on the studio doors hoping to get accepted on this popular reality show, and the tickets were already distributed. But Assaf got lucky. A young Palestinian from the Nahal family, who now lives in Dubai, was impressed by Assaf’s singing and made a very noble gesture. He gave the boy from Khan Younis his own ticket.

The rest is history.

Assaf made it through all the stages. In Saturday night's finals, he competed against an Egyptian male singer and a Syrian female singer. During the live broadcast, restaurants, hotels, and public squares were packed with thousands who came to show their support. For one brief moment, Assaf showed everyone that there is another world out there — an open, glamorous world, free of rigid religious impositions and full of music, where beautiful women dress in glittery gowns.

But it wasn’t just the Palestinians of the West Bank and Gaza who came out in support of their new hero. The finals were a nail-biter for Israeli-Arabs too. Across Israel, restaurants and cafes were full of fans excited to watch the kid from Khan Younis who gave them something to be proud of, if only for a moment.

And that is no small accomplishment either. For one evening, that young man from a refugee camp was able to bridge the gap separating the Palestinian factions in the West Bank and Gaza, and even overcome the differences between them and the Arabs of Israel.

For the past few years, divisions between these three entities left the sense that they had nothing in common. Yes, they were separated by different governments and geographical distance, but it was the cultural-political differences that had the greatest impact. So, for example, the people of the West Bank felt removed culturally, to some degree or other, from the people of Gaza. They may even have behaved condescendingly to them. Evidence of this can be found among the hundreds of Palestinian residents of Gaza who fled to the West Bank in the wake of the Hamas coup in June 2007. Even now, six years to the month after Hamas seized control of Gaza, they still feel the same sense of alienation in their new homes.

It goes both ways. The people of Gaza feel that most Palestinians in the West Bank don’t care about their fate. Residents of Gaza frequently complain that the Palestinians of the West Bank didn’t speak up when Israel imposed its suffocating siege on the Strip. Most of their anger at the West Bank is directed at the apathy its people showed to their brothers and sisters in the Gaza Strip during the Israel Defense Force’s various operations, including operations Cast Lead and Pillar of Defense. It was as if the war was occurring in some remote place that had absolutely nothing to do with them.

The situation is similar as far as the Israeli-Arab community is concerned. Most of them — and I tread cautiously as I say this — feel that they have little in common with the Arabs of the territories. They are something like ''distant relatives'': It’s nice to go visit them or ask how they are doing every now and then, but that’s it.

The Palestinian people have never been this divided. Gaza has an Egyptian orientation; the West Bank has a Jordanian orientation; and the Israeli-Arab community is doing everything it can to integrate into Israeli society as equals among equals, even if this is getting nowhere.

Then along comes Mohammed Assaf with the song Safini Mara (Be Straight with Me Once) by Abdel Halim Hafez, and wins the coveted title. Some viewers ran around waving Palestinian flags, while Assaf dedicated his victory to the entire Palestinian people.

He’ll be returning to Gaza this week, but his life will never be the same. This sets him apart from his local fans. Gaza will still be Gaza, the West Bank will continue dealing with its interminable feuds, and Israeli-Arabs will carry on with their efforts to break through the glass ceiling of Israeli society, only to discover that it is cast in steel.

But now, however, they will have at least one good reason to be proud. His name is Mohammed Assaf.