Fatah source: no chance of reconciliation with Hamas

In an interview, a Fatah source in Gaza said that Hamas arrested him and his colleagues during the fighting, and that the rift between Hamas and Fatah was about to explode. 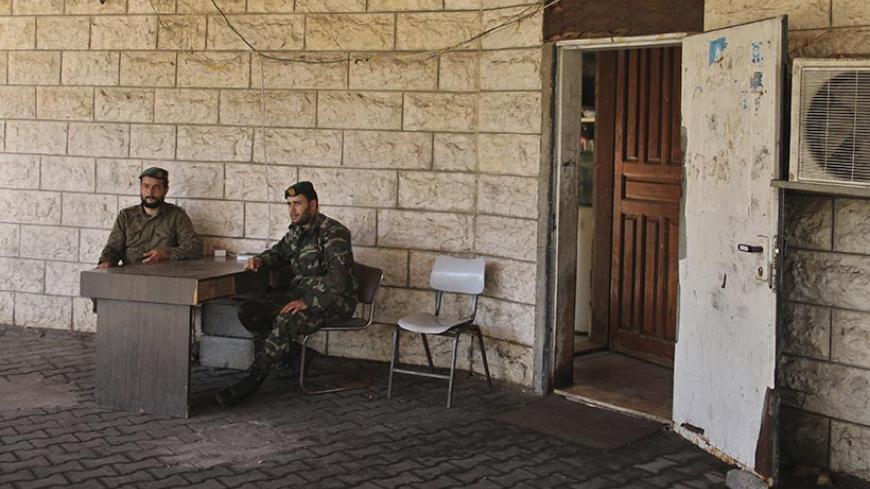 Members of Palestinian security forces loyal to Hamas stand guard at the house of Palestinian President Mahmoud Abbas in Gaza City, while they prepare to hand over the house that Hamas seized during a brief civil war with Fatah in 2007, May 14, 2014. - REUTERS/Mohammed Salem

Fatah members in the Gaza Strip are afraid to speak openly. When they ruled Gaza, some held high-level positions in the security apparatuses. Then came Hamas’ coup in 2007. Those who were not able to flee from the Gaza Strip to the West Bank were subsequently subject to severe restrictions and were followed constantly. From Hamas’ point of view, members of Fatah are not to be trusted even in the present reality of a unity government and reconciliation. Thus, Fatah members are under constant suspicion.

With the beginning of Operation Protective Edge, Fatah members in Gaza were forced to live under “house arrest.” No one remembered, or wanted to remember, that a reconciliation agreement with Hamas had been signed and a unity government had been formed only a few weeks earlier. The hatred between the two organizations was so abysmal that even when the Israel Defense Forces (IDF) pounded the Gaza Strip, Hamas members had no mercy on Fatah operatives.

The great tension that exists between Hamas and Fatah (tension that has recently spilled into the West Bank as well) can be understood mainly in the context of the Hamas movement's situation in the days after Operation Protective Edge. There is a tremendous gap between the declarations of the movement’s leadership regarding a great victory over Israel, and the perception of most of the Palestinian public in Gaza regarding the war’s end results. While Hamas employees in the civil service did receive their wages, many sections of Gaza, in the north and south, have been completely ruined. Gaza Strip residents hear constantly about rebuilding and assistance and an end to the stifling blockade, but on the ground nothing has changed. The prevailing mood is that the situation in the future will be much the same as in the past.

The minute after the cease-fire was proclaimed on Aug. 26, Gaza mostly disappeared from the headlines. The interest of the global media in Gaza declined significantly, and the residents returned to their day-to-day, existential struggle for survival.

A Fatah source in the Gaza Strip, who has known better days, agreed to talk to Al-Monitor on the phone. On condition of anonymity, he recounted what he and his close friends have recently gone through, and are still going through.

Al-Monitor:  There are reports that Fatah operatives were shot in their knees by Hamas during the military clashes with Israel. Can you verify this?

Fatah source:  There were confrontations between Hamas and key Fatah operatives. They wouldn’t allow us to meet out of fear that we were conspiring something against them. You have to understand that these days, Hamas’ biggest concern is with regard to spies — and they aren’t the only ones with this worry. In some of the confrontations, there was shooting and some Fatah members were hurt, but I can’t tell you that it was systematic.

Al-Monitor:  Were your “house arrests” systematic?

Fatah source:  Yes, already on the first day of the war I got an order not to set foot outside the house. We saw and heard the explosions, but they wouldn’t let us leave [our homes].

Al-Monitor:  What logic was there to keep you at home?

Fatah source:  Like I told you, Hamas was afraid that we’d spy — that we would transmit information to the Israelis. But believe me, during the war in Gaza no one would even think of such a thing. On the contrary, we even wanted to help Hamas.

Fatah source:  Israel went totally crazy, entire families were killed, friends of ours and relatives. Sons of friends were wounded, houses were destroyed and we weren’t allowed to do anything — only sit and pray.

Al-Monitor:  Would you have enlisted to fight against Israel?

Al-Monitor:  Let’s go back to Hamas and the tension between you. The war is over, are you going back to a normal life and to reconciliation?

Fatah source:  What reconciliation? It’s all over, soon it will all blow up. The distrust between the two sides is so great that no reconciliation can happen. It’s forbidden to talk to us and meet with us.

Al-Monitor:  That’s how afraid they are of you?

Fatah source:  That’s because, meanwhile, no one has the courage to dismantle the partnership.

Al-Monitor:  As part of the cease-fire agreement, Fatah members are supposed to supervise the crossings and serve as a buffer between Egypt and Hamas. Do you have the ability to do this?

Fatah source:  I don’t know what will be or how. I’m also not sure that Fatah members in Gaza will monitor the border crossings at Rafah or Kerem Shalom. Hamas hasn’t let us raise our heads for almost eight years, they won’t agree to let us supervise them. Maybe Fatah members from the West Bank, or from outside, will come — I don’t know. The rupture between us and Hamas only widened during the war. If they made the effort to detain us during the war when Gaza was being bombed and shelled, there is nothing to talk about.

Al-Monitor:  Gaza residents are trying to mend what is left of their previous lives.

Fatah source:  People in Gaza are convinced that another war is likely to erupt in the near future. That it’s not over yet.

Al-Monitor:  That will happen only if Hamas will renew its rocket fire on Israel.

Fatah source:  I don’t think they will dare shoot after everything they went through. But if there will be no change, if the residents continue to live with the blockade, in the end it will happen and the violence will return. With rockets, even stones. There is nothing to lose.

Al-Monitor:  Do you have anything to lose?

Fatah source:  Especially us. We have already lost twice.