Tweets from Gaza show Israel other side of war

In an interview with Al-Monitor, Israeli social media analyst Orit Perlov discusses how social media provides a look at Gazans' experience of the war and what they really think of Hamas and the Palestinian leadership. 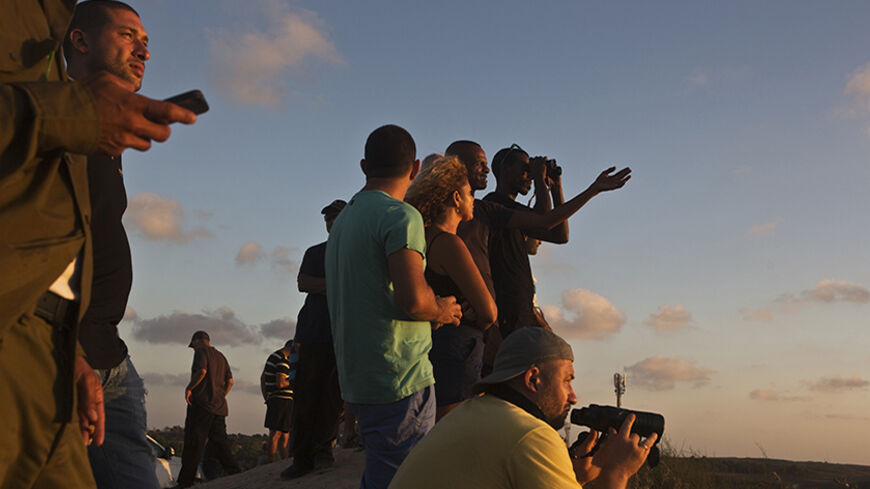 Israelis look over the northern Gaza Strip from a lookout hill near Sderot July 13, 2014 -

“I want to survive, and if I don’t, remember that I was not a Hamas man or a fighter. I wasn’t used as a human shield, either. I was home.” This tweet came from a young Gaza resident the night of July 23, as the Israeli air force was bombing Gaza. It caught the attention of Orit Perlov, a researcher at the Institute for National Strategic Studies (INSS) and an expert on analyzing Arab societies through social networks. Perlov was quick to retweet it and even posted these words of despair on her Facebook page. She wanted to expose the Israeli public to a different perspective. But most of the Israeli responses were not empathetic. One suggested that the despondent young man organize his friends and launch an Arab Spring against Hamas.

In an interview with Al-Monitor, Perlov says, “This is one of the sadder tweets I’ve come across. It reflects despair and hopelessness. After all, what do they have in Gaza? 45% unemployment, intermittent power and water supply and now a third war within six years. It’s a society seeking to survive. I call it ‘Gaza Ghetto’ because that’s how they feel, and I don’t argue with people’s perception of themselves.” Such descriptions of the difficult climate in Gaza emerge from the social media all the time, and Perlov constantly monitors them.

She recounts, for example, that “The Gazans distinguish among eight different types of Israeli bombings. There’s a bomb that starts with a shriek and then a boom — that means it fell far away. If you hear a boom, it fell nearby. There are small shells that fall before the big shell, like a kind of warning. They don’t hide, of course, because they have no shelters. Anyone reading the tweets from there will do so with a heavy heart.”

Since the start of Operation Protective Edge, Perlov has increased her presence on the networks in Egypt and Gaza. That way she manages to gain insights and interesting assessments of how Hamas is conducting itself, many of them different from those expounded by experts and pundits in the Israeli media. As she explains in a recent report she compiled for INSS, Perlov has been looking at the networks for answers to several questions, among them why Gaza’s residents, most of whom opposed to Hamas, don’t take to the streets to demonstrate or rebel against its rule.

According to Perlov’s analysis, Gazans are sick and tired of Hamas but they do not rise up against it because they see what happened to dissidents in Syria, Iraq, Bahrain, Iran and Turkey. “They simply get shot,” she says. “The public in Gaza rightly assumes that the weapons are in the hands of Hamas and know they will end up dead.” Perlov explains that this is a public exhausted by seven years under siege and does not believe it is capable of toppling the Hamas regime and creating a better alternative, saying, “They are scared of chaos and the infiltration of jihadist elements.”

Perlov also explored the question of whether Palestinian Authority President Mahmoud Abbas is perceived as an alternative to Hamas in Gaza. She discovered that the Palestinian public is not interested in his leadership. “When Abbas sent his health minister to Gaza to find out what kind of help they need there, his car was stoned and the streets of Gaza were spray-painted with graffiti calling Abbas a traitor and a mortal target.”

Perlov says Israel’s basic assumption that Hamas is in dire straits and waging a struggle for survival emerges from the networks, as well. The organization has lost the support of Gaza’s residents and has not managed to generate a public uprising against Israel. Operation Protective Edge has only increased the organization’s weakness, dealing a heavy blow to its infrastructure, while the Iron Dome air-defense system makes the Israeli home front resilient and renders Hamas' rockets relatively irrelevant.

The organization’s strength lies in the fact that Israel and Egypt are not seeking its complete collapse, which gives it a type of insurance policy. Nonetheless, Perlov believes that Hamas has reached the end of the road and that “It has perhaps put us through the wringer in the short term, but in the larger scheme of things it is on its deathbed and behaves like one who has nothing to lose.”

Al-Monitor:  What do we Israelis not see and not know regarding events in Gaza these days?

Perlov:  For example, that the majority don't take to the streets. It’s not true that they demonstrate against us. I don’t know of a single protest recently that was attended by more than a few hundred people. 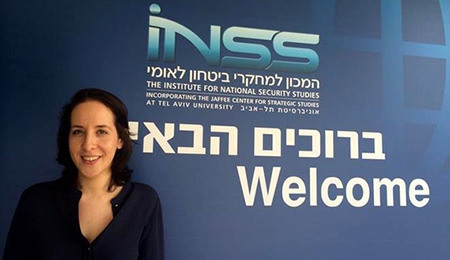 Orit Perlov is pictured at the Institute for National Security Studies in Tel Aviv, April 13, 2014. Photo by INSS

There’s a problem with the supply of clear water. They only get water once in five days. There are no schools, no shelters, no warning sirens, no protection — there’s no civil society in Gaza. The power supply is intermittent, too: only four hours at a time and at night, when the Israeli air force attacks, power is cut off. Most of the public in Gaza are good people and my heart goes out to them even when they curse us, because they are in such a low place that makes them lash out.

Al-Monitor:  Do you detect sympathy for the Palestinians on the part of Arab states?

Perlov:  No, the solidarity is completely dead. There are no protest demonstrations. The era in which an Arab state would go to war for a neighbor state is over. Arab solidarity is over; everything is local. The Palestinians have been left on their own, that’s the truth. At most they’ll get a hashtag on the network.

Al-Monitor:  How are the social networks doing during the war?

Perlov:  When there’s no war, the dialogue is much more coherent and has more depth. In general, the Palestinian dialogue on the networks is not so deep because this is a very young society. 50% of the population in Gaza is younger than 18. At that age, everything is emotional. During the operation they are busy documenting the atrocities of the demolished houses, the wounded children. They take pictures and post them on YouTube. It’s shocking, of course. It’s very easy for me to tell which pictures are edited and processed to add too much smoke, and which is authentic material. People are very involved in counting casualties: how many children, how many adults, by name. There are also warnings of bombings because they have no sirens.

Al-Monitor:  Before the start of the current round, were there any indications on the networks of war breaking out in Gaza?

Perlov:  When the kidnapping affair began [in June], it was very clear that this was heading for Gaza. Before that, Israel tried to disrupt the reconciliation agreement and the Palestinian unity government. As far as Israel is concerned, there was only one address for the kidnapping: Hamas. And no one was distinguishing between Hebron Hamas and Gaza Hamas. Israel’s prime minister came and said that he does not accept the unity government, and after the three teens were kidnapped, he laid the blame on Hamas. A discourse then started in Gaza which said, ‘This has nothing to do with us.’

You have to understand that the Gaza networks are the only tool that enables a democratic and egalitarian discourse, because Hamas has yet to really figure out what goes on there, and that’s why the networks enjoy relative freedom. It was possible to detect that Gaza knew it was about to take a hit, and from the minute the operation began in the West Bank [to locate the kidnapped teens], it was very clear that Gaza would be drawn into this circle very quickly.

Al-Monitor:  How was the unity government received in Gaza?

Perlov:  Everyone wanted it. The public in Gaza wants anyone who can provide it with an opening and movement, although both Hamas and Abbas are perceived as very corrupt, and the public has stopped believing in both. There was a lot of graffiti against Abbas, who moved his whole family to Jordan. It was clear that he was in a very difficult situation. He is perceived as a collaborator with Israel. His trip to Saudi Arabia in the middle of the offensive stirred great anger. There were many calls on the network to kill him and Facebook pages that made him fair game. The more he cooperates with Israel, the more he loses legitimacy. Abbas wanted the unity government because, like Hamas, he needed air, and we too bear responsibility for this. From the minute the nine-month deadline for the negotiations with him expired and he was unable to free prisoners, he had to find a way to obtain domestic legitimacy.

Al-Monitor:  Do you see signs of a third intifada?

Perlov:  There won’t be a third intifada, because there aren’t enough people willing to take to the streets. Hamas hasn’t managed to get people out and it seems that this tool is limited and worn.

Al-Monitor:  To what extend does government corruption figure on the network?

Perlov:  During the past year there was repeated criticism of Hamas, that people were sick of it, that the situation was deteriorating, and about the corruption. The Hamas leadership knew it was losing its legitimacy and that’s why it had an interest in a unity government. In all the conversations I had, the big bloggers who shape public opinion always raised this criticism. Most of the public has harsh criticism for the organization, but they will not topple the regime because they are afraid the regime will shoot them.