Israeli social media analyst: 'no desire for a violent intifada'

In an interview with Al-Monitor, social media analyst on trends in the Arab world Orit Perlov claims that Israelis often depict a black and white picture of their neighbors, unaware of the complexity of their society. 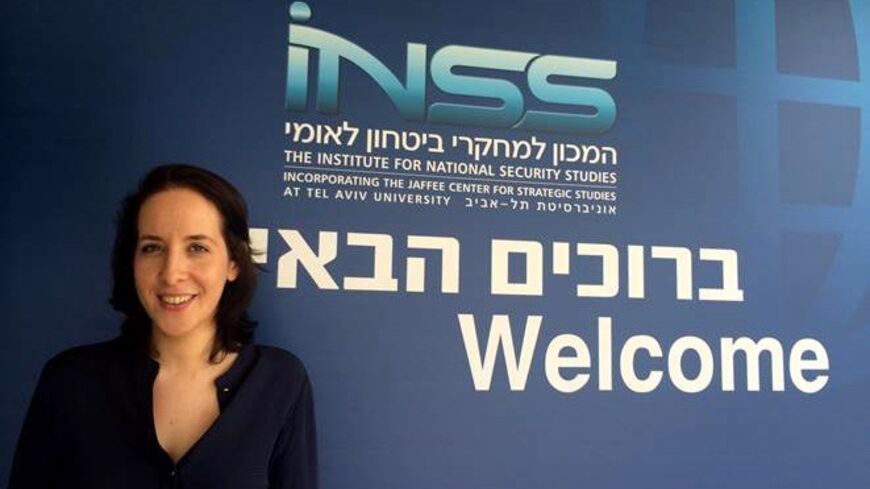 Orit Perlov, a social media analyst and research fellow at the Institute of National Security Studies, poses at the organization's headquarters in Tel Aviv, April 13, 2014 - INSS

“We Israelis love talking about peace, but we’re less interested in what goes on with others. On April 11, I spoke at a policy conference of senior Labor Party figures, and I asked them why they keep running off to Europe to meet with Palestinians, when they could be talking to them every day on the social media networks.” This insight was provided by Tel Aviv  resident Orit Perlov, 33, a researcher with the Institute of National Security Studies (INSS) and an expert on analyzing developments and in-depth trends in Arab societies, using social media networks.

Perlov spends her days following bloggers and opinion-makers in neighboring countries and talking to them on said new media. Her Arabic is excellent, the result of a year and a half living in the Arab city of Umm al Fahm. She communicates directly with the most prominent activists in Arab states, which makes her one of the most up-to-date people in Israel regarding trends on the Arab street. These days, for example, she is closely following events unfolding in Egypt, and is able to provide an updated status at any given moment on the inner workings of the Arab street.

Al-Monitor:  What is the current status of events on the Egyptian street, according to your analysis?

Perlov:  In addition to being the largest Arab state, Egypt also has the most politically involved population. A huge number of blogs are published on the networks there. Opinion-makers are active on Twitter, Facebook and YouTube. For me, these are major sources of information.

In the presidential elections two months from now, if there are no dramatic surprises, [Gen. Abdel Fattah al-] Sisi will be the next president. But it’s also clear that he will not last a full term, for two reasons: the economic and security situation, which will both deteriorate further. What comes after him? There’s still no discernible alternative, but it’s also clear that after Sisi’s downfall, the Egyptian military will remain stable. All in all, this is typical of Egypt’s recent revolutions: an old structure is toppled, but no one manages to erect a new one.

Al-Monitor:  Was it possible to detect the trends that brought about former Egyptian President Mohammed Morsi’s overthrow?

Perlov:  Six months earlier, I published an article together with Brig. Gen. Udi Dekel for the INSS, in which we foresaw the collapse. In the article, which was based on an analysis of the situation using the [social media] networks, we estimated that the basis of Egypt’s economic-social pyramid would collapse, which would result in another storm.

The ability to understand the atmosphere in such a direct fashion is wonderful: I can get a high-definition depiction of current events, including nuances. In the past, to understand events in Egypt, one had to rely on the media, on diplomats, on academics and politicians who visited there. This was a small elite. Today, this information is accessible, available and free of charge. Any event taking place there or in another country is an event I can follow on several levels, including commentaries and in-depth analyses of the country’s major activists, opinion-makers and politicians. I knew about the use of chemical weapons in Syria three days before it was made public because it was already on the networks.

Al-Monitor:  Are the Egyptians interested in what goes on in Israel?

Perlov:  No. They’re self -involved. The same goes for the other countries around us, which are busy with their domestic affairs and don’t have any energy to expend on external matters. Egypt is experiencing an implosion. The summer hasn’t even started and already there are many power outages. A bottle of mineral water, for example, costs more there than filling up gasoline. Hence, we don’t interest them.

Al-Monitor:  If that’s the case, is Israel a lot less threatened now?

Perlov:  That’s true on the state level. There’s no army that can threaten the State of Israel. But there are other threats, on the part of armed militias that will be activated against us — these are groups that have an interest in wiping out the nation-states, groups that want Islamist chaos.

Al-Monitor:  I apologize in advance for such an Israeli-focused question, but is there any country in the region that is interested in us?

Perlov:  Actually, yes. The Palestinians are very interested, and one can see a desire on their part to talk. They mostly engage in dialogue with Israeli Arabs, because of the language, too, of course. You’d be surprised, but the community that talks the most with the Palestinians online is that of the settlers. I find a lot of dialogue about narratives and national rights, especially between young people from Gaza and settlers. In general, Gaza is a very young society — 60% of its 1.6 million people are under the age of 25. But what concerns the Gazans most is the electricity and water shortage. The Rafah border crossing has been closed for more than 50 days, so there are supply problems.

The Palestinians in the West Bank mostly talk with the Jordanians, and about Ramallah I can say that it’s a bit like the Tel Aviv bubble. They are mostly involved with themselves. Recently, I’ve noticed unrest fomenting in Jenin with the rise in unemployment.

Al-Monitor:  In your opinion, what will happen if the diplomatic process collapses?

Perlov:  I can see there’s no desire for a violent intifada. This comes across on the networks. Fewer and fewer people believe that violence will achieve the goal. The Palestinians are like the Lebanese: the societies there are very weary after all the wars and bloodshed, and want normalcy. I don’t discern any campaign for a third intifada. In the past year, Hamas has not managed to recruit more than 100 people for its demonstrations, because the public is tired.

It’s very important to me that Israeli society gets a complex picture of the neighbors in the Arab states, that it hears more voices from over there. This is true, too, for the way that Israelis perceive the Palestinians — with the tendency today being to depict a black and white picture, of occupiers and victims, and the public is not exposed to the complex reality. I have the tools to show a more complex discourse, and I believe it will be harder to frighten people this way.

Clearly, it’s easy for a leader to frighten and talk about the enemy and his weapon, and much harder to create content worlds that are complex. It’s important to me in my work to provide a face, color and new content to our neighbors. I present the Arab street to the Israeli public.

Al-Monitor:  Why are Israelis less active in the regional dialogue on social media?

Perlov:  First of all, because most of the Israeli population doesn’t speak Arabic, and most of the activity is in Arabic. The Arab citizens of the State of Israel are on Twitter because it’s easy for them to communicate. So there’s the language barrier, especially on Twitter, which is a tool for direct dialogue. Apart from that, Twitter forces you to condense, and the Israelis like to talk, a lot.

Al-Monitor:  What is the thing that most Israelis don’t know about their Arab neighbors?

Perlov:  That the nation-state and the religious issue are growing weaker in all the Arab states. Today, the religious preachers cannot get people to demonstrate. It’s similar to what goes on here, because our civil society, too, is getting stronger, and the individual wants to put himself in the center. In all the countries around us, people are seeking a structural change, because their trust in public systems is eroding.

Al-Monitor:  What kind of power do women have in Arab states, according to social media?

Perlov:  Women are the majority and social media networks enable them to express themselves freely. There’s a phenomenon of very large women’s campaigns that took place this year — the women drivers campaign in Saudi Arabia and the campaign against sexual harassment in Egypt.

Al-Monitor:  Who are the opinion-makers and bloggers on the Arab networks?

Perlov:  Very young people, in their early and mid-30s, they all want to exert influence and change the reality of their lives. These are people with very sharp thinking, with a high level of emotional intelligence. Most of them are men.