In an interview, Shimrit Meir, editor of Al-Masdar, talks about the recently launched website backed by the Israel Project in which Jewish and Arab reporters attempt to reveal Israel's complex reality. 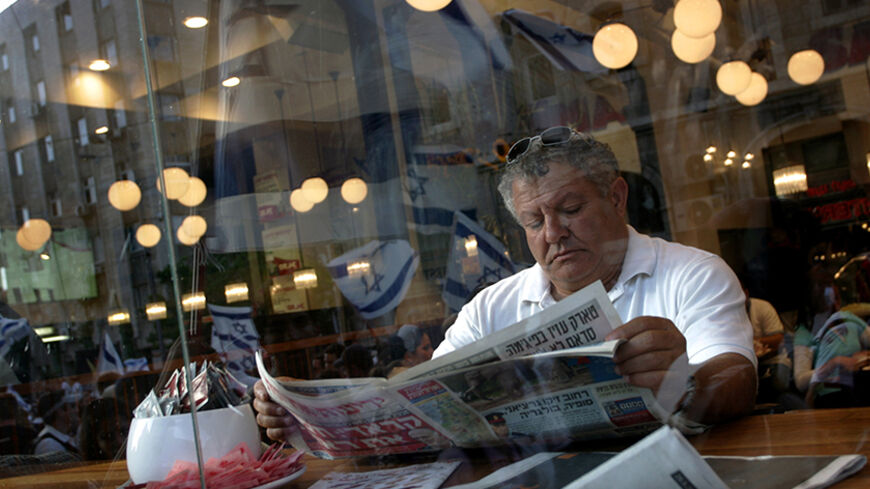 Israelis waving national flags are reflected in a coffee shop window as a man reads the newspaper during the annual Jerusalem Day parade in Jerusalem, May 25, 2006. - REUTERS/Yonathan Weitzman

Around the desk of Shimrit Meir, editor of Al-Masdar (The Source) website, daily discussions are held on terminology for describing events from the chronicles of the Israeli-Palestinian conflict. For example, it was decided to use “amalya,” the Arabic word for “act,” in reporting on and describing terrorist actions against Jews, because “terror attack” would offend a great number of Palestinian readers. After deliberations, Meir had decided on a neutral term, which was used to describe the murderous synagogue attack in Jerusalem’s Har Nof neighborhood on Nov. 18, so Palestinian readers would not abandon the site.

Meir, a 35-year-old resident of Tel Aviv and former Arab affairs correspondent for Israel Army Radio, heads a web-based journalism initiative that targets the large audience of Arabic speakers. The goal is to bring reporting and voices from Israel into the Arab world without censorship and to become a source of credible, up-to-the-minute and direct information about the complex and stormy reality of Israel. Al-Masdar is part of the Israel Project, a pro-Israel public diplomacy organization founded in the United States at the height of the second intifada.

The new media revolution of recent years enables such direct appeals to the Arab public in its own language and the marketing of original content produced by a team of Jewish and Arab Israelis from a bureau on Rothschild Boulevard, in the heart of Tel Aviv. In an interview with Al-Monitor, Meir spoke about the project and the vision of promoting a shift in Arab public opinion about Israel.

Al-Masdar editor-in-chief Shimrit Meir with her staff members at the newspaper's office in Tel Aviv, 2014 (Al-Masdar)

Al-Monitor:  How did you at Al-Masdar cover the suicide of [Palestinian bus driver] Yousef Hassan Ramouni [Nov. 16], which was described in the Palestinian media as a murder by settlers and generated a wave of wild incitement?

Meir:  Initially, before the circumstances of his death became clear, we followed up on the story and ran an article headlined “Who killed the Palestinian bus driver?” We presented the claims by both sides. Only when the results of the autopsy emerged, and by all accounts it was clear we were dealing with a suicide, did we publish that information. We were careful to present the facts, the report of the forensics exam and the fact that a Palestinian pathologist was also present and signed off on the findings.

We put the story in a prominent spot on the homepage. It was at the height of this mess, and we were the only Arabic media to reflect the content of the investigation in a straightforward way. We tried to be balanced, because if we aren’t, we risk becoming irrelevant. It was important because the coverage in the Palestinian media fanned the rioting and the incitement, claiming that it was a case of murder by settlers. We made an effort to be balanced and to present both sides with empathy. This is exactly where we come into the general brouhaha on the networks, with matter-of-fact reporting. You keep seeing how people aren’t interested in facts and want to hold on to their narrative. That was true in this case, too. People weren’t interested in the details of the autopsy, and the case of a suicide was used to generate incitement.

Al-Monitor:  And how do you deal with cases of harsh words and racism on the part of Jewish Israelis?

Meir:  We don’t go easy on them. Because, once more, if we ignore it and don’t report about it, we will lose relevancy and defeat our goal. So we deal with it extensively, but we present the whole picture — that alongside the racism, there are many Israelis who wash their hands of such behavior. For example, on Monday [Nov. 24] we ran a story that quickly became very popular among Israeli Arabs, dealing with [alleged] racism against Arab Israeli taxi drivers employed by Get Taxi. The story generated a storm on the networks after a passenger called for a boycott of Get Taxi until the company stops employing Arabs. So we told the story and also reported about numerous Israelis who came out against this racism. Of course, we report on price-tag attacks by settlers when they occur. The Arabs read about Israel all the time, but they don’t get firsthand reporting. We bring them the news in Arabic from Israel. Generally, there is an iron wall of mediation by an editor in Doha, London or Ramallah. We provide content, without this go-between, out of the bureau in Tel Aviv.

Al-Monitor:  Who is your target audience? How big is it in network numbers?

Meir:  We have a Facebook community that is constantly expanding and already numbers 1.8 million followers on two Facebook pages: Israel Uncensored and the Al-Masdar page. Most of them are young people, aged 18 to 34; 75% are male and 25% women. About half our readers are Egyptians, followed by Palestinians, Jordanians, Saudis and Lebanese. The number of Israeli Arab readers is relatively small because so far we haven’t related to them specifically as a target audience, but that’s about to change. It’s important, especially at this point in time, because there aren’t too many alternative sources of reliable content for Arab Israelis who are interested in events in the region, in terms of politics as well, because Arab media outlets are very biased against Israel and far away from where events are happening.

A dialogue is conducted through the web, and on eventful days we have to deal with quite a few instances of incitement. In principle, we try to avoid erasing comments, and we do so only if it’s a case of wild, anti-Semitic incitement. We have tremendous growth potential the more Facebook increases its penetration into the Arab world.

Al-Monitor:  How do you relate to Al-Masdar? As a mission or as journalism?

Meir:  The two aren’t mutually exclusive. I think the most important thing in these times, when the Israeli and Arab media are fanning the winds of hatred and war, is that we try to be a voice of reason, to float other voices, to write critically about the incitement and the harshness. Now, of all times, when a wild, third intifada is taking place on the networks, we have a job to do and a challenge.

After the terror attack at the synagogue, along with the reporting, we also dealt with the situation in East Jerusalem. We explained the difference between residency and citizenship. I sent out two reporters: Amar Daka, who is a Jaffa Muslim, and Hadas Haroush, a Tel Aviv Jew, to report from the Temple Mount. Each went on a different day and noted their impressions. Of course it came out interesting. This was one of the few times that you could find, in Arabic, a Jewish woman writing in a non-critical fashion about the Temple Mount. The reporting by Amar, as a Muslim who has an emotional attitude about the Temple Mount, was important. He described an encounter with Israeli border police who detained him because he looked to them like a Jew, given that he really has the look of a hipster.

We recently put up a story that got lots of views about the phenomenon of Arab students at Ariel University [in the West Bank] who come from Israel and Jordan. So we looked into why they were there. We came across an impressive group of super successful young people, who are mostly interested in success and a career. Through this you realize that there is no placard of an Arab, just as there is no placard of a Jew.

Al-Monitor:  You appeal to a young audience. What else is of interest to them?

Meir:  We aspire to be contemporary and interesting. We recently ran the story of Alma Dishi, the Israeli actress who was picked as the representative for an underwear campaign and generated a storm on Israeli social media. So we did a story dealing with the model of beauty in Israel, and it generated interest because Dishi has a Mediterranean look. The headline was: “Underwear campaign by a young actress stirs storm in Israel.”

One of the things with which we deal seriously and constantly is the gay community. Khader Abu Seif, a homosexual Arab Israeli blogger, writes a blog for us about his life in Tel Aviv. Our goal is to draw in and create an interest among young people from the homosexual and lesbian community in the Middle East. We also wrote about Zawa Arafat, the daughter of Yasser Arafat, who lives in Malta and apparently speaks broken Arabic. This also generated reactions against us along the lines of how dare we. We also had a story about the social networks being against Palestinian President Mahmoud Abbas. It got a lot of shares. We try to provide material that Palestinians can’t read elsewhere in Arabic.