With elections around the corner, conservative Israeli politicians are feeding racism against Israeli Arabs, hoping to increase support at the ballot box. 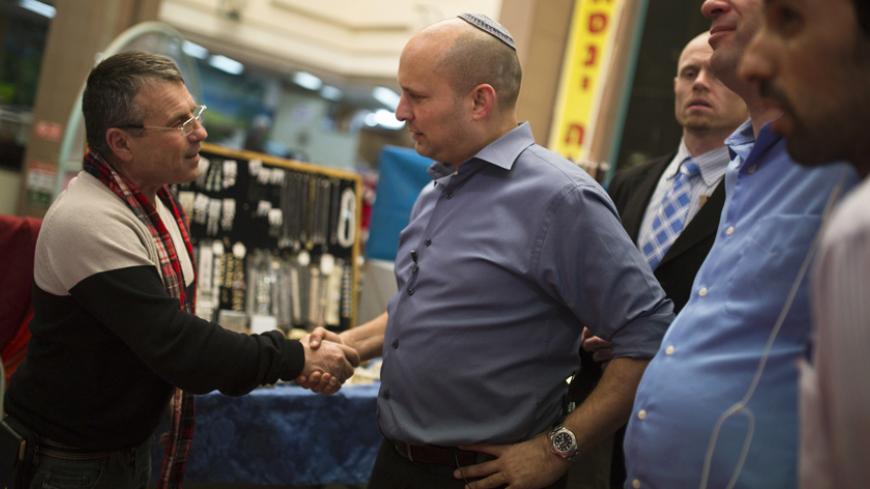 When the 2013 election campaign opened, the young new chairman of HaBayit HaYehudi Party Naftali Bennett was a rather unknown politician who, within a fairly short time, succeeded in making the waning religious party trendy among young secular people. By employing upbeat and positive slogans in the spirit of “something new is in the air” and “Bennett is your bro,” HaBayit HaYehudi was able to win hearts while downplaying the radical right-wing figures on its slate. The election campaign focused to a great extent on Jewish tradition, family values and the cost of living in the zeitgeist of the social protest, with a promise of a better future. The result was a huge success: 12 seats that turned Bennett into a political powerhouse.

Barely two years have passed since then, and 2015 Bennett is a totally different person. Championing an aggressive and nationalistic campaign, he relates not only to the diplomatic context vis-a-vis the Palestinians, but also to the issue of Arab Israelis. To date, this issue has been more associated with Foreign Minister Avigdor Liberman, the chairman of the Yisrael Beitenu Party. Bennett’s Feb. 8 “thieves speech” at Tel Aviv University and the subsequent uproar it sparked is another expression of the nationalistic hallmarks of HaBayit HaYehudi’s current election campaign.

In his address, Bennett observed that internal security within certain areas of Israel has been deteriorating for over a decade. In and of itself, there’s nothing wrong with this assertion, yet Bennett was apparently alluding to areas where Arabs live. Among other things, he offhandedly remarked, “Anyone who’s gone traveling in the Negev in recent years knows that they can’t leave their car … because it will be broken into and stolen." Several students, some of them Arabs, walked out of the auditorium in protest.

A few hours later, Bennett tried to explain in a Facebook post that he wasn’t targeting Arabs. Since then, he has repeatedly protested the racist interpretation of his remarks. His protests notwithstanding, one cannot ignore the fact that his address allegedly besmirched an entire minority that makes up a fifth of Israel’s citizens.

So what prompted Bennett to launch a seemingly inflammatory campaign with clear racist overtones against Arab Israelis? Was it his decline in polls in recent weeks and the shift of votes from HaBayit HaYehudi to former Shas leader Eli Yishai and far-right activist Baruch Marzel’s Yahad (Ha’am Itanu) Party, which stands smack in the in middle of the radical right? Or is it perhaps the war against Liberman for the right, nationalist electoral base? Either way, this is clearly a cold, calculated electoral consideration, because when Bennett declares that he wants the Internal Security Ministry for Knesset member Ayelet Shaked, the message he is trying to convey is that HaBayit HaYehudi will bolster the sense of personal security among Jews living amid a dangerous Arab population.

To a great extent, Bennett’s current campaign is reminiscent of Liberman’s 2009 campaign, with the unforgettable slogan “no allegiance, no citizenship.” Back then, the chairman of Yisrael Beitenu demanded and got the internal security portfolio. To date, this is considered the party’s most successful campaign, producing 15 seats. Since then, Liberman has not abandoned the militant line marked by racist overtones against Arab Israelis. His generalizations and accusations that some Arab Knesset members are either terrorists or terror supporters, as well the legislation he has been promoting and even his diplomatic program “Ariel for Israel and Umm al-Fahm for Palestine,” all convey one clear message: We — Jews — are here on this side and they — the Arabs — are over there on the other side.

Political campaigns aren’t just products of a party’s own ideology. They are the result of polls, studies and the gauging of the general mindset. When more and more parties put Arab Israelis in the crosshairs in either explicitly or implicitly racist campaigns, someone clearly sees this as an effective tool to rally voters. It seems that in recent years, a growing number of right-wing politicians can’t resist the temptation of incitement against Arab Israelis, and the same goes for Likud Knesset members who do the same on a daily basis to garner support. One such person is Miri Regev, who at the beginning of the current election campaign said of the Arab candidate of the Zionist Camp, Zuhair Bahloul: “What I want are Arabs who are not Trojan horses.” In the same breath, she also accused him of supporting terrorism.

The byproduct of this political discourse is disastrous. Elected Israeli officials turn the public more racist and violent, and this is evident in all spheres, including violence on the streets against Arabic speakers, the firing of Arab workers, calls for boycott and incitement on social media.

“Racist campaigns against Arab Israelis aren’t a new phenomenon in Israeli politics. Meir Kahane did the same thing back in the 1980s,” Amal Jamal, the head the Political Science and Communication Program at Tel Aviv University, told Al-Monitor. According to him, what is new is that this racism has become more prominent in politics, whether it’s the bluntness of Liberman, Bennett or Regev or the between-the-lines accusations of the Zionist Camp. “The dam has totally burst,” he opines.

A portion of his interview with Al-Monitor follows:

Al-Monitor:  What expression does it take on in the Zionist Camp?

Jamal:  The new racism uses cultural characteristics to create a moral hierarchy, as opposed to biological racism that has to do with a person’s skin color. By the very fact that a person is an Arab, his skin is already tainted with a certain color regardless of what they say or what their profession is. It doesn’t matter if you’re a physician. As soon as your name is Ahmed, you’re a prisoner of that identity. This is an integral part of this new racism unlike biological racism. What it does is to create a situation whereby we are over here and they are over there, locked up in one inferior moral cage. This is exactly what Bennett did two days ago with his thieves address. He highlighted the danger from Arab Israelis as something that’s on the verge of a terrorist threat. He highlighted the strangeness and dangerousness of the other side. This is a psycho-security discourse that pushes the buttons of intimidation. Liberman uses it aggressively. In the case of Yisrael Beitenu, there’s also the deep-seated sentiment of cultural superiority among the Russian immigrants. This bonds them together in the face of threats.

This can also be found implicitly in the Zionist Camp — first of all by its very name that conveys a message of cultural superiority of a close, superior group. When Isaac Herzog presented the unification with Tzipi Livni for the first time, he talked about her father and his, thus underscoring that they are children of the elite.

Al-Monitor:  Can’t Arab Israelis feel that they belong to the Zionist Camp?

Jamal:  There’s no reason for an Arab Israeli to vote for the Zionist Camp. To my mind, Zuhair Bahloul is a "pet Arab" used to attract votes. There’s no consideration for his identity or the population he represents. What [Yesh Atid leader] Yair Lapid once said about the “Zoabis” and what the Zionist Camp does to Knesset member Haneen Zoabi — it’s all one and the same.

Al-Monitor:  Do these campaigns cause damage that lingers after the elections?

Jamal:  [This summer's] Operation Protective Edge has a clear impact on these elections. The atmosphere of the racist right-wing storm troopers that chased down Arabs in demonstrations is now evident. Bennett’s generalization, which labeled an entire population as felons, is obviously intended to draw votes, because the more racist and vocal you are and the more you define the other side as a threat, the more votes you get. What this goes to show is that there’s a spirit of racism in society that is accepting and supportive of this.