Having garnered fewer votes than expected in the recent election, HaBayit HaYehudi leader Naftali Bennett has put out the word that he'll settle for the Education Ministry, instead of the Foreign Ministry — raising concerns about whether he can serve as “everyone’s” education minister. 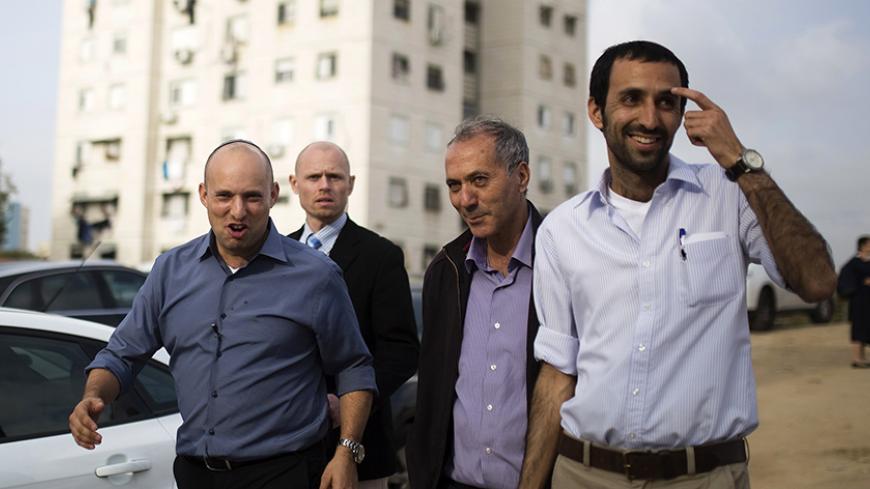 Naftali Bennett’s spokesmen on April 25 announced that the HaBayit HaYehudi chairman had informed the prime minister that he was willing to forfeit the Foreign Ministry portfolio, and instead asked for the Education Ministry. In addition, they said that Bennett had met with former education ministers and CEOs, as well as with school principals.

The day after, Bennett’s associates continued to provide tidbits to the media that were intended to reinforce his miraculous love story with the Education Ministry. This is the same ministry he initially refused to accept at the onset of the coalition negotiations.

New HaBayit HaYehudi Knesset member Yinon Magal told Galei Zahal (Military Radio Station) in an interview that in recent weeks, Bennett told him that “he fell in love with this ministry, and he considers this ministry to have an important role. Sometimes there are things that you don’t always appreciate at first, but then you find out more about it and learn to love it.” It turns out that after the blow he suffered in the elections and the tiring coalition negotiations he endured vis-a-vis Prime Minister Benjamin Netanyahu and the Likud Party, Bennett suddenly saw the light: that the most important thing of all is the education portfolio.

But the real story behind Bennett’s sudden revelation is apparently a lot less romantic. Negotiations between him and Netanyahu began during the election campaign, in the days when Bennett had 15 seats in the polls and he spoke openly about his vision of himself as a future worthy candidate for the premiership. In those days, Bennett demanded the defense portfolio from Netanyahu as part of the alliance they formed; people in Bennett’s circle claim that there had been a basic agreement to that effect.

But Bennett received only eight seats in the elections, a decrease of four from the previous Knesset. In the early days after the elections he demanded the Foreign Ministry portfolio, with the argument that HaBayit HaYehudi had helped ensure Netanyahu’s victory. As far as Bennett was concerned, he wanted the Foreign Ministry (like the defense portfolio in the earlier stage) because that would have given him the stature of a national leader. And that, in turn, would enable him to challenge Netanyahu for leadership of the right-wing camp in the coming elections.

The more days that passed, the more the coalition-forming negotiations between the factions dragged on, the more Bennett began to grasp that the Likud chairman had no intention of giving him the Foreign Ministry under any circumstances. At the same time, the HaBayit HaYehudi chairman faced problems on his home turf in the form of seeds of a rebellion in his party. Slowly, Bennett internalized his new, problematic circumstances: He's forced to restore the peace in his political bastion, while he must acquit himself honorably in the coalition negotiations and present achievements. He realizes that he can portray the education portfolio, together with two additional portfolios he’ll receive in exchange for bringing his eight seats into the coalition, as an accomplishment for the national-religious sector that provided most of the votes for HaBayit HaYehudi Party.

And that’s the upshot of the entire story: At the beginning of his political life, Bennett did everything possible to present himself as leader of the entire Israeli public. He emphasized his high-tech career and his army service in the prestigious General Headquarters reconnaissance platoon. He appealed to secular youths and chose a social-economic agenda. But after his setback in the last elections, he was forced against his will to return to the sectorial agenda of the historic Mafdal [mother party of HaBayit HaYehudi]. In the past, the Mafdal traditionally requested the education portfolio to benefit the sector’s institutions. Meanwhile, Netanyahu has not yet given an answer to Bennett’s request for the Education Ministry portfolio, but the educated guess is that he will agree. This is under the assumption that he really wants the HaBayit HaYehudi Party in his coalition, and hasn’t closed a secret deal with the Zionist Camp. But the latter scenario looks less and less realistic as we approach the final date for presenting the new government May 4.

Even as the identity of the future education minister becomes clearer, one last question remains: Why is this portfolio considered relatively unimportant in these elections? Only in recent days, after it emerged that the Finance and Foreign Ministry portfolios have been parceled out already, did Bennett and senior Likud member Gilad Erdan began to fight over the education portfolio.

The Education Ministry has a huge budget; its 2014 budget was 44 billion shekels ($11.3 billion), Israel’s second-largest budget after defense. Nevertheless, it has limited attractiveness because it is obvious that Israel’s educational system is in drastic need of fundamental, long-range reforms. Yet, these reforms cannot be prepared and implemented in a short term of office, when faced with the strong labor organizations that unify most of Israel’s teachers.

In addition, a question mark hovers over Bennett’s suitability for the role of education minister. Bennett is the leader of a sectorial right-wing religious party, with a clear partiality toward the settler community. In the two years in which he served as a government minister, Bennett never hid his deeply held religious right-wing worldview. In the election campaign he even got into trouble with a statement termed racist when he hinted, while facing Arab students in a panel, that the car thieves in the country’s south are Arabs. We also recall his problematic choice of words in 2014 when he called the conflict with the Palestinians “a shrapnel in the butt.”

Bennett’s agenda does not bear good tidings for the Israeli state educational system, whose most severe problem is, according to most of the research studies, budgetary discrimination between the various sectors of the educational system. The function of the education minister, with no connection to his/her identity or political association, is to work toward enhancing pluralism, narrowing gaps and increasing equal opportunity to assist students from weakened populations.

In an interview with the Army Radio Station, Arab Student Council Chairman Mahmud Agbaria expressed his concern over Bennett’s appointment and called for preventing it. “A person who calls Arabs thieves, and boasts about killing Palestinians, is not worthy to head an educational system that teaches values, tolerance, culture and respect,” he said.

Bennett is probably not the best person for the role of education minister in a divisive, clannish state like Israel, but it does seem that political constraints will lead him to this important, sensitive role. We must hope that he will succeed in rising above political-sectorial considerations and serve, instead, as the education minister for “everyone.” That will be his true test of maturity. Otherwise, the worries of student Agbaria will prove to be justified.