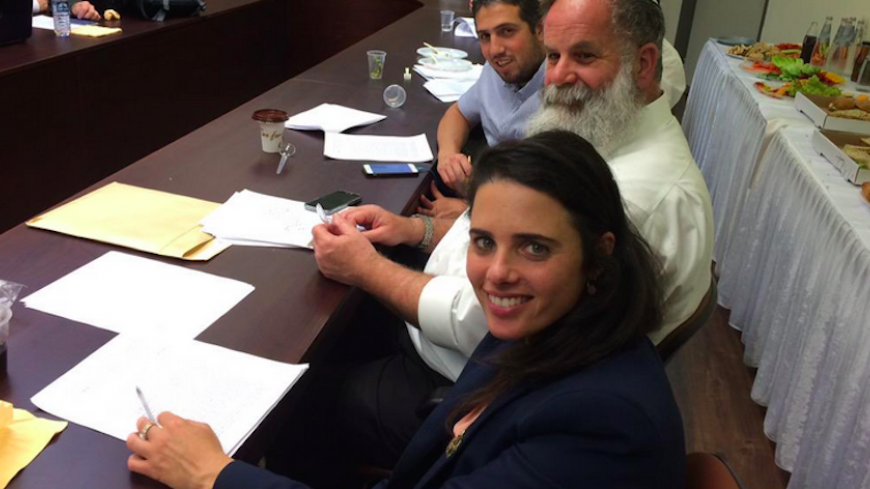 Ayelet Shaked (front) is seen attending a meeting in this picture dated May 6, 2015. - Twitter/@Ayelet_Shaked

In the winter of 2008, Ayelet Shaked, the current justice minister-designate, left her job as office manager for the then-leader of the opposition, Benjamin Netanyahu, after serving in the post for less than a year and a half. Actually, Shaked “fired herself,” just three days after the office chief of staff, a young high-tech millionaire named Naftali Bennett, left under similar circumstances. He had a bitter argument with Sara Netanyahu, wife of the opposition leader, that affected his working relationship with Netanyahu himself. It was easy to see how it would all end.

The beginning of this saga was actually quite promising. After the 2006 Lebanon War, when it looked like the Kadima government was about to fall, Netanyahu, as chairman of the opposition, put together an office dream team that was supposed to accompany him all the way to the Prime Minister’s Office. Shaked, from Tel Aviv, was then a computer engineer working in a high-tech company. Raised in a Likud family, Netanyahu and his wife selected her to serve as his office manager. Both Netanyahus had interviewed her for the job. Later, they recruited Bennett, a member of the religious nationalist community and an officer in the Matkal commando unit, the same unit in which Netanyahu had served years before.

The pair of them, Shaked and Bennett, didn't quite fit the profile of the other members of Netanyahu’s team. They came from outside the world of politics; they were young; and they both had successful high-tech careers. The good times quickly came to an end. Both Bennett and Shaked proved to be highly independent-minded and refused to go along with every whim of Sara Netanyahu. Arguments often reached fever pitch, with the two hires demanding that Netanyahu limit his wife’s involvement in office affairs. They considered Sara detrimental, and precious time was being wasted trying to deal with her. They did not like her involvement in setting Netanyahu’s daily schedule or her demands that they cancel meetings or his participation in various events because of family or other considerations.

There was something else as well. Netanyahu went behind Sara’s back to “fill in” Shaked’s salary, because the Likud Party’s budget to employ her amounted to just a few thousand shekels. As soon as Sara found out about it, there was hell to pay. By this stage, her relationship with Shaked and Bennett was already on shaky footing. From then until their being forced out was only a matter of time.

Meanwhile, Bennett and Shaked had come to love politics. They would not sit quietly on the sidelines. Together they established a right-wing extra-parliamentary group called My Israel, and together they took over HaBayit HaYehudi and turned it into a trendy party. In the last primaries, Shaked won the first-place slot even though she is secular. She's Bennett’s right hand in the system and a popular figure who wields considerable influence over party affairs.

It is one of the great vicissitudes of fate that these very people reappeared in the prime minister’s life, wielding immense political power. He needed them desperately, so much so, in fact, that without them he wouldn't have had a government.

The first time this happened was on the eve of forming the 2013 government, when Bennett’s “alliance of brothers” with Yesh Atid head Yair Lapid forced Netanyahu to bring him into his government as economy and trade minister and a member of the Security Cabinet. Although the two men managed to maintain a reasonable working relationship, the prime minister’s loathing and contempt for his former protege hardly disappeared. In fact, they only grew stronger.

Now, it has happened again. Netanyahu was sitting on top of the world after winning 30 seats in the March 2015 elections. He wasn’t even thinking much about HaBayit HaYehudi in his coalition negotiations. Then everything flipped.

Former Foreign Minister Avigdor Liberman’s bombshell announcement that he would not join the government turned Bennett into the person Netanyahu needed to form a coalition. In other words, Netanyahu was suddenly vulnerable and easy to extort. In fact, he was so susceptible to extortion that even in his worst nightmares, Netanyahu never imagined being forced to hand Shaked the Justice Ministry just so he could cobble together a narrow and vulnerable government of only 61 seats and that he would only be able to do it at the very last minute.

Netanyahu regards that particular portfolio as especially sensitive and prestigious. It is a senior portfolio that Netanyahu wanted to give to someone from his inner circle in the Likud, most likely Intelligence Minister Yuval Steinitz. Instead, he was forced to give it to Shaked. Netanyahu resorted to all sorts of maneuvers to strip the ministry of substance and hand it to Bennett or someone else, but Shalom Shlomo, who led the negotiations for HaBayit HaYehudi, insisted that Shaked receive the appointment. Of note, Shlomo was Netanyahu’s political adviser when Shaked and Bennett worked in his office. In other words, he was fully aware of how hard it would be for the prime minister to accept this act of defiance.

Thus, on Shaked’s 39th birthday, she received the justice portfolio, a post she never dreamed of holding. Just two days earlier, she had met the highly regarded singer Yehoram Gaon while paying a condolence visit to former Culture Minister Limor Livnat, who had just lost her father. Shaked, thinking she would be appointed minister of culture, used the occasion to ask Gaon for advice.

Since the announcement of Shaked’s appointment, senior figures in the Justice Ministry have been wandering about listlessly, as if it were the worst thing to ever happen to them. They will have a right-wing minister who has been open about her agenda to diminish the power of the Supreme Court and make changes to the bench. She will chair the Committee for the Appointment of Judges and appoint the next attorney general. If there is any consolation for the senior staffers, it is that Shaked’s appointment is even harder for the prime minister himself. It is so hard for him that at the well-covered announcement that a coalition agreement would be signed with HaBayit HaYehudi, Netanyahu could not hide his disdain. He completely ignored Shaked, not even deigning to shake her hand, all in front of the cameras.

People who think that the Netanyahu-Shaked relationship will thaw over time have no idea what they are talking about. The two will maintain a correct working relationship at best. It is true that Netanyahu will have to meet with Shaked at least on occasion. He will have to speak to her on the phone and see her in Cabinet meetings. Nevertheless, he will limit his contact with her to as little as possible.

Shaked will be only the second woman to serve as justice minister, the other having been Zionist Camp co-leader Tzipi Livni. She will be the youngest justice minister to date and one of only a handful lacking any training in the law. Nevertheless, make no mistake about it, she is a very talented, intelligent woman with an impressive ability to learn and excellent interpersonal skills. Shaked is not some provocateur. During her time in the Knesset, she displayed considerable discretion while staying focused on her goals. In some way, she is the face of the changing of the guard in Israeli politics.