Even before negotiations have started, Prime Minister Benjamin Netanyahu must struggle with his future right-wing coalition partners, a situation which might encourage him to further explore the possibility of a unity government. 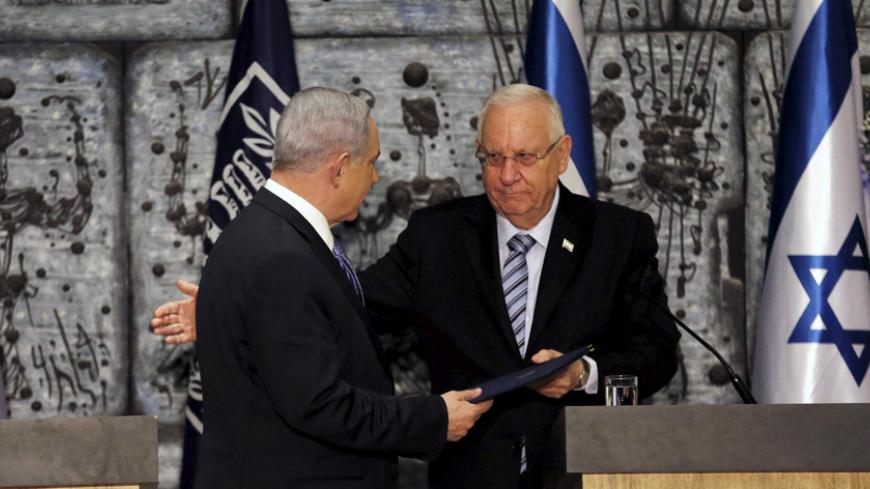 It was a chilly, reserved reception at the President’s House on March 25, when Israeli President Reuven Rivlin charged Prime Minister Benjamin Netanyahu with the task of forming a new government. It was a sign that the coalition negotiations were getting off on the wrong foot.

There was nothing festive about the ceremony. Netanyahu was simply granted the task again, making it the fourth time in his career. Rivlin’s body language relayed the sense that he would much rather have given the job to someone else. But it wasn’t only the president, who looked worried. The prime minister himself seems to show that despite his sweeping victory in the polls — probably by much more than he could have imagined — this new term brought with it all the same old problems of cobbling a coalition together. In fact, Netanyahu finds himself without a clear agenda as he heads toward a right-wing coalition with the ultra-Orthodox. And the task of forming that coalition appears to be a complicated one.

In February 2013, when former President Shimon Peres charged him with forming a coalition, Netanyahu announced that his new government’s first task would be to stop the Iranian nuclear program. It was practically the only task of the government he had formed with the former Labor Party Chairman Ehud Barak back in 2009. This time, however, having defeated the Zionist Camp led by Isaac Herzog and Tzipi Livni, he finds himself facing a new political reality, without an agenda and without a plan.

In his speech at the President’s House, Netanyahu spoke in generalities about his government’s mission, saying, “The next government will be faced with two challenges: Building up our security and improving our social welfare.” He made a commitment to act in the spirit of the social protests and the agenda set forth by his intended Finance Minister Moshe Kahlon, by lowering the cost of housing and dismantling the monopolies. He promised to keep fighting the nuclear agreement taking shape with Iran, but at the same time, he also sent a conciliatory message to Washington.

So, Netanyahu’s speech was completely unfocused. It contained no commitment to advance an agreement with the Palestinians. All it had was a general, noncommittal statement: “Our hand is extended in peace to our Palestinian neighbors.”

Now that he has had a chance to get used to and even revel in his unequivocal victory, Netanyahu is starting to realize what it really means to face the world at the head of a right-wing government, and how such a government will affect the deteriorating relationship with the United States. Throughout his campaign, including the last two days, Netanyahu hoped for close results that would enable him to head a national unity government with Herzog. Though he announced that he would not form a government with the left, that seemed like the most reasonable option at the time.

Now, the 30 seats that Likud was so surprised to receive are starting to feel like a major headache. Senior party members have developed a growing appetite for top government posts, and have even started calling on Netanyahu, both behind closed doors and in the media, to leave the most important ministries in the hands of the Likud. Nevertheless, it looks as if the Foreign Ministry will remain with Avigdor Liberman, even though he came away from this election with only six seats.

Meanwhile, on the Netanyahu-Moshe Kahlon front, things seem to be grinding to a halt. The bad blood, which was so characteristic of their relationship in the last two years, is starting to froth all over again. Kahlon’s decision to blow up the talks with the Likud Party before they even began indicates that this will be no easy process. Just like Rivlin, Kulanu Party Chairman Kahlon had hoped that the election would allow him to join a government headed by Herzog. Should that have happened, his revenge against Netanyahu would have been perfect. But even in the current scenario, Kahlon holds the key to forming a government. As such, he has no intention of making Netanyahu’s life any easier.

Unlike Netanyahu, Kahlon has long prepared for this moment. He brings a clear agenda with him, along with a methodical series of demands. On March 26, his people explained that the decision not to attend the negotiations scheduled to begin in the Knesset was a statement of their real objectives: “Kahlon has no plans to be a second [Yair] Lapid in the Finance Ministry. He wants to get the job done, but he also begins with the assumption that Netanyahu will try to interfere. As such, we will not be there until we receive all the necessary tools to allow us to succeed. In order to play it safe, we will ask for everything in writing, just like Netanyahu did with [Prime Minister] Ariel Sharon in 2003, when he was appointed finance minister."

In a Facebook post March 25, Kahlon accused Netanyahu of putting a spin on everything. He hinted at reports originating from the Prime Minister’s Office that it was already agreed between the two parties that the Kulanu chairman would receive the position of finance minister. “No one conducted any negotiations with us, so no one can agree to anything, or even half of anything, in our name,” the Facebook post said.

While he may be Netanyahu’s most natural partner, HaBayit HaYehudi Party Chairman Naftali Bennett also suspects that Netanyahu is acting behind the scenes to leave him out of the coalition by bringing the Zionist Camp in instead. The first call Netanyahu made on the night of his victory was to Bennett, but the people surrounding Bennett report that Netanyahu and his staff have been acting unfairly with Bennett since then. During the campaign, Bennett announced that he would demand the Defense Ministry or Foreign Ministry, but he's starting to realize that Netanyahu is planning to offer him a less senior post, if anything at all. That's why his staff said he would not hesitate to sit in the opposition.

The most important question is whether Bennett’s suspicions about a possible national unity government are correct. As of the morning of March 26, it seems as if his sense of smell hasn’t led him astray. Netanyahu is very concerned, and some say even terrified, of the possibility that he might be forced to face the United States and the world as the head of a right-wing coalition with the ultra-Orthodox.

The Zionist Camp in general and the Labor Party in particular (Zionist Camp being the unification of Labor and Hatnua parties) are beginning to come to grips with the magnitude of their loss. The knives haven’t come out yet, at least not in public, but one can already hear the accusations concerning Herzog’s failed campaign seething beneath the surface. While the head of the party published a belligerent post on Facebook, declaring that he plans to make his party a strong, fighting opposition, he never explicitly said he would not be part of a national unity government.

According to Labor Party senior members, Herzog is indeed considerably interested in joining forces with Netanyahu, since that's the only way that he might be spared, when heads begin to roll in the party in another 14 months, with his position first. However, for that to happen, Labor officials say Herzog must come up with some excuse to join the government — and the excuse, they say, could be Bennett. If Herzog somehow manages to convince the other members of his party that joining the government would prevent the formation of a dangerous right-wing coalition, he might even receive the support of former Labor Party Chairwoman Shelly Yachimovich, who would then receive a senior economic portfolio.

“Even Shelly Yachimovich is fed up with being in the opposition, and would like to be a minister," said one senior Labor Party official, speaking on condition of anonymity. "Now we just have to start putting a story together. Herzog could say that the government is facing a diplomatic and economic emergency, for instance, just like Ehud Barak did in 2009.”