Israeli Prime Minister Benjamin Netanyahu wants to choose the option that allows him to extend his term as long as possible, but has no idea which potential coalition — a rightist one or a partnership with the Zionist Camp — can do that. 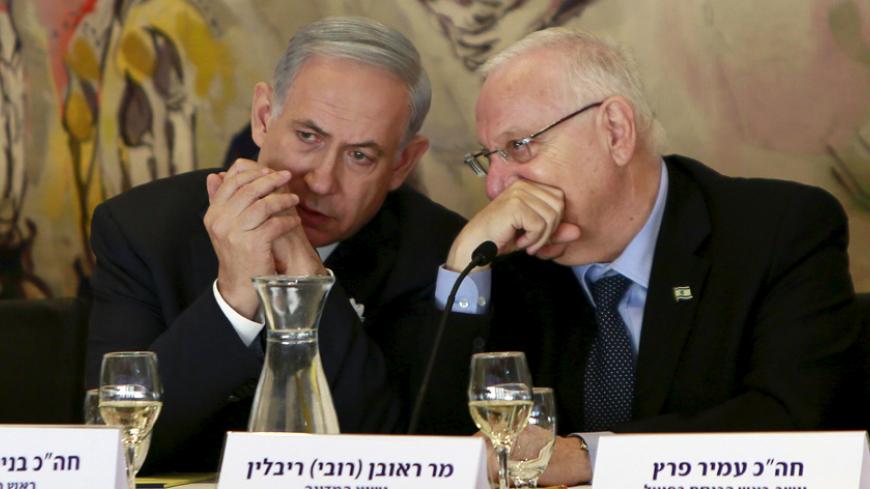 The most decisive moments in the negotiations between Iran and the superpowers caught Israeli Prime Minister Benjamin Netanyahu at the swearing-in ceremony for the 20th Knesset March 31. Netanyahu divided his time between attending official events marking the occasion and receiving classified intelligence reports containing information about the talks’ progress.

Even when it became clear that the talks had reached a dead end this Tuesday, Netanyahu refused to deceive himself. “An agreement will be reached in the end,” his innermost circle said. “The superpowers, headed by the United States, are eager to reach an agreement, so even if the deadline is extended and the final agreements are postponed until later, it will happen in the end,” they said.

Netanyahu, who would have had a great career as a copywriter, used the time to come up with a new catchphrase for what was happening. He refers to the turbulent events of March 2015 as the “Tehran-Lausanne-Yemen axis,” linking Tehran with the Houthi rebels now seizing control of Yemen and the nuclear negotiations in Lausanne. In other words, he made all the UN Security Council superpowers, including the United States, into an integral part of these events, which, he claims, threaten the very future and peace of the free world.

But that wasn’t Netanyahu’s only headache. After he won the March election despite all projections and polls, President Reuven Rivlin tasked him with the formation of the next government. Now he must make the strategic decision of what kind of government he will form. In other words, he must decide on the nature of the government he wants to lead over the next few years. His heart and gut are telling him to form the government he promised, a narrow right-wing/ultra-Orthodox government with a stable majority of 67 Knesset members. Such a coalition would include HaBayit HaYehudi Chair Naftali Bennett, Yisrael Beitenu leader Avigdor Liberman, Kulanu head Moshe Kahlon and the ultra-Orthodox parties. It would allow Netanyahu to implement the ideology he brought with him to the election, and to abandon Israel’s political center, diplomatic pragmatism and apparently, the enlightened world at large.

But Netanyahu is fully aware that there are promises, and there is reality. He is terrified of what awaits him in the international arena, particularly on the US-European front, if he heads a narrow, right-wing government. He knows that for the first time in generations, the public could feel the effects of Israel’s growing isolation in the international arena in its pocketbook, its quality of living and its overall mood. He knows how desperately he needs a political air freshener to help him get his fourth term off to a good start.

Facing him is the leader of the Zionist Camp, Isaac Herzog. Since the elections, he’s been forced to deny rumors that he is eagerly awaiting a phone call from Netanyahu, inviting him to join the government as its official whitewasher. In fact, he’s been denying those rumors on a daily basis. Herzog knows that staying in the political desert that is the opposition could turn him into a lame duck. The Labor Party has a long history of deposing its leaders. It does it almost every time those leaders fail to win back the government. Entering Netanyahu’s government with full force would enable the party to distribute more than a few positions and jobs to its starving members and maintain Herzog’s power.

But like Netanyahu, Herzog is also tied to the commitments he made during the campaign, and to the enormous puddle of bad blood that has accumulated between him and Netanyahu over the past few months. It is as obvious to him as it is to Netanyahu that only extraordinary circumstances will allow the two men to extricate themselves from those commitments somehow, to spit in the faces of most of their voters (the Israeli public has no interest in a national unity government) and to sit together despite everything.

On Netanyahu’s side, everyone is still denying that the prime minister is considering bringing the Zionist Camp into his government. At the same time, there have been a growing number of suspicious indicators over the past few days. Traditionally, the Likud tends to build its coalition by size. Based on that measure, an agreement with Kahlon should have come first, followed by Bennett, and only then with the ultra-Orthodox parties. What actually happened was that Netanyahu first agreed on terms with the two ultra-Orthodox parties, Yahadut HaTorah and Shas. Negotiations with Kahlon are at a standstill because of Kahlon’s demands that he receive an expanded Finance Ministry with certain authority and power that would otherwise be given to other ministries, saying that this is how he could resolve Israel’s housing crisis. Meanwhile, the Likud is hanging Bennett out to dry for the moment under false pretenses.

“If they were serious, they would have made us an offer long ago,” a senior member of Bennett’s party told Al-Monitor March 31. “We are worried that they want to keep us out, so as to leave space for Herzog.” Negotiations with Liberman seem to be stuck for the same reasons. Netanyahu is taking his sweet time, and apparently, he knows exactly why.

The inner struggle being fought in Netanyahu’s soul is certainly not an easy one. During the last elections he proved to himself that he is dependent on settlers and the rest of his political base, voters identified with the ideological right. Only his sharp turn to the right over the past few days, trampling Bennett, Liberman, Eli Yishai and Kahlon along the way, allowed him to soar from 20 to 30 seats in just a few days in an incredible political campaign. If he turns again now, leaving the ideological right out of the government by shifting to the center, there is a chance that he will lose the steadfast support of his conservative voters forever. It is doubtful whether Netanyahu has the constitution to do a thing like that.

Netanyahu’s behavior during the campaign made his mood perfectly clear. He burned bridges to the center and the left, made harsh statements, assaulted the democratic fabric of Israel, insulted the Arab minority (apologizing immediately after) and made it clear that he had returned to the ideology in which he was raised since childhood in his father’s home.

After all that, another political zigzag — no less reckless than the previous one, but this time to the political center — will lose Netanyahu any trust his supporters might still have in what he says.

Meanwhile, in the Zionist Camp, things are only a tad less complicated. Even if Herzog wants to join the government, he will still have to overcome quite a few obstacles. Knesset member Amir Peretz is one of them. So is Herzog’s confidant and right-hand man, Knesset member Eitan Cabel, who has been fairly outspoken in his opposition to joining Netanyahu’s coalition. Former Labor Chair Shelly Yachimovich, the most powerful female Knesset member in the party, also opposes joining the new government, but she will change her mind if the Zionist Camp is invited to join in some format that would make it an almost equal partner in governance, rather than simply an add-on brought in as an afterthought to offer the government an additional margin.

Apart from them, there are quite a few senior members of the Zionist Camp secretly interested in getting closer to the centers of power. Almost four years in the political wilderness have left the members of the Labor Party starved and frustrated. Now that they have increased their strength to 24 seats, a whiff of power seems to be driving them out of their minds. They are circling Herzog like characters in an old Western, glaring into each other’s eyes, with their hands ready on their pistols. Who will draw first? So far, none of them seem to have the audacity, at least for now.

Netanyahu’s decision in the next few weeks will determine the face of Israel over the coming years. It may even determine what the entire region looks like. A narrow government will make it difficult for Israel to continue leading the axis of moderate states currently applying pressure to the international community against a nuclear deal with Iran. Israel will grow increasingly isolated, and its relationship with the administration of US President Barack Obama will continue to deteriorate. This, in turn, will exacerbate tensions with the Palestinians and heat up the fronts where Israel is already facing trouble.

The formation of a joint government with the Zionist Camp could serve as a catalyst, changing these assessments in a real and meaningful way. It could burst through the international siege on Israel and allow it to strengthen its alliances with the moderate Sunni states. Herzog will assume responsibility for healing the deep rift in Israel’s relationship with Obama and serve as honorary ambassador to Europe.

The decision facing Netanyahu is the most important one he will make in the final part of his political career. Though he wants his decision to extend that career for as long as possible, at this point he has no idea which of the two options will offer him the goods. He actually won his fourth term because of his extreme behavior, which culminated in breaking all the rules of the game right in front of the international community. Then again, in the chaotic Middle East, the right choice is anyone’s guess.