Netanyahu looks for way out of rightist coalition

Prime Minister Benjamin Netanyahu needs a diplomatic process with the Palestinians to appease the international community, but the parties with which he is negotiating a coalition government are not challenging him on this issue. 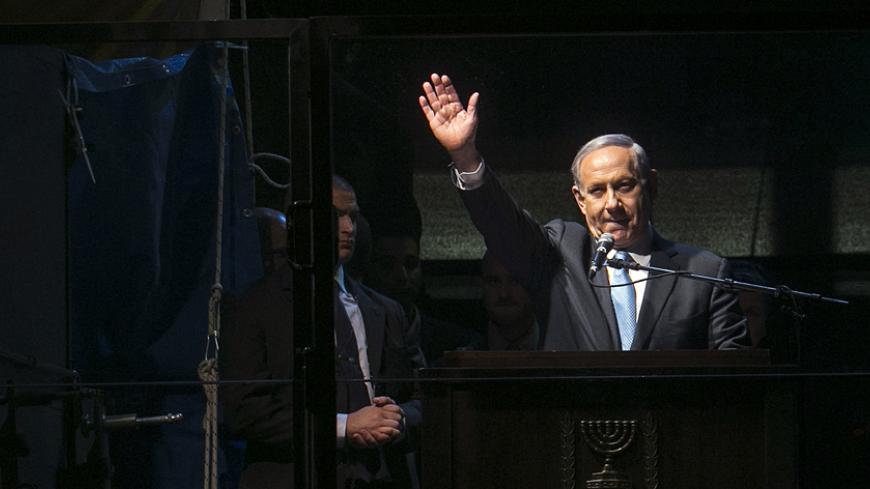 Prime Minister Benjamin Netanyahu has often, including in recent days, spoken with longing of his second government, established in 2009 in partnership with his ultra-Orthodox allies and the Labor Party headed by former Prime Minister Ehud Barak. It was a fairly stable government that saw out almost four years of its term, during which it enjoyed international support by dint of the close ties between Barak and the US administration and the expectations generated by Netanyahu’s 2009 Bar Ilan speech. As long as Barak served in the government, the diplomatic stalemate of Netanyahu’s second government was considered bearable and something that could be contained.

The guidelines of that government expressed a commitment to restart negotiations with the Palestinians, including Barak’s demand that the government work to advance the Middle East peace process within the framework of a regional peace conference. This demand helped Barak obtain the approval of his party’s institutions for joining the Netanyahu government. Labor’s accession to the government put an end to the direct and indirect contacts for entering the coalition Netanyahu was conducting with then-chairwoman of the Kadima Party, Tzipi Livni, whose party had gotten 28 Knesset seats in the elections. In talks held at the time, the parties spoke extensively of negotiations with the Palestinians, which at that point had gotten to a very advanced stage between Palestinian President Mahmoud Abbas and outgoing Prime Minister Ehud Olmert.

The makeup of the coalition that he formed with Barak could not have been better as far as Netanyahu was concerned: It created a false impression of a desire to move the diplomatic process forward through the Labor Party and gained him relative calm on the international front. In fact, Netanyahu did not advance the process, but rather he put it on hold, something that won him relative calm from the settlers and the extreme right wing of the Likud. A truly magic formula.

After the 2013 elections, Netanyahu resorted to the same formula. The first coalition agreement was signed with Livni, who by then was heading a new party called Hatnua, which ran on a diplomatic process ticket. Livni was determined to join the government and not to revert to her frustrating time in the opposition, and was quick to clinch a deal. Netanyahu promised that he would be committed to the diplomatic process and Livni was put in charge of the negotiations with the Palestinians and tasked with reaching an agreement ending the conflict. But this time, too, Netanyahu had no intention of pushing the negotiations forward.

Netanyahu did, in fact, have a broad-based government with a diplomatic agenda in the spirit of two states for two people; Livni, who was also appointed justice minister, traveled the world and met with Palestinian negotiator Saeb Erekat. Netanyahu, on the other hand, through his special envoy to the talks, attorney Yitzhak Molcho, made sure that nothing concrete would emerge from the closed-door meetings. As far as he was concerned, the illusion of negotiations had an important role vis-a-vis the United States.

Netanyahu is now facing a new reality. On the one hand, he won the elections and strengthened the Likud, bringing it 30 Knesset seats. On the other hand, the emerging coalition is composed of right-wing and ultra-Orthodox parties, at a time when relations with the United States are sliding uncontrollably down a slippery slope.

It has often been said of Netanyahu that he is the sum of all his fears. In this case, Netanyahu truly fears a narrow coalition government. According to a political source who spoke with him in recent days, Netanyahu sounded somewhere between troubled and scared of a government with Yisrael Beitenu leader Avigdor Liberman and HaBayit HaYehudi Chair Naftali Bennett. In a conversation with Al-Monitor the source said, on condition of anonymity, “Netanyahu said that the relationship with the United States is so tense, that he thinks such a government will not be accepted there and in the world, in general, and will thus hurt us. He said several times that things were complicated. I understood from him that he was looking for a moderating element, for instance the Zionist Camp, in the coalition. My sense was that he was praying now that in the framework of the coalition negotiations, someone would demand conducting a diplomatic process with the Palestinians.”

This description is in keeping with Netanyahu’s patterns in forming his last two governments. As mentioned, at the time, he acceded to the demands of his coalition partners (Barak in 2009 and Livni in 2013) and pledged to advance diplomatic negotiations, even though in actuality he truly did not consider them a goal or an agenda. As far as Netanyahu is concerned, the very existence of negotiations with the Palestinians is designed to gain him a free pass with the international community and to stave off pressure.

But there are two substantial differences this time. First, the United States, as reflected in recent days in the clear statements by President Barack Obama, no longer buys into this game — Obama believes that Netanyahu is not interested in two states, just as he declared in his election campaign. Second, there is no fig leaf available within the Israeli political arena.

In the coalition talks that got under way officially on March 26, the diplomatic issue never even came up. All the parties negotiating with the Likud (Bennett, Liberman and the ultra-Orthodox) are firmly entrenched on the political right, except for Moshe Kahlon’s relatively moderate Kulanu Party, which does not concern itself at all with a diplomatic agenda and all its demands are mainly in the social-economic realm.

To Netanyahu’s chagrin, there is no one in the political arena to challenge him on the diplomatic issue and make him look in the eyes of the world as someone making painful concessions to himself and his Likud Party. That is why Netanyahu will keep up his efforts to enlist the Zionist Camp to his government at a more advanced stage of the coalition negotiations, not just as a threat he can wave at his partners on the right to soften their demands, but also, and mostly, because he himself fears the prospects of heading a narrow right-wing government.

This will be a major test for the Zionist Camp and its leader Isaac Herzog — whether to go the way of Barak by joining the Netanyahu government, or to remain loyal to the will of his constituents and stay in the opposition.

Meretz Party Chairwoman Zehava Gal-On predicted during the election campaign that Herzog would join a Netanyahu government. This week she reiterated her claim, telling Al-Monitor, “Herzog says now that they will not join the government, but I'm not at all sure. I worry that what was will be, and that Netanyahu will find his current fig leaf.”