How rumors hurt the Palestinian cause 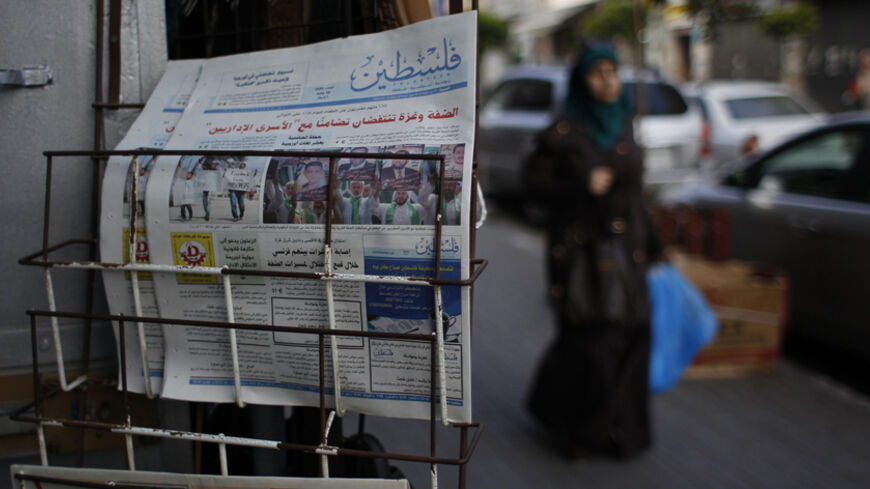 A Palestinian woman walks past copies of Palestine, a pro-Hamas newspaper, displayed outside a shop in the West Bank city of Ramallah, May 10, 2014. - REUTERS/Mohamad Torokman

Reports in the Palestinian media about Israel’s scheming and plotting in Jerusalem give the idea that every Israeli, young and old, settler and leftist, is busy conspiring to blow up the Al-Aqsa Mosque and wipe out all the Arabs in the city. On the other side, the Israeli media sends the message that every Palestinian driver is a potential vehicular terrorist until proven otherwise. Rumors become headlines and unconfirmed suspicions are translated into “facts.” All is fair in the propaganda war, the race for victimization and the incitement contest.

The Palestinian media coverage of the Nov. 18 terrorist attack at the synagogue in Jerusalem’s Har Nof neighborhood has provided more fuel for the fire that threatens to burn every corner of Jerusalem and spread throughout the region.

In his Nov. 18 piece for Al-Monitor, Ahmad Melhem relied on a report published in Quds News, according to which "an act was carried out in one of the synagogues in western Jerusalem, which caused the killing of four settlers and the deaths of two Palestinian martyrs. This, after settlers killed a Palestinian man they kidnapped in East Jerusalem on the previous day. This was retribution which all the Palestinian factions blessed and described as a natural reaction to the Israeli provocations against the holy places and against the Palestinian residents of Jerusalem.” The terminology is worth noting: “An act was carried out” and not “a terror attack,” “killing” and not “murder,” as though the events in question were a traffic accident. The residents of a western Jerusalem neighborhood are termed “settlers.”

There you have it, the settlers would say to the Israeli leftists: In the eyes of your partners, you, too, denizens of West Jerusalem and Tel Aviv, are settlers. The cat is out of the bag, we are all interlopers in their view. Jews are not part and parcel of this land.

What should a Palestinian youth from East Jerusalem think when reading the report about the “death of two martyrs” described as a pair of heroes who sacrificed their lives for God, even though they murdered four people armed with prayer books and a Druze policeman who came to their defense? He may perhaps think that it’s time to equip himself with a kitchen knife and go looking for “settlers” in the nearby synagogue, so that afterward the media will describe him, too, as a martyr who gave his life for Al-Aqsa.

And who determined, as written in the report, that settlers kidnapped and killed a Palestinian man? A forensic exam by the Israeli police pathologist into the Nov. 16 death of Yousef Hassan Ramouni, an Arab, in the presence of a Palestinian pathologist retained by the family, showed that Ramouni took his own life. The circumstances of his death do, indeed, raise doubts, and the cruel murder of the youth Mohammed Abu Khdeir on July 2 proves that Jews, too, are not averse to murder to satisfy a sick desire for revenge. And yet, even if the reporter decided to ignore the forensic evidence, who says settlers kidnapped and killed Ramouni? Perhaps the murderers were from Haifa, maybe Arab debt collectors or a suspicious husband?

Let’s set aside for the time being journalistic ethics, which require the writer to present the versions of all sides involved. Ignore for a minute the wholesale accusations against a large Jewish public. Spreading unfounded slander harms, first and foremost, the Palestinian interest in gaining the trust of the Israeli public. Identification with the murders of the elderly, of women and children, pushes more and more Israelis into the arms of the right, which does not recognize the existence of a Palestinian people. Glorification of terrorism by the media, condolences from President Mahmoud Abbas to the family of a terrorist and celebrations in which candy is handed out are tantamount to a hail of bullets fired into the brittle legs that support the Palestinian campaign against the occupation and for recognition of a state of their own.

Blowing up the declarations of junior Israeli politicians regarding alleged intentions to change the status quo on the Temple Mount was a joint effort by the Palestinian media and leadership. This is not the first time these two entities have joined forces to gain the sympathy of the Israeli and international public.

During Operation Defensive Shield in April 2002, an associate of Abbas called to remonstrate with me for refusing to publish a “report” about the “massacre” in Jenin, in which, he said, 500 Palestinians were buried under the rubble of the houses blown up by the Israeli military. I told him then that if the Palestinians kept spreading the exaggerated report, people wouldn’t even believe that 50 people died in Jenin. A UN report issued in August of that year determined that 52 Palestinians were killed in the battles in the refugee camp, half of them civilians, and rejected claims of a massacre.

The reality in Jerusalem, the West Bank and Gaza is harsh and cruel. Land expropriation, administrative detention, violation of mosques and the burning of fields speak for themselves and against the occupation. Transparent propaganda plays into the hands of those seeking to blur this reality and to undermine the credibility of the Palestinian media and of Israeli and international human rights organizations that go to great pains to improve the lot of the occupied population.

And when all is said and done, one must remember that the Palestinian media is an integral part of a society fighting for its freedom and honor. In the 1940s, the Israeli media was harnessed to the Zionist struggle against the Arab world. It, too, spread hatred and fed stereotypes to its readers. Today, the Israeli and Palestinian media must adopt a common language — one cleansed of lies and incitement. Journalists on both sides must expose the irresponsible politicians and clerics whose deeds do nothing to further democracy, freedom, equality and freedom of expression.