This morning's terror attack on a synagogue in Jerusalem indicates that the latest measures of lifting age restrictions for Muslim prayers at the Temple Mount failed at preventing further escalation. 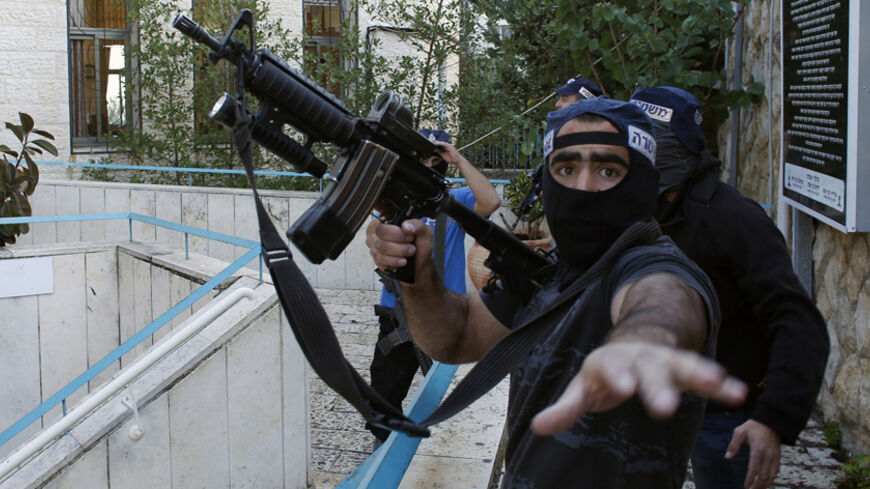 An Israeli police officer gestures as he holds a weapon near the scene of an attack at a Jerusalem synagogue, Nov. 18, 2014.

Even in Israel, where people are accustomed to harsh scenes and scenarios, it was an unusually horrific incident. On the morning of Nov. 18, a synagogue in the heart of the Israeli capital city looked like a slaughterhouse. “For a moment I thought that Islamic State [IS] had found its way here,” said one of the stunned eyewitnesses.

The Kehillat Yaakov synagogue, in the center of Jerusalem’s Har Nof neighborhood, was drenched in blood. Slain worshippers were scattered about in large pools of blood. Worshippers who had been wounded in various degrees of severity were also scattered on the floor, moaning in pain. Two Jerusalem paramedics arrived quickly at the scene even before the security forces and started to treat the wounded. But when they, too, were attacked by two Palestinian terrorists who shot at them, the paramedics fled. Shouts of “Allahu Akbar” were heard from inside the synagogue.

The attack lasted less than half an hour. By the end of it, the two terrorists, cousins from the East Jerusalem Jabel Mukaber village, lay dead. Surrounding them were also the bodies of four Jewish worshippers, including the head of a Jerusalem rabbinical college, Rabbi Moshe Twersky. An Israeli policeman was in critical condition, another policeman was moderately wounded and additional worshippers suffered very severe wounds. Three out of the four murdered Israelis were also American citizens. The fourth was born in Great Britain. The attack left 24 sons and daughters fatherless.

The sun returned to Jerusalem on Tuesday morning after two rainy days. The air was clear and cold, as is customary for Jerusalem fall weather. A thin layer of optimism covered Jerusalem. Violent events were in decline, even the tension surrounding the Temple Mount began to abate following Prime Minister Benjamin Netanyahu’s visit to Amman on Nov. 13. It seemed as if the evil winds that blew throughout the entire region in recent months had started to die down. Yehuda Glick, one of the Jewish activists for freedom of worship on the Temple Mount, who had been shot by a Palestinian assassin two weeks earlier, on Oct. 29, had recuperated enough to give his first interview from the hospital, the evening before. And then, a little bit before 7 a.m., madness returned to wreak havoc.

Rassan, 27, and Uday Abu Jamal, 22, cousins from Jabel Mukaber, are the Palestinians who committed the massacre. Jabel Mukaber, in East Jerusalem, is a Palestinian neighborhood. As opposed to residents of the West Bank, Jabel Mukaber’s residents enjoy the rights of Israeli citizens, including national insurance payments, the right to vote in Jerusalem’s municipal elections and blue (Israeli) identity cards. One of the two murderers recently worked in a grocery shop near the synagogue. “They knew exactly where they were headed,” I was told during the day by an Israeli security source in Jerusalem. “They went to a synagogue in a neighborhood in the western section of the city, far from the crowds and tumult, because they knew that there was no protection here and murder would be easier here. To our great sorrow, they were right.”

A day earlier, I had conversed with Internal Security Minister Yitzhak Aharonovitz, in the Knesset building in Jerusalem. Aharonovitz told me about the efforts to lower the level of tension. After long weeks during which Muslim prayer on the Temple Mount was restricted to adults over the age of 50, the minister decided to gradually ease up on the restrictions. “I instructed the police to lower the cut-off age to 45,” the minister said, “and afterward, to remove the restriction completely. They were not happy about that in the Shin Bet, but it worked. The weekend was relatively quiet, the Mount was calm, and it seemed to me that we were getting back on track.”

But Aharonovitz’s prophecy was premature. The carnage in the synagogue turned the clock back several rounds in the whole region. To the Israelis, it evoked memories of the horrific attack on the Merkaz Harav rabbinical college on March 6, 2008, in which a Palestinian terrorist shot and murdered eight college students. Following the attack today, Netanyahu announced that Israel will “respond with a heavy hand” against the perpetrators and those responsible for it. But Netanyahu’s statement is purely symbolic and lacking any operational value. In cases like these, there is no enemy player for Israel to target. In cases like this, there is no leadership, no planning, no institutionalized and organized intifada, in short, no “terror infrastructure.” What we do see are localized and improvised attacks of raging Palestinians, brainwashed and full of hatred. The fuel that feeds this machine is the tension surrounding the Temple Mount, and raging Palestinian incitement. Under such circumstances, options for an appropriate response are limited.

“It is the Temple Mount that drives the wheels of these kinds of events,” said a high-level Israeli security official in Jerusalem. “The discourse on the Temple Mount has hijacked the public discourse and the overall atmosphere.” He said, “The Palestinian Authority also has a share in this incitement and President Mahmoud Abbas is trying to play a double game. With one hand he condemns terror and thwarts it in the West Bank territories; with the other hand he cries out to ‘defend the Temple Mount with every possible means,’ thus becoming part of the incitement.” This argument is true. The Palestinian media does not pass up an opportunity to pour fuel on Jerusalem’s glowing embers. For example, on Nov. 16, a Palestinian bus driver — Hassan Yousef Ramoni — was found dead, hanging from a cord in the center of his bus in Jerusalem. The Palestinian media immediately called for revenge. According to the Palestinians, Ramoni was eliminated. But the investigation came to totally different conclusions, as did the forensic pathology results. No signs of violence were found, no evidence was found of a criminal event. Ramoni committed suicide, but the facts were not able to change the Palestinian narrative. Hamas celebrates incidents like this, that’s clear. The problem is that Abbas can’t allow himself to stay behind either. He, too, has to placate his electorate. Thus, the flames intensify, each time anew. It is altogether possible that the Abu Jamal cousins from Jabel Mukaber invaded the synagogue to avenge the death of an Arab bus driver — one who actually committed suicide. These are the chronicles of Jerusalem insanity foretold.

A short while after the attack, Shin Bet chief Yoarm Cohen arrived at a meeting of the Foreign and Security Affairs Knesset Committee, scheduled beforehand. Surprisingly, Cohen confirmed the spirit of what was published here last week, citing a security source who said that Abbas does not encourage terror, not openly and not under the table. These statements are perceived as contradicting what Netanyahu, Defense Minister Moshe Ya'alon and the rest of the right-wing leadership are saying, accusing Abbas of the incitement that brought about the attack.

“We are no longer looking at random incidents by isolated individuals,” said a high-placed Jerusalem police source. “Because these cousins planned the massacre, got hold of a gun, collected intelligence information, knew exactly where they were going and at exactly what time,” said the source. “On the other hand, this act cannot be attributed to an institutionalized terror organization, to training or infrastructure. These are ‘atmosphere’ attacks, local attacks committed by local people influenced by the general atmosphere, by state of mind.”

Tuesday morning was a time of great misfortune in Jerusalem. Knesset members and ministers on the right of the political map in Tel Aviv immediately began to disseminate combative declarations. Netanyahu convened a security consultation. US Secretary of State John Kerry demanded that Abbas condemn the event and within minutes, the Palestinian Chairman Bureau released a weak reproof. Later during the day, Kerry personally called Abbas, demanding that he condemn the attack. In reaction, and following the weak reproof published by his office, Abbas spoke in his own voice, severely condemning the killing of the worshippers at the Jerusalem synagogue.

So, what do we do now? Unfortunately, there is not even a “diplomatic process” that we can try to renew. The mutual antipathy between Abbas and Netanyahu breaks records every day. Netanyahu smells elections in the air, his coalition is running aground, the Israeli public is turning right wing in the wake of the violence and there is no “responsible adult” on the scene. With regard to Abbas, it’s all the same, only a bit worse than before. A hot winter awaits us.