The truth about 'united' Jerusalem

Israeli center-left politicians are still forced to defend themselves from accusations of wanting to split Jerusalem, even though the Palestinian neighborhoods in question could be separated from the city without hurting the state. 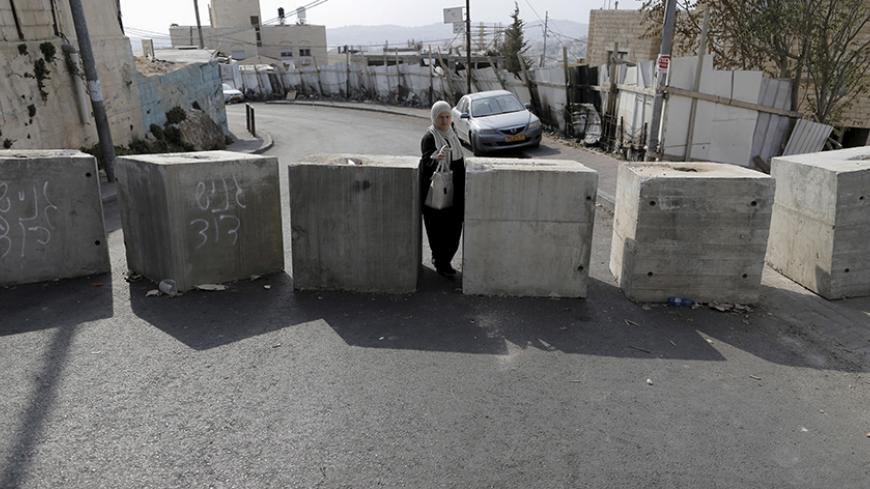 A woman passes through concrete blocks that were placed by Israeli police last week in the East Jerusalem neighborhood of Jabel Mukaber, Oct. 19, 2015. - REUTERS/Ammar Awad

The slogan of a “united Jerusalem” is one of Israeli politicians' favorite electoral clichés. But while it can be understood when coming from right-wingers, it becomes confusing when it is repeated by center-left leaders, who want to prove that they are no less Jewish and patriotic. Thus they, too, collude with one of the great falsehoods that politicians and others have been telling the Israeli public for many years.

Zionist Camp leader Isaac Herzog and Yesh Atid Chairman Yair Lapid, both of whom actively avoid the left-wing label, distance themselves from concretely dealing with the future of Jerusalem in a peace settlement between Israel and the Palestinians. They make speeches about the two-state vision, but at the same time repeatedly recite the false mantra about a united Jerusalem. They are trapped in a right-wing Catch 22 and left unable to courageously explain to the public that detaching from the fringe Arab neighborhoods in East Jerusalem is not equivalent to “dividing the city.”

It seems that ever since Prime Minister Benjamin Netanyahu coined his winning election slogan “Peres will divide Jerusalem” in 1996, center-left leaders in Israel feel that they have to apologize for and justify something that never was on the agenda to begin with. Former President Shimon Peres never intended to divide Jerusalem, and in the Oslo Accord the issue of Jerusalem was set aside for the future. It was only a brilliant election slogan invented by campaign strategist Arthur Finkelstein, aimed at the soft underbelly of the religious right.

As a result of that successful campaign, the expression “dividing Jerusalem” holds negative associations in the Jewish public. Partitioning the city is viewed as a willingness to dismember the capital into two equal parts and concede the State of Israel’s most important national and religious symbols. But that is not the case. Even in the negotiations during Prime Minister Ehud Olmert's era, there was no intention of dismembering the city into two, but only to disengage from the Arab neighborhoods on its margins. Over the years, and on the heels of the first and second intifadas, these neighborhoods became closed, volatile sites, to the extent that today it is questionable what connection these areas have to Jerusalem at all.

In recent years, quite a number of brutal terror attacks were executed by residents of East Jerusalem. For example, the March 2008 murder of eight yeshiva students at the Mercaz Harav rabbinical college in Jerusalem and the November 2014 murder of four worshippers in a synagogue in Jerusalem’s Har Nof neighborhood were carried out by terrorists from the Jerusalem Jabel Mukaber neighborhood.

The only party whose leaders spoke then about separation from the fringe Arab neighborhoods was Kadima, a centrist party founded by Prime Minister Ariel Sharon after the 2005 disengagement from the Gaza Strip. Sharon’s political successor, Olmert, led a process of advanced negotiations with the Palestinians. The Olmert-Abbas talks were based on the Clinton Parameters and included disconnection from the Arab neighborhoods.

But it was Deputy Prime Minister Haim Ramon who gave well-reasoned arguments for viewing the separation from fringe neighborhoods as a positive step from the perspective of the Zionist agenda. In August 2008, after the terror attack in the Mercaz Harav yeshiva and another two vehicular assaults carried out in the heart of Jerusalem by residents of the eastern neighborhoods, Ramon said, “Whoever thinks that the problem of Jerusalem and terror is localized and that the destruction of one house or another will alleviate the difficulty is burying his head in the sand. The key question is: Does the government want Jabel Mukaber and Tsur Baher to be part of the State of Israel or not? It is in the interests of the State of Israel to get rid of these villages and neighborhoods, which were never Jerusalem and threaten the very essence of the Israeli capital as a Jewish, Zionist city.”

Ramon’s words created quite a stir for several days, but they never matured into a real, incisive public discourse. Kadima lost the 2009 elections and the Likud under Netanyahu rose to power. Ramon and Olmert left politics, each for his own reasons. All this is why Lapid and Herzog are following Netanyahu’s lead and adopting right-wing rhetoric regarding security and the Jerusalem issue in their attempts to draw closer to the religious, even ultra-Orthodox, publics.

Instead of telling the public the truth about Jerusalem, instead of trying to convince it that in order to maintain a Jewish majority in Jerusalem and minimize friction and terror, we should separate from the Arab neighborhoods, they capitulate to right-wing rhetoric.

They don’t tell the public that Jabel Mukaber, Tsur Baher, Issawiya, Shuafat, Beit Hanina and Beit Safafa are Arab neighborhoods and villages that were annexed to Jerusalem’s municipal borders in 1967 and were never an integral part of the city. They don’t tell the public about the economic price, such as the expenses to the state's social security budget, the State of Israel pays to a hostile population that has no connection to the state.

They don’t tell the public that ever since 1967, the Arab population in Jerusalem has been growing at a faster pace than the Jewish population. And since the residents of East Jerusalem have the right to vote in elections for local authorities, it could one day come to pass that an Arab mayor is elected in Jerusalem.

Instead of explaining to the public that they are not talking about conceding Jerusalem or partitioning it, center-left leaders are busy apologizing. The one who understands the issue in question is Yisrael Beitenu Chair Avigdor Liberman. His plans for territorial swaps also included the Arab neighborhoods in East Jerusalem. But meanwhile, he, too, has gotten caught in the trap of "dividing the city."

Unfortunately, a successful election slogan has turned left-wing leaders into perpetual suspects of conspiring to divide Jerusalem. Thus, trapped in their defensive position, they try to prove that the charges against them have no basis. But in this they do themselves wrong, and deprive the public of a discourse that should have taken place a long time ago. Apparently, such a discussion will have to wait for a time in which East Jerusalem-inspired terror rises to such levels that we will have no choice, just like before the 2000 withdrawal from Lebanon and the 2005 disengagement from the Gaza Strip.