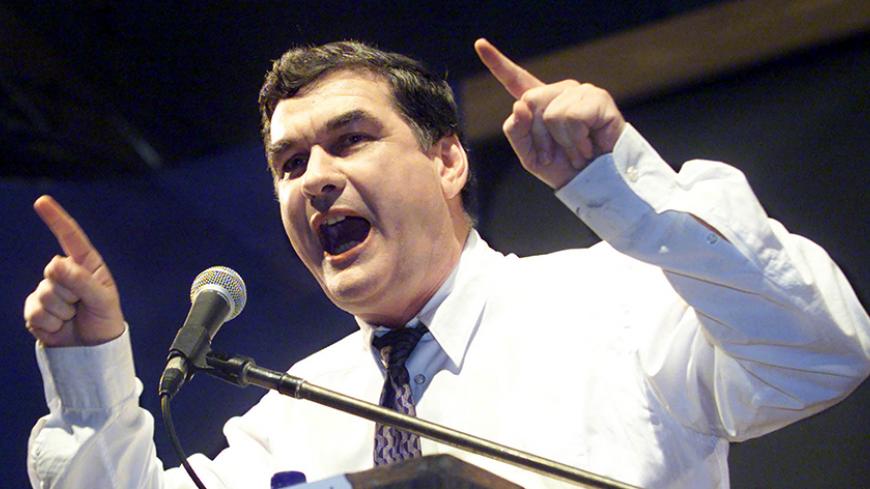 Former Minister Haim Ramon, the former chairman of the National Labor Union and a senior member of the Labor Party, was the sponsor and founder of the movement Save Jewish Jerusalem. In recent months, he spun ties with left and centrist activists, convincing them to join his initiative to prevent an Arab majority within the boundaries of Jerusalem by breaking away from the Palestinians neighborhoods of East Jerusalem.

It remains unclear whether Ramon’s initiative aims at paving his way back into politics, although some of the movement’s members allege that in recent months that has been the only thing on his mind. Al-Monitor discovered that this situation — together with a hatred-inciting video clip that was published on the movement's behalf — generated a wave of senior movement members quitting the initiative only six months after it was established.

The movement’s key argument has been that unless Israel acts swiftly, its capital city will soon have a majority of Arab voters, mostly from East Jerusalem, who will be able to alter the city’s political balance. As Israeli residents, East Jerusalem Arabs can vote in the municipal elections; if they all come together, an Arab mayor could very well be elected.

In the recent 2013 municipal elections, only 0.7% of Jerusalem’s Arab residents took part in the elections. This small figure has not stopped the members of Save Jewish Jerusalem from contending that the Arab residents might use this democratic tool — to wit, the elections — to take over the city politically.

Ramon also managed to mobilize the Peace and Security Association, whose members include retired senior officers from the Israel Defense Forces. By getting their support for the plan, which calls for the partition of Jerusalem, the initiative got the much-needed security public stamp of approval. Among other things, the plan consists of pulling out of Arab neighborhoods such as Jabel Mukaber, Sur Baher, Issawiya and Shuafat.

Shaul Arieli, a retired colonel, a member of the Peace and Security Association and a sponsor of the Geneva Peace Initiative, drafted the plan's underlying principles. According to the movement’s initiative, Israel must take a unilateral step and let the Palestinian Authority (PA) assume control over East Jerusalem’s 28 Palestinian neighborhoods. The latter will be declared Area B, which means — as defined in the 1993 Oslo Accord — that Israel will oversee security matters while the PA will be responsible for civilian affairs. What this implies is that the 200,000 residents in those areas will have their Israeli residency revoked. According to the plan, once this stage is complete, a wall will be built around those areas.

In an article Arieli published June 4 on the occasion of Jerusalem Day, he explained that the 1967 decision to expand the city’s municipal boundaries had been implemented hastily and without forethought and careful planning.

The movement’s plan drew scathing criticism from right- and left-wing members, as well as from Palestinians and experts on Jerusalem. Their main contention was that the plan was unfeasible and could potentially increase the number of violent clashes in the city. Ramon’s reaction to this criticism was that “the right is opposed to the plan because it believes in the Greater Jerusalem. The left is opposed because it cares about the Palestinians. We, on the other hand, will do what’s good for Israel.”

In recent days, the movement has seen significant internal schisms. Some of its members who, as noted, consist of former senior defense establishment officials were surprised by its initial moves that were carried out on their behalf. The movement has recently posted billboards and published a video clip that left some members dumbstruck. Calling the clip racist and inflammatory, they say it contradicts their values and worldview as well as that of other members who have joined the initiative.

One of the movement’s members, a senior former defense official who told Al-Monitor on condition of anonymity that he feels cheated, said, “I was asked to join the initiative and I expressed my support of the idea. And then they pursued a direction I cannot be a part of.” According to him, he and other members have asked to remove their names from its list of supporters and have notified Ramon about that.

The fear-mongering clip that Ramon’s movement disseminated leaves nothing to the imagination. Armed with knives, rifles and hand grenades, a group of Palestinians, some hooded, decide to conquer Jerusalem from the Jews. After looking into different methods of operation such as intifadas, blowing up buses or terrorism using knives, they decide to rally the Arab majority in the city to elect an Arab mayor. At the end of the clip, Jerusalem falls into Palestinian hands and a narrator says in Arabic, “We have Al-Quds” ("Jerusalem" in Arabic).

Al-Monitor approached some of the movement’s founders to get their responses to the video clip. They all replied, “No comment.” Others asked for time to think about it and to react after protesting to Ramon.

“It destroys everything that’s been built for years and every notion we had about [Israeli] leftists,” Hani Issawi, a resident of Issawiya, told Al-Monitor after watching the video clip. “If they, too, fall into this abyss and join the rampant racism, then the problem runs much deeper than we thought it did.”

According to him, the residents of East Jerusalem are reluctant to stay in a Jerusalem under Israeli rule, preferring indeed to live under the PA. However, Ramon’s plan is misguided because it champions disengagement and separation in order to keep Jerusalem strictly Jewish instead of trying to make peace between the two populations.

“The tools they’re using to promote their plan are seriously wrong. These are people who always championed peace. And even if we haven’t reached peace, at least we thought they supported co-existence,” Issawi added. According to him, he was mainly disappointed with Ayalon who, together with Sari Nusseibeh, took part in the 2002 People’s Voice peace plan. The next few days will determine whether Save Jewish Jerusalem will disappear only six months after its kickoff.