While Israeli conservatives sanctify a united Jerusalem, many of them also support walling off some Palestinian neighborhoods that were annexed in 1967. 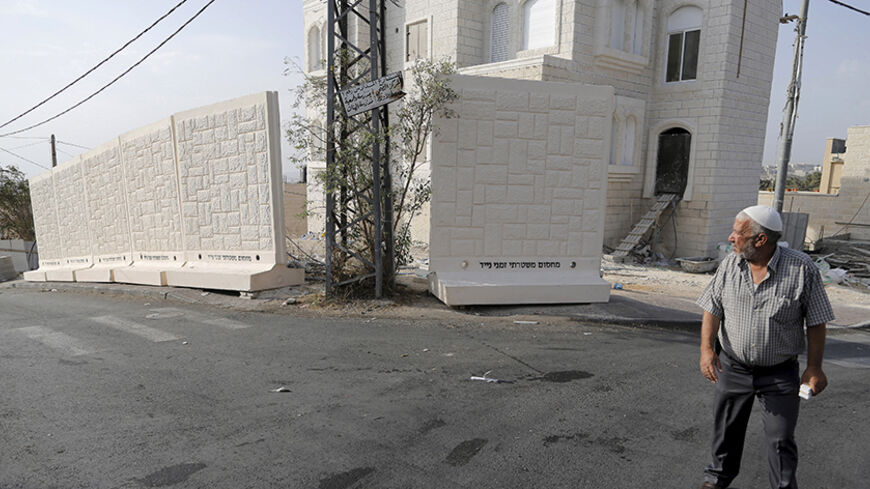 The "knife intifada" ratcheted up a few notches Oct. 18 and metamorphosed. Until now, the incidents were characterized as "lone wolf" attacks in which the perpetrator targets bystanders and attempts to harm as many people as he can before he is neutralized or killed. But a turnabout occurred Oct. 18 involving real firearms and an Israeli Bedouin terrorist, and the accidental lynching of an illegal Eritrean worker who was mistaken for another terrorist.

Security cameras that filmed the chaotic scene in the Beersheba central bus station captured the terror, panic and pandemonium caused by an isolated terrorist armed with a handgun. At 7:30 p.m., the terrorist burst into one of the bus platforms, shot and killed a Golani Brigade soldier and snatched his gun. He succeeded in wounding several more civilians and soldiers until he was killed by police.

After a short time, it emerged that the terrorist was not Palestinian, nor even an East Jerusalemite. He is, instead, an Israeli citizen, with all its implications; a Bedouin-Israeli from the town of Hura in the Negev. This intifada surprises us each day anew; sometimes it seems to surprise itself, too. No one has control; it's guided by raging impulses and exposed nerves.

But the main hub of the intifada and the epicenter of the violence was and remains Jerusalem. On Oct. 18, the police started construction of a concrete separation wall, 2½ meters (8.2 feet) tall, between the Jewish Armon Hanatziv neighborhood and the Palestinian neighborhood of Jabel Mukaber. The wall was erected after Palestinian rioters turned the Jewish neighborhood into a target for Molotov cocktails and stones. The wall was supposed to disconnect Jabel Mukaber, considered the most violent of the Palestinian neighborhoods and the one that spawned a large percentage of the terrorists, from the Jewish sections of the city. But the move also has symbolic significance. The trademark of the Israeli right, principally of Prime Minister Benjamin Netanyahu, is a “united” Jerusalem.

Netanyahu was first elected to the premiership in 1996, using the slogan, “[President Shimon] Peres will split Jerusalem.” Now he erects a wall in the heart of the city, dissects Jerusalem and separates Palestinian areas in the east from Jewish areas in the west with various obstructions such as police barriers, cement blocks and fences. Netanyahu is partitioning Jerusalem.

In the security-diplomatic Cabinet meeting held Oct. 18, Netanyahu encountered furious reactions from the right-wing ministers. Minister Yisrael Katz (a member of Netanyahu’s own Likud) reportedly said that the placement of the wall is akin to giving “a prize for terror.” Other ministers such as Naftali Bennett and Zeev Elkin argued that it creates the impression of dividing Jerusalem. Netanyahu, who has a very tender place in his heart for Jerusalem, subsequently decided to freeze the wall idea and instead “investigate alternative solutions.” All this, after the Cabinet had several weeks ago authorized concrete steps toward the physical division of Jerusalem at the request of the municipality, which had difficulty coping with the wave of violence and terror that swept the city.

In a Maariv poll taken over the weekend, it emerged that 69% of the Israeli public supports the return of Palestinian neighborhoods and villages that had been appended to Jerusalem after the 1967 Six-Day War back to the West Bank territories. This constitutes a tremendous majority of the Jewish population for de facto partition of the city. This is not a rare left-wing spasm, but the contrary: The present wave of terror greatly strengthens the desire of most Israelis to separate from the Palestinians. In that same poll, an amazing portion (58%) supported the transfer doctrine that had been espoused by Rehavam (Gandhi) Ze’evi, an Israeli tourism minister who was murdered by Islamic Jihad assassins in a Jerusalem hotel in October 2001, in the course of the second intifada.

The story of Jerusalem testifies to the complexity of the situation. After the resounding Israeli victory in the Six-Day War, Israel Defense Forces officers and government officials studied the map of Jerusalem and redesigned it. Until then, the city had been divided between Israel and Jordan. The Israeli side amounted to 38 square kilometers (15 square miles) and the Jordanian side around a fifth of that area, all told. The euphoria after the victory served to increase the Israeli appetite for more.

All the Arab neighborhoods and villages in the area were added to the united Jerusalem, increasing it to 126 square kilometers (the municipal area to this very day). Twenty-eight neighborhoods and villages that had never before been included in Jerusalem’s municipal territory were now added to what became “Greater Jerusalem,” the eternal Israeli capital, never to be divided again, Netanyahu promised. Today, Israel is learning the hard way that it had bit off more than it could chew.

Approximately 300,000 Palestinians live in these regions that were annexed to Jerusalem, and these people are viewed as partial Israeli citizens. They carry Israeli identity cards and are entitled to vote for the municipal council and the mayor, but not in the Knesset elections. They are not full Israeli citizens, but they enjoy full freedom of movement; they sport Israeli license plates on their cars and enjoy full Israeli social welfare benefits. The East Jerusalem Palestinian is a rather strange, hybrid creature: an Israeli citizen in some respects but not really a citizen at all. The maintenance of all these neighborhoods and villages costs the Israeli Treasury around 3 billion shekels a year (about $778 million). The recent terror wave greatly enhanced the collective Israeli desire to get rid of as many Arab citizens as possible.

Politician Haim Ramon carries the banner for those who feel that there is an urgent need to shrink Jerusalem’s municipal borders. Ramon, former deputy prime minister under Prime Minister Ehud Olmert, is a veteran politician who resigned from political life several years ago, but has been planning his comeback ever since. He told Al-Monitor, “The appending of the neighborhoods and villages in 1967 was a terrible historic mistake, but it’s not too late. We can fix it with a simple leadership decision.” His idea is to change the status of those same neighborhoods and villages from Area C, under full Israeli security and civilian rule, to Area B, under civil control of the Palestinian Authority but under Israel’s security control. This step would reduce the number of Palestinian residents of Jerusalem from today’s 300,000 to somewhere in the range of 50,000-60,000 Palestinians who live in the inner Palestinian neighborhoods that cannot be severed from the city. “Jerusalem’s security won’t be harmed,” Ramon emphasized, “because the IDF and the security apparatus will continue to have freedom of action in those neighborhoods. No one will transform them into Islamic State strongholds or launch rockets from them. But it is possible to separate most of the Palestinian population from Jewish Jerusalem and save around 2 billion shekels a year.”

Ramon’s statements enjoy widespread public support, but there is no one on the political map with the courage to raise the banner. Jerusalem remains sacred. Even opposition leaders Isaac Herzog from the Zionist Camp and Yair Lapid from Yesh Atid treat Jerusalem with great respect and give Netanyahu’s government sweeping support in the fight against the wave of violence. Neither so much as mentions the elephant in the crowded living room: the fact that East Jerusalem is a no-man’s-land lacking real sovereignty. The city has long been divided, but those on the Israeli side are only now beginning to understand that fact. There is an urgent need to face reality and reduce the deadly friction between the two nations.