The Israeli right has long accused the left of intending to divide Jerusalem in a future agreement with the Palestinians, but with continuing unrest in the city the ruling right wing must also face the possibility of a separation. 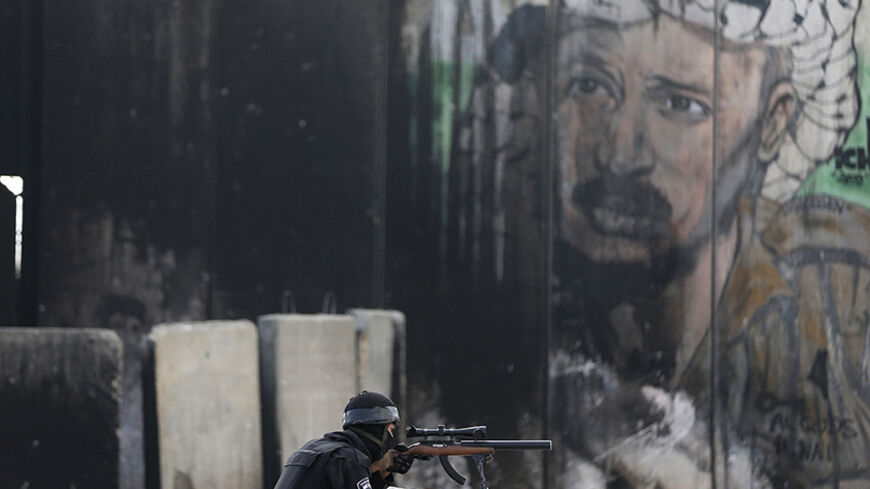 An Israeli border policeman takes position during clashes with Palestinian protesters following an anti-Israel demonstration in solidarity with Al-Aqsa Mosque, at Qalandia checkpoint near the West Bank city of Ramallah, Nov. 21, 2014. - REUTERS/Ammar Awad

On March 6, 2008, Ala Hussein Abu Dheim, a resident of the village of Jabel Mukaber murdered eight students at Merkaz HaRav rabbinical college in Jerusalem. Abu Dheim was 26 at the time, and two years prior to the murder he started getting closer to Islam. As a resident of the eastern part of Jerusalem, he carried a blue identification card (an ID card reserved for Israeli citizens and permanent residents) and was even employed for a while as a passenger driver in Jerusalem. Four months later, in July 2008, East Jerusalem Palestinians carried out two vehicular terror attacks in the city center on Jaffa and King David streets.

The government of Ehud Olmert and his Kadima party was on its way out. Olmert, who was trying with all his might not to get bogged down by the various criminal cases in which he was embroiled, invested much effort at the time in achieving a diplomatic breakthrough with Palestinian President Mahmoud Abbas. As expected, the terror attacks generated political unrest and Israel reacted with arrests and the demolition of the terrorists’ homes. The issue of disengagement from the city's border neighborhoods (of which Jabel Mukaber was one) emerged then for the first time on the political agenda, with a clear and decisive call for it by a senior cabinet member.

That minister was Haim Ramon, then deputy prime minister from the Kadima party. At the cabinet meeting held after the vehicular terror attacks of July 27, 2008, he called for the outlying neighborhoods to be severed from municipal Jerusalem. “Anyone who thinks that the Jerusalem terrorism is a limited problem and that the demolition of one or another house will help is sticking his head in the sand, and the main question is: Does the government want Jabel Mukaber and Sur Baher [East Jerusalem neighborhoods] to be part of the State of Israel or not?” Ramon asked. “The interest of the State of Israel is to get rid of these villages and neighborhoods, which were never part of Jerusalem and which endanger the essence of Israel’s capital as a Jewish and Zionist city.” His remarks generated a storm on the right, as well as within Kadima, because the party platform opposed the division of Jerusalem.

Although both Ramon and Olmert only supported moving the Arab neighborhoods on the city’s eastern outskirts to the area of the future Palestinian state — whether in the framework of an agreement (Olmert) or as a unilateral move (Ramon) — they were accused of “dividing the city” as though they were planning to cut the city into two halves and to give up Israel’s most important national and religious symbols. In fact, they intended to cut off the Arab neighborhoods on the outskirts of town, which over the years, and especially after the second intifada and the construction of the separation fence, had become closed, explosive compounds, to such an extent that it was no longer clear whether they had any affiliation at all with the city and the state.

Since the Likud party’s successful 1996 campaign slogan “Peres will divide Jerusalem,” political leaders from the center-left have preferred to stay away from the Jerusalem issue lest they be accused of dividing the city — one of the most serious accusations in the eyes of the Israeli public. This, despite that everyone knows full well that an agreement with the Palestinians based on the two states for two peoples solution will include a separation from the border neighborhoods. “Jerusalem united for eternity” has become an election cliche, paraphrased by politicians in the center of the political map, too. In the 2013 election campaign, for example, the chairman of the Yesh Atid party, Finance Minister Yair Lapid, accused the left of conducting negotiations for the division of Jerusalem, saying “we have no raison d'etre without Jerusalem. The Tower of David is important for Israel’s heritage and very existence, because it is more than a tower, it is a symbol. It is more important than [Tel Aviv’s modern-day] Azrieli towers.”

But whereas the politicians prefer to brush aside the Jerusalem issue, the harsh reality in the eastern part of town has not remained stagnant. According to data supplied this past summer by the nongovernmental organization Ir Amim on the 47th anniversary of the unification of Jerusalem, Israel’s control over East Jerusalem has grown considerably since the year 2000. Almost 10,000 housing units were built for Jews in a way that expended the area under Israeli control and deepened the divide between the Palestinian neighborhoods. Parallel to these changes, other problematic processes have undergone in the city, stemming from the growing poverty among its 300,000 Palestinian residents and the extent of the discrimination which they suffer. These processes contributed in turning the neighborhoods into violent, explosive borderline zones.

The murderous synagogue terror attack in the Har Nof neighborhood on Nov. 18 is turning out to be a significant milestone in the terror wave of recent months in Jerusalem. The use by the media of such terms as “a third intifada” or “the Jerusalem intifada” increased significantly at the horrifying sight of the worshipers’ bodies. Prime Minister Benjamin Netanyahu has still not used these terms, but in his speech on the evening of Nov. 18, he said, among other things: “We are in a lengthy war against abhorrent terrorism. … We are in a battle for Jerusalem, our eternal capital.”

One of the Likud Party ministers told Al-Monitor on Nov. 20: “What does that mean, ‘battle for Jerusalem’? What exactly does he plan on doing? After all, it’s quite clear to everyone that there is no solution for this terrorism. Razing the terrorist’s house or putting up barricades and blaming Mahmoud Abbas will not change the reality of being in the middle of what looks like a religious war.”

Absent a solution by Netanyahu and his right-wing government, the question of whether the political left-center has the courage to raise the issue of separation from the Arab neighborhoods in the next election campaign appears today more relevant than ever. At this of all times, with Jerusalem bleeding, the Israeli public is ripe for a real debate over the future of the city, and for the distinction between “dividing Jerusalem” with all the negative connotations this expression invokes, and separation from the Arab neighborhoods for security reasons.

Knesset member Shelly Yachimovich called this week for breaking away from Jabel Mukaber, and to the extent that terrorism continues to originate there, she will probably not remain the only one to publicly espouse such a position. At issue are a process and a ripening consciousness, like those that preceded the Israeli withdrawal from Lebanon and subsequently the separation from Gaza. Perhaps even Netanyahu, who accused Peres of dividing Jerusalem, will himself come to the same conclusion.