Is Jerusalem bus blast just a sign of things to come?

As the Passover holiday approaches, many Israelis fear the current violence may evolve into larger scale attacks like the bus bombing that shook Jerusalem Monday night. 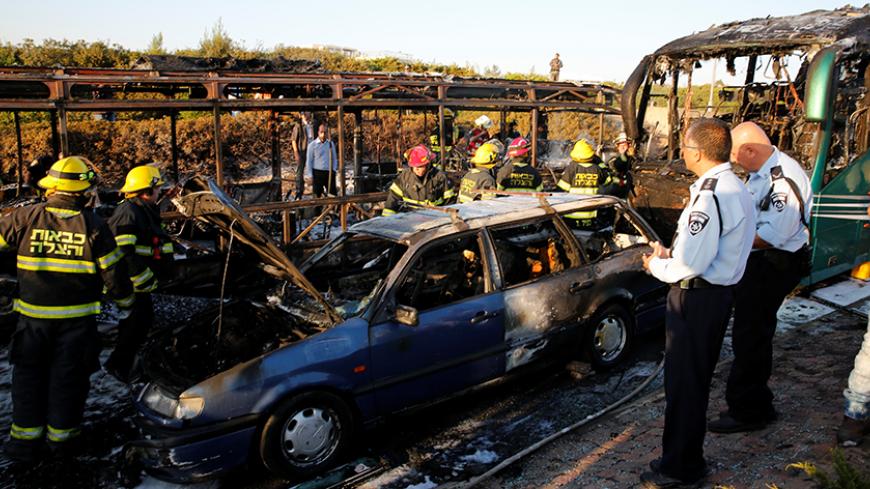 Emergency workers search the scene after a blast on a bus in Jerusalem, April 18, 2016. - REUTERS/Ronen Zvulun

Hell has returned to Jerusalem. On the night of April 18, a loud blast shook Bus No. 12 on its route through the Israeli capital with several passengers. The explosion started a fire on that bus as well as another next to it and a private vehicle. Fire quickly engulfed the area, instantly returning Israelis to the horrific second intifada more than a decade ago that filled the streets of Israel with blood.

Radio and television networks, experienced with such events, immediately responded with live coverage, opening old wounds and fears in many Israelis. For the first few hours, the police were not certain that it was, indeed, a terror attack. By evening it was clear: An explosive charge was evidently planted on the bus and had gone off. As of the time of this writing, the identity of the terrorist is still unknown. No terror organization has assumed responsibility for the attack. A total of 21 wounded are presently hospitalized, with three in serious condition.

During the second intifada, an attack like this would have received only limited exposure on the media. In those days, 21 wounded people hardly made a spike in the statistics. Israel groaned in pain under an unprecedented barrage of terrorist hellfire. Suicide bombers blew themselves up in restaurants, nightclubs, buses and hotels. On their bodies, the attackers wore explosive materials filled with shrapnel to maximize the damage. Israel counted dozens of fatalities in every such attack, and more than 1,000 Israelis were murdered all told. The national trauma continues to haunt the collective Israeli soul, and the scars have not yet healed.

After a year and a half of violence, Israel embarked on Operation Defensive Shield, constructed a separation fence and addressed the terror infrastructure in the territories. The Israel Defense Forces (IDF) renewed control over the Palestinian cities, and the Shin Bet began to wipe out terror infrastructure in strenuous, painstaking work. Israel won the terror war unconditionally. Hamas leaders in the territories were killed or imprisoned. All the hotbeds of terror were located and eliminated.

Israel enjoyed more than a decade of unprecedented peace and quiet. But then, last October, terror returned in a surprising reincarnation: Waves of individual attackers, mainly youths, fell upon Israelis with knives and hatchets and attempted to run them over with their cars. Although Israel was unprepared for this challenge, the events did not shake the country too hard. This wasn’t “the real thing.” But in Jerusalem on Monday, when a bus exploded without warning in the streets of the capital, it seemed to many Israelis that the nightmare had returned.

But in truth, it hasn’t, at least not yet. “There is no reason to think that the horrific scenes of the earlier decade are on their way back,” a senior Israeli defense source told Al-Monitor this week on condition of anonymity. “In the territories today there is no terror infrastructure, no capability, no terror cells, no standard explosives, no ‘engineers’ and no command backbone. The presence of the IDF and the Shin Bet anywhere that terror cells arise enables us to use the 'mowing the grass' method, which does not allow terror to raise its head.”

The Israeli defense system insists that there is no reason for worry. While the attack in Jerusalem eluded the Shin Bet and there was no early warning, it is reasonable to assume that we are facing an isolated, rather amateur organization that will soon be cracked. “The charge that exploded in the bus was not standard,” an Israel intelligence source told Al-Monitor on condition of anonymity. “It was clearly an improvised explosive. Evidently, it is a local cell that succeeded in carrying out a rare attack. This is not the swallow that heralds the coming of spring.”

But the Israelis have not calmed down, as while all this is going on, the southern zone facing the Gaza Strip has also heated up with the discovery of the new Hamas attack tunnel.

Prime Minister Benjamin Netanyahu is desperately trying to retain the “Mr. Security” image that he has maintained over seven years of his rule over Israel, but it is getting harder and harder. From the right, Yisrael Beitenu chair Avigdor Liberman pursues him. From within his coalition, he has HaBayit HaYehudi chair Naftali Bennett grumbling, and from the center of the political map, Yesh Atid leader Yair Lapid nips at him in the polls. Netanyahu will have to come up with answers very soon.

It is clear to the Israeli defense system who is working to promote these attacks: All fingers point to Hamas, and especially to the head of its military wing, Mohammed al-Deif. Although Hamas has not taken responsibility for the bus attack, it did praise it and is sharing a video on the social networks that features a bus explosion.

The attack in Jerusalem takes place against the background of the heating up of the southern zone. In Gaza, Hamas is aware that it is still not ready for a direct confrontation with Israel, but it is trying to kindle additional fronts against Israel in the West Bank. So far, Hamas’ victories have been very limited. The strike in Jerusalem was the first significant success in this sphere.

At the end of this week, Israel will celebrate the Passover holiday. Every year, Jewish holidays create worrisome friction points at which tension rises between the sides and evil winds blow. This year is no exception, and everyone is tensed for a potential escalation.

The main worry is the renewal of tension over the Temple Mount. After a relatively calm hiatus, Jordan announced this week that it will not install closed-circuit surveillance cameras at the site. Simultaneously, Palestinian elements have renewed their activities surrounding the site. The Israeli inspector general, Police Commissioner Roni Alsheich, sent a letter this week to the state’s leaders and warned of tensions heating up around the Temple Mount. Alsheich, a former deputy head of the Shin Bet, called for placing extreme limitations on the ascension of Israelis to the compound. The problem is that there is no lack of extremists on both sides who are eager to pour fuel on Jerusalem’s glowing embers.

Both the Israelis and the Palestinians will have to exert special efforts to keep the current spring from growing hotter than usual.