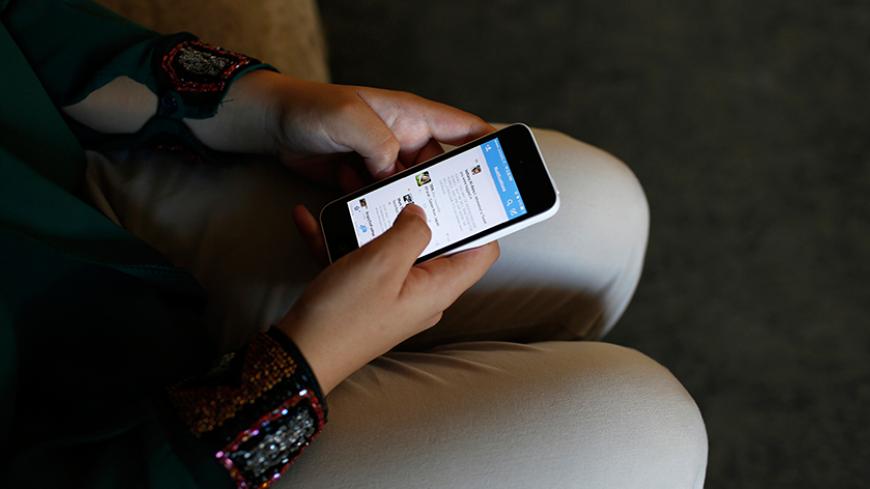 A Palestinian teenager uses her phone to tweet in her family's home in Gaza City, Aug. 10, 2014. - REUTERS

“There is no leadership behind the current wave of terrorist stabbings,” says Orit Perlov, social media analyst on trends in the Arab world, at the Institute for National Security Studies. Perlov began to see indications of young Palestinians organizing online right after Operation Protective Edge (July-August 2014). She describes the current wave of terrorist stabbings as a case of radicalization, without any leadership, and without any clearly defined objectives. Hamas and the Islamic Movement are simply trying to seize control of it and manage it accordingly. In an interview with Al-Monitor, she points to the various milestones since last year that led up to the outbreak of terror over the past few weeks, and explains the roles and impact that the Internet has on this lost generation of Palestinians and on the Israeli public. And yet, despite all the discouraging news, she also has a message of hope.

Al-Monitor:  For the past few days, the conventional wisdom among pundits has been that social networks are behind the current wave of terror. What do you think about that?

Perlov:  The answer is much more complex than that. On the one hand, the Internet is the largest information platform in the world. It broke the monopoly on information. There are no more edited images. You get everything sent directly to your smartphone in real time. You actually see the female terrorist who stabbed a passerby and the terrorist who was killed. It all comes to us directly, in an unmediated format. These images penetrate our homes in real time, and in very high doses.

The fact that young Palestinians are confined to Gaza, without the possibility of going anywhere, does not affect their ability to disseminate ideas. There is no way to stop the spread of ideas in this age of social networks. To understand the speed with which information is disseminated, consider the Islamic State’s horrifying video clip of the Jordanian soldier being burned to death. It hit 150 million views in just seven minutes, the time that it took YouTube to take the video clip down.

The Internet reinforces the way we perceive the situation. That is why four stabbing incidents, which ended in minor injuries, can cause enough tension to make people feel vulnerable. At one time, there were buses blowing up in the middle of our cities, causing dozens of casualties each day. Still, the level of hysteria wasn’t as high as it is now. If we were to analyze the situation objectively, we would see that in terms of security, things are actually better today. Nevertheless, people feel more vulnerable. They feel as if the police have no way to protect them.

Al-Monitor:  What about those young people who wake up one bright morning, grab a knife and set off on a stabbing spree? Are they influenced by the Internet?

Perlov:  Over the past few years we have seen how the Internet helps to stimulate people to act. There is no need for logistics, and there is no need for lengthy planning, as we saw in Tahrir Square or even in the social justice protests here [summer of 2011]. In the current situation, what happened was that soon after Operation Protective Edge was over, a “Crash and Stab” campaign began. It was a very simple idea, with the appropriate images released on Facebook and Twitter. These consisted of caricatures showing young terrorists running over soldiers with their cars.

The campaign had no clearly defined objective. In that sense, it was reminiscent of campaigns by the Islamic State. The idea was to sow fear at a minimum cost, without using suicide belts. All it would take was a knife or a car. And so, over the past few months, there were several attacks in which people were run over. The problem is that this campaign had no narrative. To put together a good story, you need a plot. You need a narrative. The people behind this "Crash and Stab” campaign were just young Palestinians who were unemployed and bored. Neither Hamas nor the Islamic Movement were involved. Only after the campaign caught on did Hamas and the Islamic Movement jump on the bandwagon and try to use the momentum to bring people out to the streets. In other words, the two movements realized that something spontaneous was happening. Now they are trying to put all the disparate parts together and benefit from the situation.

Al-Monitor:  How do they do that?

Perlov:  They take everything these kids are doing and dress them up with the kinds of objectives with which people can identify. This is where the concept of Al-Aqsa enters the picture, timed to coincide with the Jewish holidays [September]. The Islamic Movement built a campaign, the name of which means, “It will not be divided.” It was intended to incite the population by accusing Israel of dividing the holy sites, just like they did at the Ibrahimi Mosque [Cave of the Patriarchs] in Hebron. I suggest that just like the word “Holocaust” raises certain associations for us and spurs us to action, the “It will not be divided” campaign provoked the Muslim population by raising negative connotations. The Muslim community exposed to this campaign is convinced that Israel is about to divide the Temple Mount into Jewish and Muslim areas.

Al-Monitor:  In what towns were these campaigns based?

Perlov:  They came out of Ramallah, Tulkarm and Nablus. A group of young people identified with the Islamic Movement disseminated these ideas in the universities. Later, when Hamas saw that it was catching on, they jumped onboard and started a campaign called “At Your Service, Al-Aqsa.” The result of this was that both Hamas and the Islamic Movement were able to frame the phenomenon. What happened later was that the State of Israel and the Palestinian security forces decided to take action against these online campaigns, thinking that they were dangerous. The result was a wave of arrests in the universities. This kind of security collaboration between Israel and the Palestinian Authority created enormous unrest on the campuses. The situation continued to snowball. To protest these arrests, a new kind of revolutionary guard, this one made up of children, appeared in the refugee camps. It was their job to keep watch at night and warn the population if the security forces were coming to arrest young people. There was a lot of anger, and it was very tangible online. I think that this is the reason for the last wave of terror.

Al-Monitor:  So it’s not an intifada?

Perlov:  As we know from the past, one thing leads to another, and you can’t always tell how it will all end. The Internet starts heating up, with every kid in Gaza posting “The intifada has started” or “Jerusalem intifada.” This creates a nonstop buzz morning, noon and night. For people who live online, and young Palestinians do live online, it looks like the intifada has already started. They can’t go out, because everything around them is closed, and they are convinced that there is an intifada underway. In this sense, the Internet broke the closure of Gaza. The Internet has no borders, so whatever has to break out will find a way and a place. That is why we are seeing unrest among Israeli Arabs. That kind of unrest is possible here.

Al-Monitor:  If it’s not an intifada, then what is it?

Perlov:  Whenever an event is in progress, there is no way of knowing how it will end. If we look at the situation from the perspective of Operation Protective Edge, we could certainly say that the Palestinian public has no interest in paying the price of an intifada. Hamas doesn’t want that happening now, which is why we don’t see the masses of people taking to the streets — the big numbers. What is true, however, is that Hamas has been trying to ignite East Jerusalem and the West Bank for a very long time. In my opinion, the climax is already behind us, although Hamas will continue in its efforts to set the ground on fire.

Perlov:  He lost his legitimacy a long time ago. He’s a collaborator with the Zionist entity, as far as these young people are concerned. Hamas is also losing legitimacy among the youth, who are getting more and more radicalized, and so, the situation is getting more chaotic. We killed their leadership, and what we are left with now is an octopus with plenty of arms, but without a brain. There are plenty of children involved, but they have no leadership, so there is no way to control them. I think that all of this will eventually wear itself out, because there is no real objective.

More generally, however, you can argue that this is what we will continue to face as long as the occupation persists and we try to maintain the status quo. There will be no quiet here. The Internet makes it possible to remove all barriers. When we’re talking about teenagers of 15, they have no recollection of the second intifada either, and the leadership has no influence on them. The disconnect between these young people and the Palestinian leadership is absolute, which is why I don’t think that any gestures will manage to restore calm.

Al-Monitor:  How do these campaigns work in Gaza?

Perlov:  There isn’t a single person in Gaza without a third-generation smartphone. I always say that you can’t kill the Internet. The Internet mutates and adapts. If you turn something off — like a Facebook page, for example — something else will pop up to take its place. If you delete a dozen Twitter pages, two dozen others will pop up instead. We’re talking about a very, very young population. The population of Gaza is 1.8 million, with about 50% under the age of 25. Of these, 40% are unemployed. It’s a very volatile situation. It is easy to understand how ideas spread across the Internet there, until young people are eventually yanked into taking drastic measures such as stabbings.

Al-Monitor:  What kind of measures would you suggest to restore calm?

Perlov:  We have to think differently. For example, we could ask Hussein bin Abdullah, the 20-year-old son of the Jordanian monarch, to produce a film clip with a reassuring message saying that Israel has no plans to partition Al-Aqsa. That would calm people down. Hussein bin Abdullah is the biggest Internet star among young Palestinians. He is half-Palestinian himself, and he is the same age as them. He is a part of them. Why would he agree to do something like that? Because these riots could spread to Jordan. By making a video like that, he would be helping his father.

The second thing to do is to create jobs for the young people in professions at which they excel. This could include everything to do with the digitization of Palestinian government bureaucracies, for example. All of it could be digitized. These kids are very talented. They need to be given hope. People who are not bored, who have a job and a salary, do have something to lose.