Talking to Al-Monitor, Chairman of Yisrael Beitenu Avigdor Liberman explains his recently released "10-point program" to rein in terrorism and criticizes the government for its incompetence in defeating terrorism. 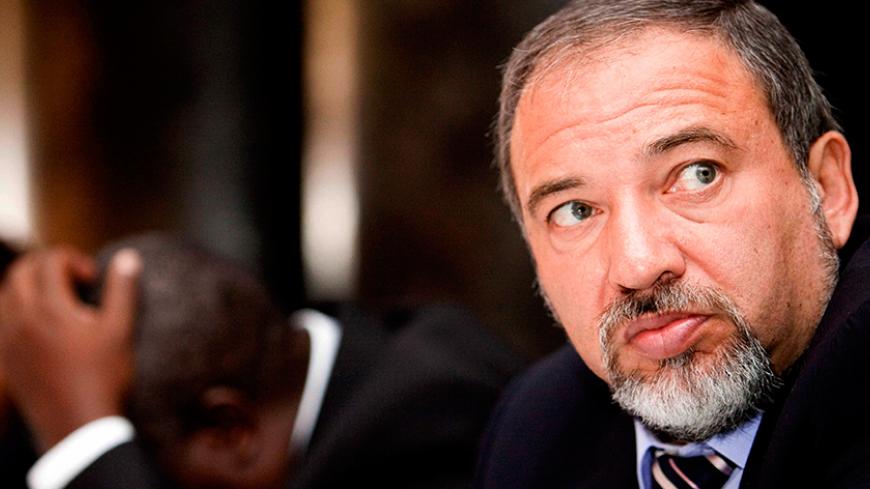 “Instead of fighting against terrorism, this government is paying protection money to terrorists. It’s happening right now.” In an interview with Al-Monitor, Avigdor Liberman, the chairman of Yisrael Beitenu, leveled this charge against Finance Minister Moshe Kahlon’s decision to transfer half a billion shekels ($127 million) to the Palestinian Authority. Kahlon’s gesture is intended to prevent a complete collapse of the PA and quiet down the current wave of terrorism.

Kahlon’s decision was first revealed by daily Yedioth Ahronoth on Feb. 26. Liberman could not have asked for a better time to hammer more nails into the right-wing government’s coffin. At a speech he delivered just one day earlier at a Yisrael Beitenu conference at the Jerusalem Convention Hall, he introduced his own “10-point program” to stop the wave of terror. After calling for the reinstitution of Israel’s targeted assassination strategy of wanted terrorists, his second point was to stop the transfer of all funds to Palestinian President Mahmoud Abbas. Less than a day later, Kahlon was making headlines with his own news, which demanded a response. Only, Liberman had already pre-empted him.

These are good days for the former foreign minister, who rose like a phoenix from the corruption scandal that plagued Yisrael Beitenu and threatened to tear down the party that he had built with his own two hands. He teetered on the electoral threshold throughout the last election campaign, only to cross it with six seats. Despite everyone’s predictions, he gave up the Foreign Ministry and decided to join the opposition. So far, his decision has proven itself as the right one for him. He has been climbing in the polls ever since and is practically already waging a new election campaign. Actually, the Yisrael Beitenu conference looked more like the launching of a new campaign. It had a new slogan — “Only Liberman can bring security” — and it featured a bellicose speech about defense that veered sharply to Prime Minister Benjamin Netanyahu’s right. Just as in his previous campaigns, Liberman focused yet again on a topic that mostly concerns Israelis. He then went on to mark himself as the next defense minister.

Liberman spoke to Al-Monitor about his "10-point program." The text of the interview follows:

Al-Monitor:  Do you believe that the half billion shekels that Kahlon decided to transfer to the PA will end up funding terrorism?

Liberman:  Most of that money will eventually end up funding terrorism. Instead of fighting against terrorism, this government is paying protection money to terrorists. There is no other way to look at it. The question is: Where does most of the money actually go? Does it benefit the civilian population of Judea and Samaria or does it go to fund terrorism? Unfortunately, when you analyze the current situation in the PA, it seems obvious that most of the money goes to fund terrorism. When I look at the top line items in their budget to figure out how they really spend the money, the first thing that stands out is pensions for the families of terrorists. The family of someone sitting in an Israeli prison receives as much as 15,000 shekels [$3,800] a month, when the average salary of a teacher in Ramallah is just 900 shekels [$230]. There are thousands of people like that, sitting in prison. Another large sum goes to the families of people killed in clashes with the IDF [Israel Defense Forces]. They also get up to 15,000 shekels a month.

More money goes to cover the legal expenses of terrorists in Israeli courts. All of that is paid for by Mahmoud Abbas. He doesn’t just cover the cost for Fatah activists, but for members of Hamas and Islamic Jihad too. They all get money from him. And the money is also used to finance incitement in the Palestinian media. So instead of restoring calm, what happens is the exact opposite. Instead of defeating terrorism, the Netanyahu government tries to contain it, and that is its big mistake. They are trying to buy peace and quiet with lots and lots of money.

Al-Monitor:  But it can also be argued that the intifada of individuals is rooted, among other things, in the sense of frustration that young Palestinians feel, and that this could be assuaged by improving their economic situation, don't you think?

Liberman:  That’s the big mistake. This is not an intifada of individuals. People don't realize it. This is organized terrorism. The classic terrorism of the past was based on cells and the use of various means of communications to activate people. Today terrorists don’t need any of that. They have replaced cells with social networks. Still, it is all funded. Incitement is still being organized by professionals, and they get money for it from Mahmoud Abbas.

Al-Monitor:  In the current wave of terrorism, young people spontaneously commit terrorist attacks. How can you rein in this mood, this “concept”?

Liberman:  But they are still organized, like I just said. That is why we have to attack the people issuing the orders and organizing activities over the Internet. Given these circumstances, there are two possible approaches. The first is to go after the lower ranks, or the small fish, if you will. Alternately, it is also possible to go after the organizers and those who give the orders. It’s the same as the difference between drying up the swamps or going after individual mosquitoes. What Netanyahu and [Defense Minister Moshe] Ya’alon are doing is swatting the individual mosquitoes instead of drying up the swamp. What I propose are 10 specific points, which include more than just stopping the transfer of money. It also includes expelling the families of terrorists to the Gaza Strip, denying residency status to Arab residents of East Jerusalem who are involved in terrorism, as well as to their families, passing legislation imposing a death penalty on terrorists and stopping the transfer of terrorists’ bodies to their families.

Al-Monitor:  Do you really think that Ya’alon, a former chief of staff with enormous security and operational experience, is such a terrible defense minister?

Liberman:  I don’t think he is fit for the job. He’s just not built for it. It’s too big for him. It’s very possible that he was good at field operations, but I have issues with his very approach. What started the whole argument between us over Operation Protective Edge [in the summer of 2014] was that I said, “You’re not going all the way. If we’re not willing to rein in terrorism in Gaza right now, then it will spill over into Judea and Samaria, and from there to Jerusalem, and from there to metropolitan Tel Aviv.'' That's exactly what is happening now. The minute you leave a source of terrorism intact and fail to harm them ideologically, financially or operationally, there is no way left to rein in that terrorism. Netanyahu and Ya’alon really are swatting at mosquitoes. That’s the difference between us. I am talking about defeating terrorism, while Netanyahu is talking about containing it.

Al-Monitor:  There have recently been several initiatives to withdraw unilaterally from certain neighborhoods in East Jerusalem in order to stop the wave of terror. What do you think about that?

Liberman:  Right now, none of that is relevant. It’s impossible to reach a diplomatic arrangement while we are still in the midst of this wave of terrorism. It’s like laying the foundations for a new house right in the middle of an earthquake. You can only reach a diplomatic arrangement after the dispute is decided. All historical precedents prove that. If the dispute hasn’t been decided, there is no way to reach an agreement. That is exactly what is happening now in Syria, Iraq, Libya and Yemen. The fighting continues. Only after the outcome has been determined decisively is it possible to reach a diplomatic arrangement. That’s how World War I and World War II ended. Only after Nazi Germany surrendered in World War II could they reach an agreement and redraw all the borders in Europe and Southeast Asia.

Al-Monitor:  Do you concur with the right’s criticism of the IDF leadership, including the Chief of Military Intelligence Herzl Halevi, who warned that the continued deterioration of the economic situation in Gaza will be explosive?

Liberman:  I will not engage the top military brass in arguments, and I would suggest to all politicians to do the same. They should not be engaging the army and its generals in debates through the media. There are appropriate forums for that. There’s the [diplomatic-security] Cabinet, and there are all the subcommittees of the Foreign Affairs and Defense Committee. Any politicians with something to say should say it there instead of arguing with the military in public.

Al-Monitor:  Is the crisis that faced Yisrael Beitenu behind you?

Liberman:  I think we’re in a good place right now. We gave up our seats in the government and remained faithful to our principles. So, for example, I heard that Ministers Yariv Levin and Gilad Erdan opposed Kahlon’s transfer of half a billion shekels to the Palestinians, but their hands are tied. And they can’t fight it from the inside, because as soon as you are part of the coalition, collective responsibility encompasses you too.

It is my assessment that new elections are approaching. Once the government starts to lose public support, the breakdown begins. Nothing can prevent it, because no politician wants to be identified with the failure. Basically, no politician has any interest in advancing the election, because it is more convenient for them to stay where they are, instead of going to primaries again. But then the government loses public support and elections become inevitable. That is what we are heading toward now.