Instead of doing all that he can to prevent the collapse of the Palestinian Authority, Israeli Prime Minister Benjamin Netanyahu's passivity reveals his real strategy. 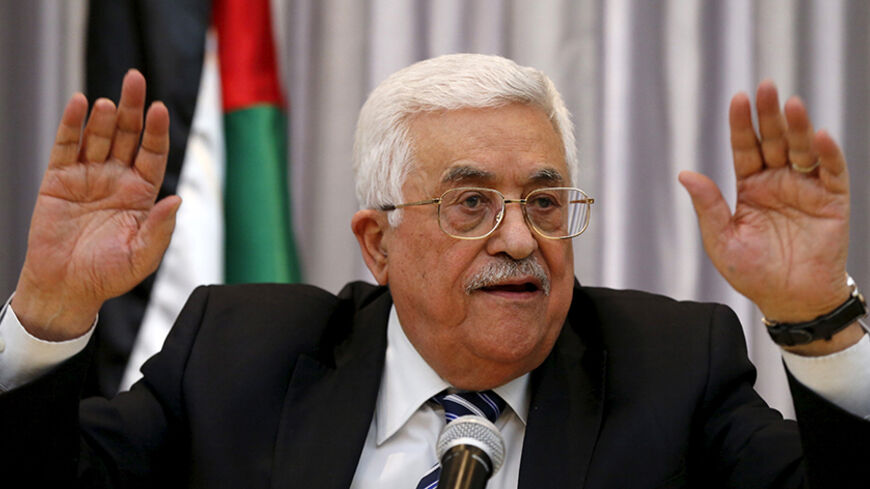 “I don’t wish for the collapse of the Palestinian Authority,” Prime Minister Benjamin Netanyahu declared Nov. 30 in a conversation with journalists at the International Climate Conference in Paris. “Israel is trying to take steps to prevent this scenario from happening,” Netanyahu said, though he refused to go into detail as to what those “steps” might be. The prime minister then wagged an accusatory finger at Palestinian President Mahmoud Abbas, and used a quick meeting with US President Barack Obama to complain about Abbas. He even made a point of describing the meeting to the press, saying, “I told Obama, ‘Look at how Abbas is continuing with his incitement.’”

Based on what has happened on the ground since that conference, Netanyahu is hardly going out of his way to prevent the collapse of the Palestinian Authority. According to one report in Israeli daily Haaretz on Jan. 5, Netanyahu convened two special Cabinet meetings to prepare for the inevitable “collapse of the PA.” At each of these meetings, security officials presented a series of steps that could prevent the PA’s collapse, including gestures to the Palestinians and providing shielding to jeeps used by Palestinian forces, to assist them in their efforts to fight terrorism. Nor was this the first time since October — when the current wave of terrorism started — that the Cabinet was presented with intelligence reports that Abbas is actually trying to control the terror attacks. This can be seen in the noticeable drop in official incitement against Israel, and the arrest of Hamas members suspected of involvement in terrorist activities.

Based on this logic, if Abbas has been making real attempts to put a stop to the current wave of terrorism, if the level of incitement has been reduced and if security cooperation between Israel and the PA is good — as senior members of the defense establishment still claim — why is Netanyahu doing nothing to stop the PA from collapsing? While he is not actually encouraging its collapse, Netanyahu is standing to the side and letting whatever happens happen, as one Cabinet member described the situation in a conversation with Al-Monitor.

Netanyahu’s actions seem to indicate that he actually does want the PA to collapse, since this could serve him as a bargaining chip with the international community, which blames Israel for the current diplomatic stalemate. The collapse of the PA would finally put an end to the process that began with the Oslo Accord in 1993. It would usher in an new era for Israel and the Palestinians — one in which the very idea of a two-state solution has no basis in reality. The Palestinians would go on living their lives in some kind of autonomous entity, while Israel would control all of the territory, at least in terms of security.

That scenario is exactly the vision advanced by the extreme right or its representatives in the government and the Cabinet. These not only include coalition partners such as Naftali Bennett, chairman of the HaBayit HaYehudi Party (who supports the collapse of the PA and the annexation of West Bank Area C, where Israel maintains civil and military control), but even Likud ministers such as Zeev Elkin and Yisrael Katz. Recently, Katz has gone so far as to call for imposing a closure on the territories — a move that conflicts with the recommendations of top defense officials, since it would likely expedite the collapse of the PA.

In fact, the collapse of the PA now seems closer than ever. There are no moderate forces in the fourth Netanyahu government to balance the extreme right, as there were when Ehud Barak was defense minister, or later when Yair Lapid (Yesh Atid) and Tzipi Livni (Hatnua) were part of the Cabinet. While Finance Minister Moshe Kahlon, chairman of the Kulanu Party and a senior member of the security Cabinet, is considered a moderating influence, he insists on focusing on socio-economic issues and shows little enthusiasm for diplomatic and security affairs. Netanyahu and Defense Minister Moshe Ya’alon are also considered Cabinet moderates, but while Ya’alon is motivated by professional considerations, Netanyahu has clear political and ideological interests at stake.

Netanyahu was never an advocate of a two-state solution. Throughout all his terms as prime minister, ever since 1996, he was dragged kicking and screaming in that direction, including his Bar-Ilan speech and his short-lived freeze on construction in the settlements.

Since 2009, Netanyahu and Avigdor Liberman (Yisrael Beitenu), who twice served Netanyahu as foreign minister, have worked together and separately to weaken Abbas among Israelis, Palestinians and the international community. Liberman at one point lashed out at Abbas on a weekly basis, berating and insulting him, while Netanyahu stood by in silence. Obviously, this behavior had a lethal effect on Israelis, who have come to believe in the idea of a two-state solution less and less over the years.

This trend was evident in the latest Peace Index poll released by the Israel Democracy Institute in December. The index showed that only a small majority of Israeli Jews (52%) now support a two-state solution, while 43% oppose it. By way of comparison, the number of supporters in previous years was about two-thirds or more.

There can be no doubt that efforts to brainwash the Israeli public, led by Netanyahu and Liberman, had a role to play in these figures. Meanwhile, Abbas has proved over the years that he is not some helpless, featherless chick struggling to survive (as he was once described by Ariel Sharon when Sharon was prime minister). Abbas has a strategy of his own to win Palestinian state recognition in international institutions.

Netanyahu is now preparing for yet another run for the prime minister’s office, as he believes that he is electable for a fifth term. His biggest rivals on the right are Bennett and Liberman. The far right has been challenging Netanyahu incessantly, and he has done everything he can not to play into their hands by presenting a moderate stance. At the same time, Netanyahu must also deal with the international community. He is, therefore, fully aware that he cannot be seen to take active measures to bring about the PA’s collapse. This requires him to take the position that the collapse of the PA would be bad for Israel. That way, at least, he cannot be blamed when it actually happens. This is why it is in Netanyahu’s immediate interest — so it seems — to maintain low-level support for the PA and not to be viewed as rushing with all his forces to its rescue, while at the same time continuing to publicly attack Abbas. And he must do that even though senior defense officials repeatedly tell him that Abbas is actually taking steps to rein in the current wave of terrorism.

Netanyahu may not hope for the collapse of the PA, publicly at least, but his passivity seems to indicate that he actually does. That's why Knesset member Livni’s call for the Knesset’s Foreign Affairs and Defense Committee to hold immediate discussions about the possible collapse of the PA is so important. The discussion could at least give some indication as to what the prime minister’s real intentions are.