Prime Minister Benjamin Netanyahu has addressed the public directly after the stabbing in Tel Aviv, telling Israelis that they aren't facing a new intifada and that Israel's most experienced security chiefs are capable of containing the violence. 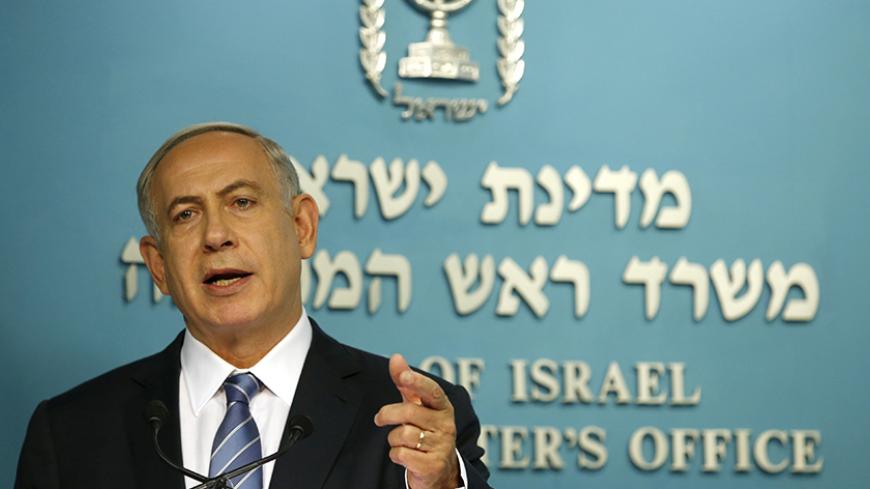 Israel's Prime Minister Benjamin Netanyahu gestures as he speaks during a news conference in Jerusalem after four people, including an Israeli soldier, were stabbed and wounded in Tel Aviv, Oct. 8, 2015. - REUTERS/Ronen Zvulun

The idea of holding a special press conference was first tossed around the prime minister’s office soon after the stabbing attack took place Oct. 8 in downtown Tel Aviv, right next to the Defense Ministry, the Azrieli Towers and the train station.

It was 3 p.m. The street was bustling with cars and pedestrians. Suddenly, a Palestinian attacked and wounded five passersby with a screwdriver. The ordeal ended when an Israel Defense Forces (IDF) officer who happened to be in the vicinity killed the assailant. “Terrorism Strikes in Tel Aviv” read the headlines of many news sites. For the prime minister and his staff, the incident marked a turning point for the public. An overwhelming sense that personal safety and security had disappeared emerged from the images of the incident and the interviews with eyewitnesses. As soon as he acknowledged this sharp swing in mood, Prime Minister Benjamin Netanyahu ordered a press conference in an attempt to maintain his image as “Mr. Security.”

If there is one field where Netanyahu has proved to be a master of unparalleled talent, it is Israeli public opinion. He has a phenomenal knack for transforming Israelis’ most basic fears into strategy. It is precisely this that helped him win his fourth election to the prime minister’s office just six months ago. As soon as Netanyahu identified the attack in Tel Aviv as a turning point, he responded immediately to the public.

What happened at the press conference should be seen through this prism, since he didn’t actually say anything new. He offered no new vision. What Netanyahu did was appeal directly to the public and especially to worried Israeli mothers, telling them that their concern was natural and that he and the defense establishment “are doing our utmost to restore your security and that of your children, to all Israel.”

The supporting cast surrounding Netanyahu was intended to serve the same purpose. They were chosen to restore immediate calm and restrain any negative sentiments emerging among the public. Netanyahu was flanked by two senior Likud ministers: Minister of Defense Moshe Ya’alon and Minister of Internal Security Gilad Erdan. Sitting beside each of them were the security forces’ top brass: Chief of Staff Gadi Eizenkott and Interim Inspector General of the Israel Police Bentzi Sau.

Netanyahu spoke first, of course. Once he was done, each of the four men delivered a brief statement. They had obviously coordinated their messages. This is not a third intifada, they declared, but a wave of terrorism that is being handled well by the people most capable of dealing with it. With these four senior officials, two of whom are not politicians, standing by Netanyahu’s side to support his narrative, the public was left with the impression that there is someone that they can rely on. In other words, the prime minister is the responsible adult in the room, setting the right tone.

This was the first press conference called by Netanyahu since the wave of violence erupted three weeks ago, and he even allowed the press to ask questions. But even the most incisive failed to extract new answers. With all the adeptness he is known for, Netanyahu stayed on script.

There was only one brief moment when he sounded somewhat reticent, but he immediately recovered. It happened when he was asked about Palestinian President Mahmoud Abbas’ attempts to restore calm and whether he thinks the Palestinian leader is still a source of incitement, as he claimed in his speech before the UN General Assembly just a week ago. At this point, Netanyahu was torn between his immediate political needs and the real answer. On one hand, he is well aware that Abbas is doing everything he can to restore calm. Senior IDF officers said as much over the past few days. On the other hand, Netanyahu also realizes that he cannot flatter Abbas right now, if only for political reasons. To his right-wing electorate and especially the camp of his political rivals, HaBayit HaYehudi leader Naftali Bennett and Yisrael Beitenu head Avigdor Liberman, that would sound like he was being obsequious to the Palestinian leader.

So Netanyahu chose to dance between the raindrops, saying, “Until just a few days ago, Mahmoud Abbas spoke about how the Jews are purging the Temple Mount. This incited the area. There is no doubt about it. … Over the past few days, there has been a change in Abbas. He realizes now that if that particular area is ignited, the whole surrounding area will catch on fire, too, including Judea and Samaria, and that has implications for the Palestinian Authority. We must work together to restore calm and contain the rioters. We would be delighted to receive cooperation from the Palestinian Authority. If that is the direction they are taking, it has my blessing.”

This statement is far more important than his meaningless one about the need to form a broad national unity government with the Zionist Camp. What it does is make it even clearer that Netanyahu has neither the desire nor intention to re-engage the Palestinians on the diplomatic track. He would rather maintain the status quo for as long as he can. It also puts Netanyahu’s perspective on the current political situation into greater focus. Plans to bring the Zionist Camp into the coalition have led nowhere to date, and it does not matter right now why the plans failed, who is at fault or even if Netanyahu really wants that to happen. What this means is that Netanyahu is still stuck with his right-wing government. As such, he cannot allow himself to take an embracing approach vis-a-vis Abbas.

From a detached political analysis, Netanyahu’s situation at the end of this week of terrorism isn’t bad at all. It doesn’t matter that ministers from his own party have demonstrated against him and are now regulars in the protest tent that was set up across from his office to oppose what they consider his conciliatory response to the wave of terrorism.

Netanyahu is well aware of the kind of game that Ministers Yariv Levin, Zeev Elkin and Haim Katz are playing. They are courting the vote of those settlers who became Likud members and now fill the protest tent. These ministers are politicians, first and foremost. This is how they survive, and it is how they prepare for the next party primaries, even though no one knows when they will be held. Besides, Netanyahu knows that Elkin and Levin know that there is no other leader on the right who could win an election, in the Likud or in any other party.

Netanyahu is aware of his advantage, too. He also knows how to score political points from the current wave of terror, especially when the public refuses to believe that his center-left rivals Isaac Herzog (Zionist Camp) and Yair Lapid (Yesh Atid) have a better formula to resolve the situation. Netanyahu even earned Lapid’s praise for his decision to ban all Knesset members — Jews and Arabs alike — from visiting the Temple Mount, and his statement, aimed at the right, that he will not respond by building in the territories so as not to damage relations with the Americans. As for the message aimed at the international community, he repeats his commitment not to change the status quo on Temple Mount. All this makes Netanyahu seem responsible and sane, especially when compared to all the Bennetts and Libermans.

Netanyahu’s restrained behavior in the face of the current wave of terror suddenly puts him in the political center, with Bennett and Liberman to his right and Herzog and Lapid to his left. As long as he manages to contain the violence, this situation of “contained security tensions” will benefit him, shield him from diplomatic issues and make it difficult for the center-left to call for a renewal of negotiations. After all, the right will argue that there is no one to talk to now while we are being stabbed in the very hearts of our cities.