In an interview with Al-Monitor, Foreign Minister Avigdor Liberman details his comprehensive regional proposal, including land and population swaps. 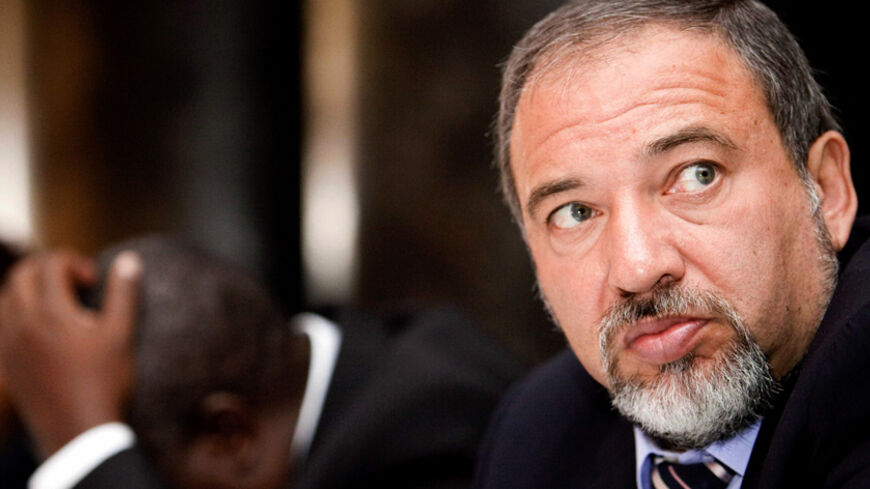 The way things looked on the morning of Dec. 2, Israel was headed toward early elections. Less than two years after its inception, Prime Minister Benjamin Netanyahu’s third government is falling apart — at the prime minister’s own initiative. The elections should be held in the spring and the fragmented, conflicted Israeli political system will try to reinvent itself. Contacts are being pursued to unite the center-left bloc, to unite the right bloc (Netanyahu and HaBayit HaYehudi leader Economy and Trade Minister Naftali Bennett, for instance), while the keys remain in the hands of Yisrael Beitenu leader Foreign Minister Avigdor Liberman. Will he join Netanyahu before or after the elections as he did in the past, or will he go for broke this time and take a quantum leap to become a major kingpin in the premiership contest?

Yvet (Liberman) is heading for the second option. On Nov. 28, he revealed his updated (peace) plan. On Dec. 3, he is scheduled to attend the Ministerial Council meeting of foreign ministers at the Organization for Security and Cooperation in Europe, where he will present his plan to anyone interested. This coming weekend, he will visit Washington, participate in the Saban Forum and meet high-level officials in the US administration. Here, too, his new diplomatic plan based on the “regional arrangement” concept will head the list of topics for discussion.

Liberman has found for himself a new niche in the crowded Israeli political field: On the one hand, belligerence against Israel’s enemies, against terror and against some of those Israeli Arabs who identify with the Palestinians, and on the other hand, he presents a daring peace plan that includes steep concessions, the establishment of a Palestinian state, conceding neighborhoods in East Jerusalem and the territorial exchange of densely populated Israeli-Arab regions. He hopes that this way, he will become the “responsible adult” and position himself to the left of Bennett and Netanyahu, but to the right of the other center parties. This is the kind of niche that generally produces Israeli prime ministers. But Liberman still bears the heavy burden of proof. Does the Israeli public view him as a legitimate candidate, despite his Russian origin and heavy Russian accent? Will his evaporating electorate (immigrants from the former Soviet Union) be replaced by native Israelis searching for a leader? We will have the answers to these questions in a few months.

Liberman’s peace plan leverages the advantage of a comprehensive regional agreement. Israel must negotiate with the entire Arab world, not only the Palestinians, and resolve the conflict “from the outside in.” Israel would be willing (in this context) for the establishment of a demilitarized Palestinian state on most of the area of Judea-Samaria. Then, to satisfy the Palestinian territorial demand (“for territory the size of the West Bank before 1967”), Liberman offers territorial exchange including population exchange. Israel would concede regions such as Wadi Ara and the Triangle in the north of Israel, populated by hundreds of thousands of Israeli Arabs who would become citizens of the Palestinian state. In exchange for these high-quality lands, Israel would be able to annex most of the settlement blocs.

Liberman is willing to relinquish Jerusalem’s Palestinian "seam neighborhoods" and evacuate his own home in the far-flung Nokdim settlement in exchange for peace. He says expressly that “when debating between the unity of the people and the unity of the land, the unity of the people is more important.” Liberman adds this time an interesting twist to his original plan (first publicized in 2004): To increase the Jewish majority in Israel he is willing to encourage Israeli Arabs from mixed cities such as Jaffa and Acre to immigrate to the Palestinian state that will rise, in exchange for economic incentives.

In an interview with Al-Monitor on Dec. 1, Liberman addressed all these issues.

Al-Monitor:  How did you come up with the regional agreement idea?

Liberman:  Everything begins with the correct diagnosis. When the diagnosis is incorrect, then the doctor gives the wrong drugs and the patient doesn’t heal; on the contrary, he can get worse and even die. To this day, we related to the Israeli-Palestinian conflict as a separate conflict between two states. In my opinion, this definition is incorrect. Our dispute is not with the Palestinians but with the Arab world. The Arab world, in this context, has three dimensions: the Arab countries, the Palestinians and the Israeli Arabs. Until now, we have tried to resolve the conflict via the Palestinians. A great many good people with excellent intentions invested their best efforts in this attempt: [former President] Shimon Peres, [late Prime Minister] Ariel Sharon, [former Prime Minister] Ehud Barak, [former Prime Minister] Ehud Olmert, [late Prime Minister] Yitzhak Rabin. There were peace conventions and peace agreements and sessions, there was the discussion in Annapolis and the Taba talks and there was Camp David and Oslo. But the conflict has not been resolved, because the diagnosis was incorrect.

Liberman:  I suggest that we take the three elements of the conflict, put them on the table together and resolve the conflict in all three issues at the same time. This must take place simultaneously.

Al-Monitor:  Why, in fact? The core issue of the conflict is the problem with the Palestinians. The moment that this is resolved, everything else will become insignificant, don’t you think?

Liberman:  I don’t believe that the Palestinian problem can be resolved separately. More than 20 years have passed since 1993, when the Oslo Accord was signed. The fact is, it hasn’t succeeded. Only the wide context of the Arab world will let us think outside the box and support the possibility of a solution. The Arab world is in a deep crisis, but every crisis also presents an opportunity.

Al-Monitor:  What do you mean?

Liberman:  This is the first time that the moderate Arab world understands and internalizes the fact that its real threat is not the Jews, not Zionism and not Israel, but the Muslim Brotherhood and Jabhat al-Nusra and Hamas and the Islamic State and al-Qaeda and all the terrorist factions of the different denominations over the generations. Therefore this is the first time that we can say to all these moderate countries, "Friends, we have a common enemy, let’s join hands and cooperate in the security realm as well as the economic realm." That will give us a tremendous diplomatic advantage because we’ll emerge from the diplomatic isolation and cease being the automatic target for condemnations and verbal attacks. We’ll stop being the punching bag of the entire world at every international forum. The security advantage means cooperation with moderate nations, exchanging intelligence, joint efforts. With regard to this facet, our partners could gain very nice inputs. And there’s also the economic sphere. I am convinced that one day, we’ll have embassies in Riyadh, in Kuwait, in the Gulf States and other places. The combination of our initiative, technology and knowledge with their tremendous financial reserves can together change the world.

Al-Monitor:  To such an extent? You are beginning to sound like Shimon Peres, but then it turns out that you invest a great deal of thought and energy in an effort to empty Israel of its Arab citizens.

Liberman:  The Israeli-Arab component is very important. We shouldn’t focus on what they give up but on what they will gain. I have no intentions of starting the negotiation through the media, but it’s clear that a good deal in which everyone gains means that each side also has to forfeit something. I think that in the situation that has been created, we have a decent chance for such a deal.

Al-Monitor:  What kind of international responses do you get? Have you discussed this proposal with your counterparts in Europe, in the United States and in the Arab world?

Liberman:  I have talked about the idea with quite a few of my colleagues in Europe and also in North America. All in all, everyone understands that this is a serious idea that can’t be dismissed just like that. It is also clear that unilateral recognition of a Palestinian state won’t lead anywhere apart from more friction and bloodshed and more tragedies. To recognize a Palestinian state and force a timetable on Israel won’t get us anywhere. It will only worsen an already bad situation.

Al-Monitor:  What indications do you get from the Arab world?

Liberman:  I assume that there, too, people understand the situation and that we have a basis for discussion.

Al-Monitor:  The opposition in Israel called your ideas for shrinking the Arab-Israeli population in Israel as “a paid transfer.” The fact that you want to concede areas in which there is a clear Arab majority and offer money to encourage the Arabs of Jaffa and Acre to leave, raises old demons.

Liberman: This criticism is irrelevant and not to the point. In our time, we asked all the Jews around the world to come here, to Israel. We told them that anyone who identifies with the ideas of Zionism and feels himself a Jew is welcome. Now what I propose is the same thing, only with regard to the Palestinians. All those who identify with Palestinian ideas and feels himself to be Palestinian is invited to move to the Palestinian country. What is so terrible about that? They fight with all their might for the establishment of this state, and don’t want to enjoy the fruits of their labors afterward? So anyone who decides to move there will get our assistance. I think that this is logical and legitimate. When we evacuated thousands of Jews in the [2005 Gaza] disengagement, we also gave them compensation. In the case of Israeli Arabs, I am talking about [economic] incentives. After all, a portion of Israeli Arabs openly and proudly declare that they are Palestinians and identify with the Palestinians and not with their own state, Israel. So please, we will help them be Palestinians and do it without coercion and in an enlightened manner.

Al-Monitor:  Are you planning on presenting your plan to the Europeans and Americans later on in the week?

Liberman:  Definitely. So far, I have not heard people condemning or disqualifying the basic idea. I also spoke to US sources, who did not disqualify the idea outright. After all, they always tell us that we only know how to say “no,” and not to propose, initiate or say “yes.” So here we have a courageous peace plan with very painful concessions. This is a constructive Israeli proposal with inner logic and chances for success, as opposed to the other utopic proposals. In Israel also, when this plan was first publicized, I didn’t hear politicians condemning it. Not [Finance Minister] Yair Lapid, not [Justice Minister] Tzipi Livni, not even [former Minister] Moshe Kahlon. I have spoken with some of them. I intend to promote this plan with all my might and if I am elected to the premiership, I will take action to implement it.