Israel defense minister: We must coordinate moves with Trump

In an exclusive interview with Al-Monitor, Defense Minister Avigdor Liberman confirmed that he still supports a two-state solution, but one involving population as well as land swaps and as one part of a regional agreement. 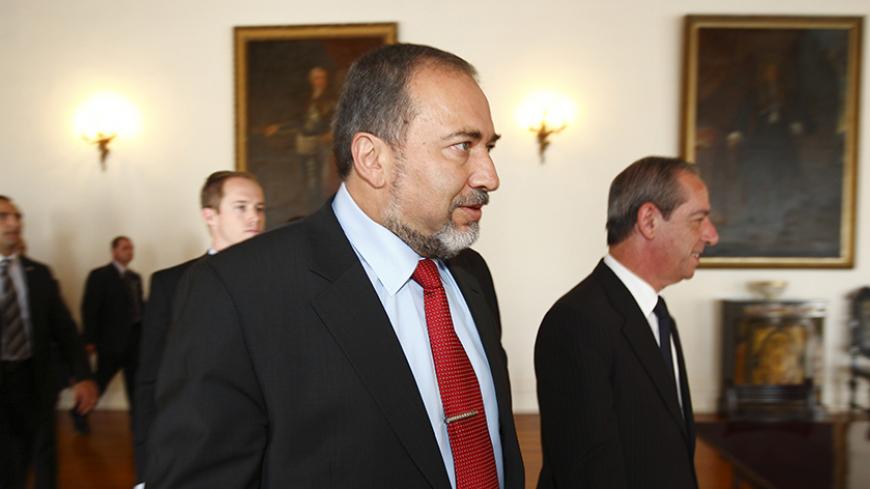 A mysterious aircraft eliminated a terrorist squad that included five Islamic State (IS) fighters just as they prepared to fire rockets from the Sinai Peninsula at Israel's southernmost city, Eilat, Feb. 19. The Sinai affiliate of IS later issued a statement placing responsibility for the action against the squad squarely on Israel.

While Israel has a long-established policy of ignoring questions about such incidents, in this case Defense Minister Avigdor Liberman announced, “Like always, the special forces of Lichtenstein probably took out a few terrorists from Daesh [IS] in Sinai. … We do not let anything go without a response. I don’t think that the Islamic State in the Sinai Peninsula poses a serious threat.”

That Liberman did not avoid indicating or deny that Israel is conducting military operations in Sinai, while the Egyptians had no comment whatsoever on the incident, is an example of the strong security cooperation between the two countries.

Al-Monitor:  At the Munich Security Conference this week, you gave a speech in which you stressed that you still support a two-state solution. This runs counter to Prime Minister Benjamin Netanyahu's position and is not completely synchronized with President [Donald] Trump's position either. How come?

Liberman:  I don’t know what anyone else's position is. All I know is my position. I haven't budged from it in close to 15 years. On this particular issue, over time I have only become more convinced of my position. As part of a two-state solution, we must establish a Jewish state, not a binational state. The model that is now on the table is based on the creation of a homogeneous Palestinian state, in which there are no Jews, alongside a binational Jewish state with [an Arab] minority making up 20% of the population. I oppose that. I support a two-state solution that includes an exchange of territories and populations rather than ceding territories for peace. The concept of territories for peace has failed.

Al-Monitor:  That is still a two-state solution, isn’t it?

Liberman:  That is true, but it is still more logical and implementable than the current plan. It makes no sense to have parliamentarians in the Israeli Knesset who boycott the funeral of Shimon Peres, but who rush to attend the memorial for Yasser Arafat the very next week. I know that most Arab Israelis are good and loyal citizens of Israel, and I believe that they should take upon themselves all of the responsibilities of Israeli citizens, including national or military service. Their problem is their extremist leadership, which even refuses to sign surplus voter agreements in the elections, even with a [left-wing] party like Meretz.

Al-Monitor:  What should a peace process look like in the current era?

Al-Monitor:  What does that mean? Who exactly will have a seat at the negotiating table?

Liberman:  Representatives of all the moderate Arab states — the Sunni axis of states who realize where the real risk to the Middle East comes from and know that it is not Israel.

Al-Monitor:  The problem with your plan for an exchange of territories and populations is that it lacks international support, nor does it have any support in the Sunni axis, so how can it work?

Liberman:  I spoke about this plan at the Munich Conference [Feb. 19]. The auditorium was packed, but no one fell out of their seats [when I presented my plan]. I didn't hear a single protest. In private talks I had later with numerous senior officials, everyone told me how much sense the plan makes. I spoke loudly and clearly, and I didn't see anyone shocked by it.

Al-Monitor:  How does your plan align with the fact that President Donald Trump has yet to formulate his own opinion as to whether he prefers a single state or a two-state solution?

Liberman:  President Trump is right. He said that he has no intention of forcing a solution on us. He said that we are big boys, and that any agreement that we reach will be acceptable to him, that he is not approaching the problem with any fixed ideas. He has no fixation on this issue, and no desire to force anything on us. In my opinion, that is the correct approach.

Liberman:  I don't know about [any such] teams. What I do know is that the people working on it are [US representative for international negotiations] Jason Greenblatt on behalf of Trump and our US ambassador, Ron Dermer. They are both religious Jews. It is impossible to describe either of them as some leftist enemy of Israel. They are both intimately familiar with the situation, both in Israel and in Judea and Samaria. We have to reach an understanding and arrangement with the Americans. What people don’t realize is that we don’t have the option of getting into a quarrel with the Trump administration. We already had eight years of quarrels and conflicts with the Obama administration. That is enough.

Al-Monitor:  Given how close Russia and the United States have become, as reflected in the relationship between Trump and Russian President Vladimir Putin, do you think there is any chance of recruiting the Russians in support of Israel's efforts to keep Iran out of Syria?

Al-Monitor:  More specifically, do you think it will be possible to get Putin to support this, particularly because he supposedly has a close relationship with Trump?

Liberman:  I don't know if we can get Putin's support. What is obvious, however, is that we cannot ignore Russia. Right now, there is a bilateral mechanism to avoid conflicts, which works pretty well. We have managed to prevent friction with the Russians, who operate in our [air] space. We are engaging them in a complex and complicated dialogue.

Al-Monitor:  Could we ask for Trump's support in this?

Liberman:  I don’t know what kind of relationship currently exists between Trump and Putin or between the United States and Russia. What I do know is that it is very important that the Americans be involved in this. As far as I know, the conflict in Syria is the first significant conflict since World War II in which the Americans are hardly involved at all. The Russians are convening a conference in Astana [Kazakhstan], the Iranians are making moves of their own and the Americans simply aren't involved in any of this. I can't recall anything like this. It is critical for the region that the United States be involved here.

Al-Monitor:  Could you say something about the rockets that IS fired at Israel last week and about reports of an Israeli attack in Sinai?

Liberman:  We are defending, and we will continue in the future to defend our citizens and our interests anytime, anywhere. Period.