Israeli Arabs take their message to the White House 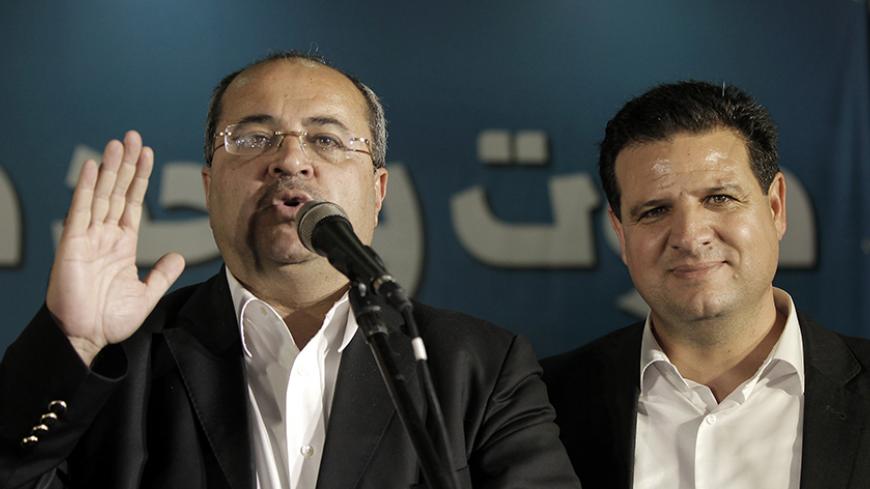 Ahmad Tibi (L) delivers a speech next to Ayman Odeh, leader of the Joint List, in Nazareth, March 17, 2015. Both Israeli Arabs were elected to the Israeli Knesset that day; the Joint List is a unified slate of predominantly Arab parties. - Getty Images/Ahmad Gharabli

Quietly and under the radar of the Israeli media, Knesset member Ahmad Tibi entered the holiest of holies of America’s most important strategic assets Feb. 4: Washington’s White House, State Department and Capitol Hill. As far as anyone can remember, no such meetings have been held in the past with such high echelons and such levels of intimacy between American administration sources and an Israeli Arab Knesset member. Tibi’s international status, his popularity in the Israeli Arab community and the conspicuous estrangement between the White House and Prime Minister Benjamin Netanyahu’s office were probably among the factors that contributed to the setting up of the meetings.

Tibi talked to his American interlocutors about the situation of Israeli Arabs, who constitute a minority of about 20% of the country’s population, and strongly condemned the policies of the Netanyahu government, which he called “Israel’s most extremist government of all times, to the extent that the most moderate person in it is Netanyahu himself.”

After Israel’s last elections in March 2015, the Obama administration (and President Barack Obama himself) strongly criticized Netanyahu’s racist statements toward the Arab public (“Arab voters are heading to the polling stations in droves”). Netanyahu was quick to apologize, but the Americans emphasized that such statements are likely to influence their policy. Now, it seems, they are making good on their promise by inviting Tibi, one of Netanyahu’s most scathing critics, to talks in the White House. And this is taking place while discussions between Israel and the United States regarding the signing of a memorandum of understanding regarding a military aid package to Israel for the next decade are stalled.

Tibi agreed to give Al-Monitor a telephone interview from Washington. His American journey lasted more than a week. In the White House, Tibi met with Robert Malley, Obama's point man on the Middle East, and Malley’s staff. At the State Department, he met with Frank Lowenstein, the department's special envoy for Israeli-Palestinian negotiations, and also with Christopher Henzel, director of the Office of Israel and Palestinian Affairs. Finally, Tibi met with several top legislators on Capitol Hill.

Tibi also held meetings and delivered lectures in research institutes, such as the Washington Institute. He met Jewish leaders as well, such as Jeremy Ben-Ami from J Street, before returning to Israel this week. Al-Monitor was informed that Tibi’s meeting with the State Department was also attended by members of the team that is composing the yearly State Department report on human rights. Tibi hopes that the report will take his incisive words into account and will level criticism against Israel. For Tibi, that will be a great victory. For Netanyahu, that would be the least of his troubles. What Netanyahu really wants, at this point in time, is to somehow survive the following 11 months in one piece — with a wing and a prayer for the victory of a Republican candidate in the US presidential election in November.

Al-Monitor:  What was the purpose of these meetings?

Tibi:  To bring the voice of the discriminated-against Arab minority to Washington. I have been working in the international arena on this issue for several years. I was in the European Union, I met with the UN secretary-general, I visited universities in the US and quite a number of research institutes. I am happy that, now, the administration itself agreed to hear about the situation firsthand and invited an Israeli Arab Knesset member from the Joint List.

Al-Monitor:  The average Israeli would expect that at such a meeting you would praise the fact that Israeli Arabs are far better off than all the other Arabs of the Middle East, excluding the oil-rich Emirates of course. They enjoy equal rights, a high standard of living, a modern economy and security. How do you perceive this?

Tibi:  That is a racist viewpoint. My point of reference is not the Arabs in the Middle East, but the residents of the state in which I live, in other words, the Jews in Israel. I talked about the problems we have in planning and construction, lack of infrastructure, no land allotments, [no] industrial zones, systematic destruction of homes and mainly the problematic 'commander spirit' of Prime Minister Netanyahu [the atmosphere he creates], including his public statements that support the demolition of houses. Only 10 days ago a house was demolished in my hometown of Taibe, and all our attempts to have this house included within the new planning program came to naught. According to the report of the legal adviser to the government [attorney general], there are 50,000 houses built in Israel without permits, in other words one out of every five homes. They’ll destroy all these?! I also told the Americans about the intention to destroy a Bedouin locality named Umm al-Hiran and build, in its stead, an Israeli locality by the name of Hiran.

Al-Monitor:  Did you also tell them about the government’s program of investing 15 billion shekels ($3.8 billion) in the Arab sector in order to close the gaps?

Tibi:  No. When I see the money, then we’ll talk. That is a fictitious sum, and no government official knows if this money really exists.

Al-Monitor:  Did you get the impression that the Americans are concerned about the Arab minority in Israel?

Tibi:  Yes, very worried. One of the members of Congress couldn’t believe that they are demolishing a Bedouin locality and constructing a Jewish one instead by the same name. He wondered out loud, why they couldn’t construct one village in which Bedouins and Jews would live together. I told him that this possibility arose and was rejected by the government. To the Americans, who have turned equality into an important symbol, it is hard to understand this. I said that we are 20% of the Israeli population but only 8% are employed in the public service. There are usually no Arabs in the Bank of Israel, maximum one or two, out of 900 workers. Can the Americans imagine that no African-Americans would be employed in their central bank? There is a government decision regarding a 10% [quota for Arab] employees in the public service, but this is simply not carried out.

Al-Monitor:  Did you focus on these socio-economic issues?

Tibi:  Yes, including the employment of Arab women, the fact that there are no industrial zones in the Arab sector, the racist legislation in the Knesset. There is already a list of 40 laws that discriminate against Arabs, either directly or indirectly. The people I spoke to asked for this list of laws and received it. In the educational system, the Arab pupil receives a ninth of what the Jewish child receives. Sixty percent of Arab children are below the poverty line. The Arabs and ultra-Orthodox Jews are the weakest sectors of Israeli society, and I spoke about this at length. In addition, ever since the elections [March 2015], we are witness to an incitement campaign waged by Netanyahu personally against the Arab minority. It began with his statement on Election Day [about the Arabs coming in droves to the polls] and continued after the terror attack in Tel Aviv [Jan. 2] when he went to the site and spoke against the Arab population and [Arab] Knesset members. He simply embraced [Yisrael Beitenu leader] Avigdor Liberman’s ticket, and when a prime minister adopts such a message, that is very dangerous.

Al-Monitor:  So you were in the White House and the State Department, and you didn’t even talk about the diplomatic issue [i.e., a diplomatic Israeli-Palestinian arrangement]? This says all there is to say about the current state of affairs, no?

Tibi:  The diplomatic issue arose. I explained to my interlocutors in the White House that there will never be a diplomatic arrangement with Benjamin Netanyahu. Never. An Israeli government that wasn’t able to reach an agreement with President Mahmoud Abbas, who is the most pragmatic leader ever, is a government that won’t reach an agreement with any Palestinian leader. They simply don’t want a Palestinian state alongside the State of Israel.

Al-Monitor:  The Americans know the truth. As revealed here in Al-Monitor, they submitted to ‘Abbas the pragmatist’ a draft of a framework agreement on March 17 [2014], at a meeting in the White House. The draft even included Jerusalem as the capital of the two states. Abbas never returned with an answer to this very day. In all the opportunities he was given, Abbas ran away. I think that they know this in the White House, too, don't you think so?

Al-Monitor:  After the elections, he recanted his words and renewed his commitment to the two-state solution. What do you think this meant?

Tibi:  I told the Americans that the real Bibi is the one from before the elections, not after them.

Al-Monitor:  Do they have a clue as to what they’ll do in the next 11 months left to this administration?

Tibi:  They are pondering their options. In my assessment, they understand that there is not much to do. I told them that I don’t know of any idea that could jump-start the process with the current government, the most extreme government ever. Abbas is committed to a two-state solution, Netanyahu is committed to political survival.