Arab MK: Israel must 'pay a price' for occupation

Israeli Knesset member Ahmad Tibi believes that the two-state solution remains the best possibility for resolving the Palestinian-Israeli conflict despite waning enthusiasm for it. 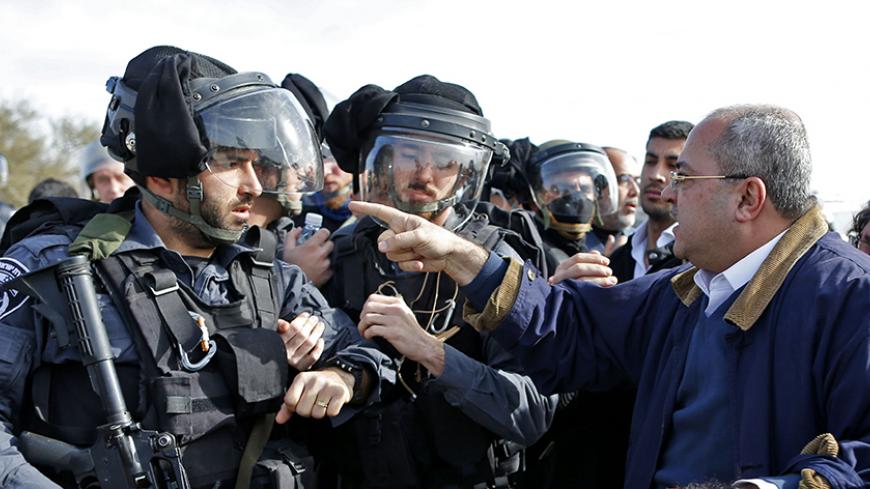 Palestinian Knesset member Ahmad Tibi (R) confronts an Israeli policeman during clashes with Bedouin protesters in the village of Umm al-Hiran, near the southern city of Beersheba, in the Negev Desert, Jan. 18, 2017. - AFP / AHMAD GHARABLI

Shortly after the Feb. 7 press conference between Israeli Prime Minister Benjamin Netanyahu and US President Donald Trump, Tibi succeeded in grabbing the headlines. Commenting on Trump's assertion that he was equally open to a two-state solution or a one-state solution, whichever the two conflicting parties preferred, Tibi told CNN Feb. 16 that in the case of a single state, “I will be running for the post of prime minister, and I can assure you that I will win [over] Bibi Netanyahu.”

Tibi spoke to Al-Monitor in the Jordanian capital after a public gathering at the Orthodox Club, where he delivered a speech as the guest of the Asriyya Forum, founded and led by Asaad Abdel Rahman, a member of the PLO's Executive Committee. Tibi said that the one-state solution is far-fetched. “Until today, polls show that the majority of Palestinians still favor a two-state solution,” he said. A December 2016 poll by the Palestinian Center for Policy and Survey Research and the Tami Steinmetz Center for Peace Research confirm his assertion.

According to Tibi, there are only three possible solutions to the Palestinian-Israeli conflict: two independent and sovereign states; a one-state solution with an apartheid-like structure and political discrimination against Palestinians; or a one-state solution where all citizens have equal rights. Tibi added, however, “Israelis will not agree to a single state for all, and are unlikely to tolerate a blatant apartheid regime, so the only viable and practical option is the two-state solution.”

That said, he also observed that every Israeli leader who has been asked to choose between a two-state solution and a one-state solution has chosen a third option, namely, maintaining the status quo.

On the other hand, Tibi said, although Netanyahu pays lip service to the two-state solution, he never says that it will be independent. “He wants the Palestinian state with security in Israeli hands, and Israel controlling the Jordan Valley and other strategic locations,” Tibi said. “Netanyahu has never used the words ‘independent’ or ‘sovereign’ when talking about the Palestinian state.”

Tibi explained that Israel has three legal structures, stating, “One is truly democratic and applies to Israeli Jews, one is discriminatory toward Palestinian citizens of Israel and a third is a military legal structure for Palestinians in the West Bank and Gaza.”

Describing the current Israeli government in his speech, Tibi noted that it is the most right-wing government in the history of Israel, saying, “When Netanyahu is the most moderate member of the Cabinet, you can gauge how extreme it is.” Tibi added that not a single member of Netanyahu's government supports a two-state solution.

As for getting past the present stalemate, Tibi explained that Israel has to be made to pay a price for its policies. “At present, not only is the occupation without cost, but in fact it is making a profit,” he told Al-Monitor. Israel is making millions from farming settlements in the Jordan Valley alone, he said.

Tibi also expressed his views on the need to end the internal Palestinian split, and called on Arab leaders, scheduled to meet in Jordan March 29 for the annual Arab League summit, to show clear and strong solidarity with the Palestinian people. “The split is exacerbating Israeli arrogance and lack of interest in a solution,” Tibi claimed. “It must end.”

In concluding his discussion with Al-Monitor, Tibi said he is a strong proponent of nonviolent resistance as a means of bringing about change. “Nonviolent actions, like the Boycott, Divestment and Sanctions, are effective and efficient means of changing the current balance of forces,” he said, adding that he does not think that Palestinians have effectively implemented nonviolent methods in the occupied territories.

It is highly unlikely that when Trump expressed his indifference toward the two-state solution that he had any idea what that actually meant. When Abbas meets the US president in Washington in April, he is likely to ask Trump what he envisions in regard to a one-state solution. If Trump’s idea is similar to that of right-wing Israelis, then the result would be a more formal version of apartheid.

As the majority of Palestinians and Israelis continue to believe in the two-state solution, it appears to be imperative to look past the current distraction and insist on the need for the creation of an independent Palestinian state alongside Israel.