Was Abbas' endorsement of one-state solution plea or ploy?

Palestinian President Mahmoud Abbas ended his UN speech with an assurance that the "inevitable" freedom coming for Palestinians may take the form of a single-state solution. 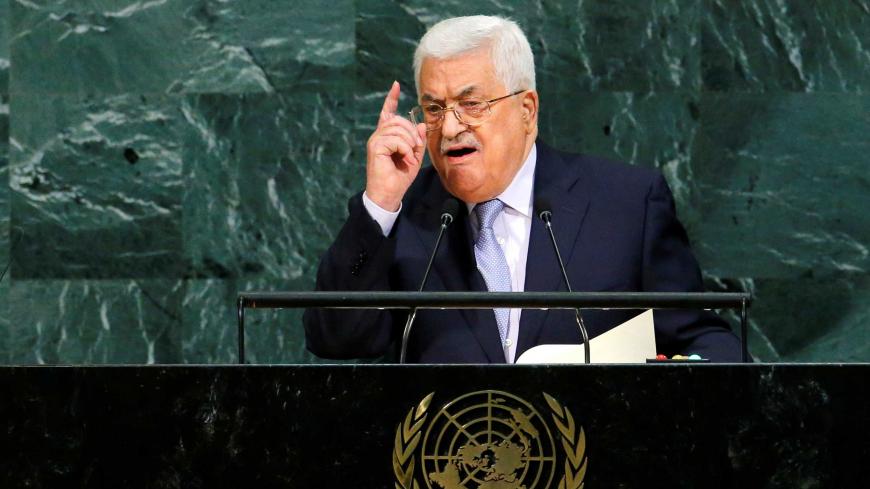 Palestinian President Mahmoud Abbas’ concluding sentence in his Sept. 20 UN speech has validated the desire of many young Palestinians to seek equal rights in a single binational state.

The 82-year-old Palestinian leader, making what was perhaps his last speech to the UN General Assembly, surprised many by saying that if Israelis continue to put obstacles in the way of a two-state solution, other options do exist. “Freedom is coming and is inevitable, and that occupation shall come to an end. It will either be the independence of the State of Palestine, living side by side in peace and security with the State of Israel on the 1967 borders, or equal rights for all of the inhabitants of the land of historic Palestine from the river to the sea,” Abbas said in his UN address.

Abbas’ suggestion that Palestinians might opt for a binational state comes as Palestinian youths are increasingly losing hope and support for the two-state solution and preferring to struggle for equal rights in a single country. A report published June 28 by the Carnegie Endowment for International Peace, “Revitalizing Palestinian Nationalism: Options Versus Realities,” examines some alternatives.

The report provides evidence for many Palestinians supporting “binationalism” as the most repeated alternative to the two-state solution, even while admitting its ultimate weakness. “Public support for binational proposals, in which Palestinians and Israelis would share a single state, remains relatively low; and advocates have yet to articulate a viable strategy to achieve that vision. However, given the emerging Palestinian demographic majority between the Jordan River and the Mediterranean Sea, binational options may become more appealing in the years ahead,” the report stated.

Perry Cammack, one of the report’s authors and a former policy aide for President Barack Obama, told Al-Monitor that the study and its content show the nuances and complications of the Palestinian approaches to solving the conflict. Cammack, who spoke to Al-Monitor a week before Abbas’ speech, probably didn’t expect some of the ideas articulated by Palestinians in their report to take center stage. Cammack said that the alternative ideas of Palestinians reflected in the Carnegie report “have often been at the fringe and none enjoys nor is likely to enjoy the full backing of the Ramallah-based leadership.”

Hard-core Palestinian supporters of the one-state solution, however, haven’t been very excited by the words of the Palestinian leader. Mohammad al-Helu, an activist from Nablus with the Popular Movement for One Secular Democratic State, told Al-Monitor that Abbas’ reference was nothing more than a tactic to force Israelis and the United States back to the two-state solution. “This is a cheap tactic and not the first time that Abbas uses this language of waving the flag of the one-state [solution] as an alternative if the Israelis remain intransigent.”

The Popular Movement for One Secular Democratic State calls for the establishment of “an international solidarity movement, composed of individuals and organizations, to organize and spearhead efforts to realize the objectives of one democratic state in Mandate Palestine.”

Helu noted that activists have been calling for a single secular democratic state for some time, pointing to the November 2013 Munich Declaration as an example. “We have been calling for this since 2003. The two-state solution is a racist and unethical plan that doesn’t provide any solutions to Palestinians in Jerusalem and the diaspora. It is neither just nor is it a lasting plan,” he told Al-Monitor by phone from Ramallah.

Awad, executive director of the Holy Land Trust in Bethlehem, told Al-Monitor that a two-state solution would likely not be democratic, as it would entail Israelis and the United States giving far greater priority to security over democracy. “I prefer to fight for equal rights in a single state that might be an apartheid state initially rather than be part of an undemocratic two-state solution,” Awad told Al-Monitor.

With the exception of a few prominent Palestinian intellectuals, like Islamic studies and philosophy professor Sari Nusseibeh of Al-Quds University, the idea of a one-state solution has been largely articulated by intellectuals outside of the region. David Remnick, the editor of The New Yorker, lists in a November 2014 article some of those who have espoused the one-state solution. “The one-state idea has been boosted over the years by academics such as Edward Said, Tony Judt, John Mearsheimer and Virginia Tilley, and by activists such as Ali Abunimah, the Palestinian-American co-founder of a website called Electronic Intifada.'”

Ironically, the idea of a single state was the bedrock of the ideology of the PLO. Hussam Mohamad, a professor of international relations at Eastern Mediterranean University in Cyprus, wrote in 1997 of the Palestinian strategy over the years: “On a general level, PLO military strategy and political thought can be divided into three phases: the total liberation phase (1964-1968); the secular democratic state phase (1969-1974); and the two-state solution (1974-1990s).”

It is not clear if Abbas' words reflect a strategic shift in Palestinian policy or a tactic to goad Israelis and the United States into backing the two-state solution. Regardless of the motivation, his reference to the concept has legitimized many who feared that talking about it will be seen as unpatriotic to the national idea of an independent Palestinian state alongside Israel.