Now that demography indicates a Palestinian majority between the Mediterranean Sea and the Jordan River, a one-state solution could replace the vision of an independent Palestinian state. 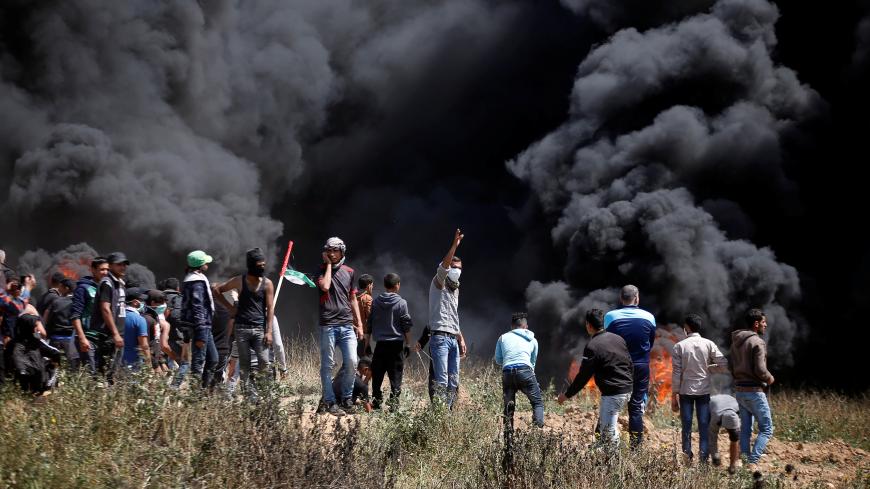 Palestinian demonstrators gather at the Israel-Gaza border during clashes with Israeli troops at a protest demanding the right to return to their homeland, east of Gaza City, Gaza Strip, April 6, 2018. - REUTERS/Mohammed Salem

A representative of the Israeli Civil Administration recently presented the Knesset with demography statistics that indicate there are more Palestinians than Jews (by a very small margin) between the Mediterranean Sea and the Dead Sea. The numbers presented March 26 stipulate that 6.8 million Palestinians and 6.5 million Israelis live on these lands. Now that these numbers were recognized by Israel, the option of a so-called one-state solution is gaining momentum in the Palestinian Authority (PA).

A senior PLO official, close to President Mahmoud Abbas, told Al-Monitor that for the foreseeable future, the two-state solution is off the table for several reasons. The first is that under Prime Minister Benjamin Netanyahu, Israel is piloted by the settler movement. And even after the Netanyahu-era, the settlers (half a million voters) will be part of the governing majority. In addition, the Palestinians consider the US administration’s eventual peace proposal an insult, as it would offer the Palestinians independent cantons at best.

Another reason behind the despair over the two-state solution is that the European Union is currently weaker and more isolated regarding a regional peace process. Russia, on the other hand, has never been interested in taking the lead on a Palestinian state.

Viewing these reasons, the source, together with other veteran PLO seniors, concluded that the Palestinian leadership must espouse a proactive strategy of one state for two peoples. Of course, it should not be an apartheid state, but a state with equal rights, socially and politically, for all Palestinians in the West Bank and East Jerusalem.

A one-state strategy, he said, should include the following elements: canceling the Oslo Accord, dismantling the PA, moving Palestinian and PLO headquarters to Cairo, and dismantling all Palestinian security forces apart from the local police.

He argued that the PLO should adopt a new strategic decision, a milestone in Palestinian history, demanding the United Nations and the international community support equal civil and political rights for all Palestinians residing in Israel, the West Bank, Gaza Strip and East Jerusalem

A first step for such a strategic decision would be a resolution adopted by the Arab League. The Arab states — namely Egypt, Saudi Arabia and Jordan — would then approach the EU, Russia and China to propose a resolution both at the UN General Assembly and at the Security Council demanding Israel to grant civil and political rights, including the right to vote and get elected. This resolution proposal would demand that in case of an Israeli refusal, economic sanctions would be placed on Israel. Also, the whole economic burden of the social and economic needs of the Palestinians of the West Bank would fall on Israel.

For these moves to work, Hamas will be asked by Egypt to join this one-state strategy. The PLO for its part will begin to organize a new political party system in order to run in the future in the Israeli (Palestinian) parliament and government.

The senior PLO official was dead serious on these propositions, which he has discreetly discussed with elements in Amman and Cairo.

When asked about a timeline to such a strategy, he said that it would begin the moment Abbas resigns. He noted that by 2025, there could be a Palestinian president in Jerusalem.

A senior Israeli Ministry of Foreign Affairs official said that such a scenario is not realistic, as Israel is convinced that neither Fatah nor Hamas will ever agree to give up their hold on power. Furthermore, the United States would veto any such resolution at the UN. The alternative, he said, according to Netanyahu, is Israel alongside a Palestinian state with limited territory and sovereignty.

He, for now, is not concerned with this binational state scenario.