Jordanian Prime Minister Omar Razzaz has said in a recent interview that a one-state solution to the Israeli-Palestinian conflict could be an alternative, causing uproar among Jordanians. 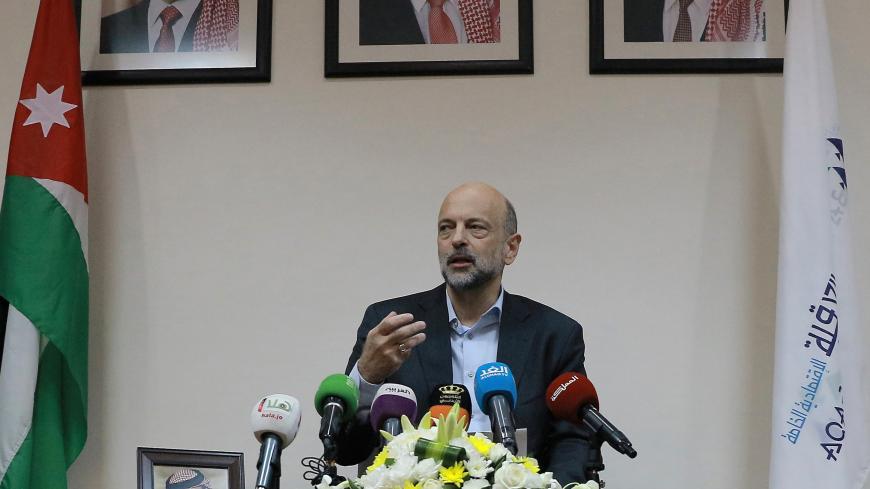 Jordan's Prime Minister Omar Razzaz gives a press conference in the southern port city of Aqaba on July 23, 2019, discussing projects in the area including an underwater military museum. - KHALIL MAZRAAWI/AFP via Getty Images

Jordanian Prime Minister Omar Razzaz's comments to a British newspaper that the Hashemite Kingdom could view positively a “one-state democratic solution” to the Israel-Palestine dispute has created a stir at home, raising questions on whether the kingdom was abandoning its decadeslong commitment to the two-state solution as the only path to ending the conflict. British newspaper The Guardian quoted Razzaz in an interview published July 21 as saying that “Jordan could view favorably the creation of a single Palestinian-Israeli state, provided it gave equal rights to both peoples.”

“You close the door to the two-state solution; I could very well look at this positively if we’re clearly opening the door to a one-state democratic solution,” Razzaz said. But he added that he was ready to “challenge anybody from Israel to say yes, let’s end the two-state solution, it’s not viable. But let’s work together on a one-state democratic solution. But closing one and wishful thinking about the other is just self-deception.”

Razzaz also said Israel’s annexation policy would be “ushering in a new apartheid state” that could be a radicalizing force and could further destabilize the region.

Razzaz’s comments have raised eyebrows among Jordanian pundits. Jordanian columnists noticeably avoided commenting on the topic in the local press. An abridged version of the interview was released by the official news agency, Petra, on July 22 that did not mention his approval of the single state as an alternative to the two-state solution. “Anything short of a viable two-state solution is going to push not just Jordan, not just Palestine, not just Israel, but the region and the world into chaos,” Razzaz was quoted as saying.

“We are against unilateral actions and the annexation plan,” Petra quoted Razzaz as saying, adding that Jordan also opposes any steps that do not lead to the envisioned two-state solution, according to the agency. He said the kingdom will not accept the transfer of Palestinians, nor will it be an alternative homeland [to the Palestinians], underscoring that Jordan will not give up its custodianship over Islamic and Christian holy sites in Jerusalem. “These three are clear for us,” he was quoted as saying.

The official version of the interview was perceived as an attempt to deflect attention from the controversial comments on the single state. The initial comments had triggered an uproar on social media as activists wondered if Razzaz was testing reactions to a possible shift in policy.

But the pandemonium quieted down just as it started when, on July 22, King Abdullah flew to Abu Dhabi to meet with Crown Prince Sheikh Mohamed bin Zayed Al Nahyan to discuss bilateral ties, according to The Jordan Times. The paper said “the king reaffirmed that the two-state solution is the only way to end the Palestinian-Israeli conflict and achieve just and comprehensive peace, leading to the establishment of an independent, sovereign and viable Palestinian state on the June 4, 1967, lines with East Jerusalem as its capital.”

But in an interview with National Public Radio aired July 23, Razzaz once more alluded to the single state when he said, “If the two-state solution becomes not viable because of this annexation, then my question is what is the alternative? What is the other option to the Israelis? Is it — are they thinking of a one-state democracy for two people? Or is it going to be a state of apartheid, which the world was glad to not have in its membership since the end of the South African apartheid state.” He added, “And by undermining the two-state solution, we need to know what is the plan that does not undermine long-term peace and stability in the region? And I don't think there is one.”

The idea of a single democratic state had been proposed by the Palestinians and left-wing Israelis at one stage or another in the past five decades. Opponents of Israeli Prime Minister Benjamin Netanyahu’s proposed annexation have recently revived it as an inevitable outcome. But Jordan’s position has been solidly behind the classic two-state solution.

The head of Al-Quds Center for Political Studies Oraib al-Rintawi believes Razzaz was testing the waters by speaking positively about a single democratic state. He told Al-Monitor the public no longer believes the two-state solution is viable. “It’s behind us, and if the demand for an independent Palestinian state has been crushed by Israeli settlements and apartheid, then what is the alternative?” he said.

Rintawi believes Razzaz’s comments aimed to underline the fact that the majority of Israelis do not support the creation of a Palestinian state, nor do they accept a single state with equal rights, which means Israel is heading toward an apartheid system. “For the Palestinians, the struggle will shift from demanding a state of their own to resisting apartheid and eventually to calling for equal rights in a single state,” he said. “Razzaz’s comments could have been a slip of the tongue or a test balloon, but in any case, we have to be ready for the worst,” he concluded.

For some Jordanians, Razzaz’s comments were not only controversial but were tantamount to heresy. The largest bloc in the Jordanian parliament, Al-Islah, issued a statement July 23 calling for the dismissal of the prime minister who “has irresponsibly departed from the Jordanian, Islamic and nationalist stand … by giving legitimacy to the occupier and recognizing their right to exist in Palestine through the single state that equates between the occupier and the people who have the legal right to the land.”

Political science professor at the University of Jordan Hassan Barari told Al-Monitor he was not sure if Razzaz was speaking as a political analyst or as a prime minister who should have offered policy statements rather than hint at a shift in Jordan’s position. “The single democratic state is no option. It is a romantic dream that ignores the true mentality of Israeli leaders regardless of their political differences,” he said.

“The single state option will destroy the goal of a pure Jewish state, so it will not be accepted. We should use that as leverage to force the two-state solution,” Barari concluded.