Frustrated at the lack of progress, Palestinians of various backgrounds have joined to create a movement that explicitly calls for a single democratic state in historic Palestine. 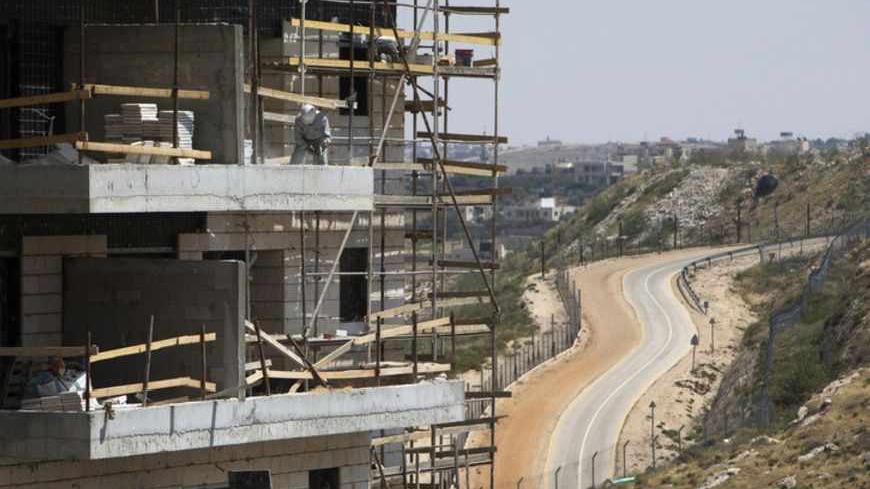 A laborer works on a construction site in a Jewish settlement near Jerusalem known to Israelis as Har Homa and to Palestinians as Jabal Abu Ghneim, May 7, 2013. - REUTERS/Ronen Zvulun

The political stalemate in Palestine and Israel over the two-state solution has finally provoked Palestinians from the occupied territories to declare a strategic change in direction of the one-state solution.

Palestinian activists from different political persuasions and careers paths have made a declaration for a democratic state for all its citizens on the 65th anniversary of the Nakba. One of the founders of the new Popular Movement for One Democratic State, a veteran leader of Fatah, said that it is much different than the PLO’s call for a secular democratic state which Israel has often attacked as an attempt to negate the existence of Israel and the Jewish people.

In an exclusive interview with Al-Monitor, Radi Jarai said that this democratic movement has absolutely no limitations on its citizens between Jews and Palestinians. “We will respect the Israel law of return 1951 and will also defend the Palestinians’ right of return.” Jarai, who spent years in an Israel prison, said that the democratic state that he and his friends are calling for can be “a refuge for Jews and Palestinians.”

Jarai said that without such a one-state idea, born of the deadlock in the political process, Palestinians are bound to continue to live in an apartheid situation for years to come: “Look around, there are racist laws for Arabs and Jews, subsidizing settlements for Jews and separate roads.”

Jarai said that he and a group of Palestinians met on May 15 and signed a founding declaration that they plan to reprint in Arabic, Hebrew and English and possibly in Russian to encourage all people to join their popular movement. When asked how he responds to Israelis who are ideological Zionists, and want a state as Jewish as France is French and Britain is British, Jarai said: “We want a state for its citizens and we refuse to negate any group based on ethnicity, race or religion.” Jarai said that a group supporting his movement already exists in Jaffa and Haifa in Israel. A conference held last year in Haifa was host ro more than 300 supporters of the one state idea, he said.

Jarai conceded that his group’s idea is not unique or new. He notes that his group is in touch with an overseas group called One Democratic State. He also is very respectful of Palestinian professor Sari Nusseibeh, whose attempts at speaking on the issue of one state resulted in physical abuse from students at Birzeit University in the 1980s. “We respect Sari and he is a good friend and an inspiration, but when he talked about his idea he was ahead of his time.”

The former prisoner, who is fluent in Hebrew, insists that he wants the movement to be popular and non-elitist. ”We want to print tens of thousands of copies of our platform and distribute them very widely,” he said in a telephone interview from his Ramallah home. “We also want to establish a radio station that can communicate in both Hebrew and Arabic and maybe in the future we can also set up a satellite station.”

The one-state concept has been discussed in various forums around the world, but Jarai insisted that his group’s movement is not looking at the idea as a tactic. “The democratic state movement is a strategic plan that we intend to stay committed to, even if the two-state solution is enacted tomorrow,” he said.

Jarai was careful when questioned on his thoughts about Jewish settlements in the West Bank. “While we believe that they are not legitimate, we differentiate between those houses built on lands that were properly purchased and those who live on land that was confiscated.”

Jarai said that even for some of the settlements built on confiscated private or public lands an arrangement can be found that doesn’t necessarily require the evacuation of their inhabitants or their demolition. The key in his argument was that Palestinian Arabs and Israeli Jews should have equal opportunities to buy and build wherever they want in historical Palestine.

Daoud Kuttab is a contributing writer for Al-Monitor's Palestine Pulse. A Palestinian journalist and media activist, he is a former Ferris Professor of journalism at Princeton University and is director-general of Community Media Network, a not-for-profit organization dedicated to advancing independent media in the Arab region. On Twitter: @daoudkuttab.