Jewish Democrats warn that the Israeli right's push for a one-state solution risks endangering bipartisan support for the Jewish state. 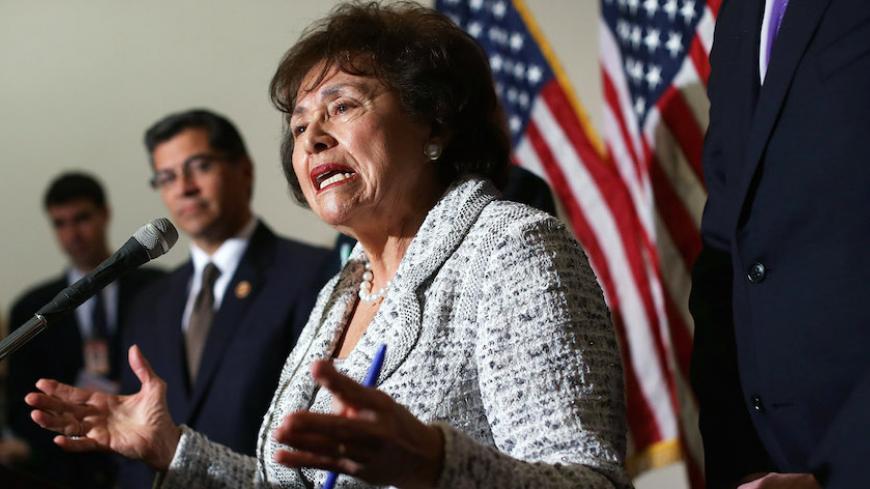 Jewish lawmakers in Congress ripped into President Donald Trump on Feb. 15 for abandoning the United States' longstanding commitment to a Palestinian state, warning that doing so would have dire consequences for Israel.

Trump floated other options to the decadeslong conflict at a White House news conference with Israeli Prime Minister Benjamin Netanyahu. The US president wasn't advocating for an alternative course of action, indicating instead that he was keeping an open mind on the issue.

Still, the comments drew angry rebukes from Jewish Democrats who warned that Trump's comments put Israel's democratic future — and historic bipartisan US support for the Jewish state — at risk. The Israeli right wing is increasingly vocal in its desire to annex all of the West Bank, where Arabs substantially outnumber Jews.

"A two-state solution for Israelis and Palestinians is the only means to ensure Israel’s long-term security and enable Palestinian aspirations for their own state," she said in a statement Feb. 15. "That is why presidents from both parties, the vast majorities of the House and Senate, and the American people have consistently supported this objective, and why President Trump must as well."

”The alternatives to a two-state solution would mean that Israel would have to choose between its commitment to democracy and the solemn obligation to be a homeland for the Jewish people,” he said in a statement. “The parties must come back to the negotiating table to find a mutually agreed-upon solution.”

"The goal of this process must continue to be two states for two peoples living side by side in peace and security — a Jewish democratic state of Israel and a demilitarized Palestinian state," he said in a statement.

Rep. Jerrold Nadler, D-N.Y., told Al-Monitor that Trump "doesn't really understand the issues." Earlier in the day Nadler tweeted out an April 2015 letter from Netanyahu in which the prime minister wrote him that he remained "committed to a sustainable two-state solution."

"Certain things are very clear. You have to have a two-state solution, because you're going to get no other solution," Nadler said. "A one-state solution just means you're going to try to impose your will on the Palestinians, and that's a formula for war eventually, or you have a binational state, which has never worked in the Middle East, which is never going to work, and the dream of Zionism for 2,000 years for a Jewish state goes up in smoke."

Nadler said the Trump administration doesn't have any experienced Middle East negotiators on its team and appears to be wasting time by considering a multitude of options that will eventually get whittled down to the usual choices. Others, however, suggested that merely broaching alternative paths forward was counterproductive.

"By casually and flippantly suggesting the United States may pursue a two-state, one-state, or some other path to ending this conflict, President Trump makes the pursuit of a solution more difficult, and ultimately puts the long-term security of Israel at risk," Rep. Brad Schneider, D-Ill., said in a statement.

Rep. Brad Sherman, D-Calif., a senior member of the House Foreign Affairs Committee, said his fellow Jewish colleagues' comments should send a clear message to Israel that toying with the notion of a one-state solution carries a cost.

*Editor's note: This article has been updated since its initial publication.