House Speaker Nancy Pelosi, D-Calif., is leading a congressional delegation to Israel this week amid an intraparty debate over conditioning military aid to the close US ally and Democratic efforts to limit President Donald Trump’s ability to attack Iran. 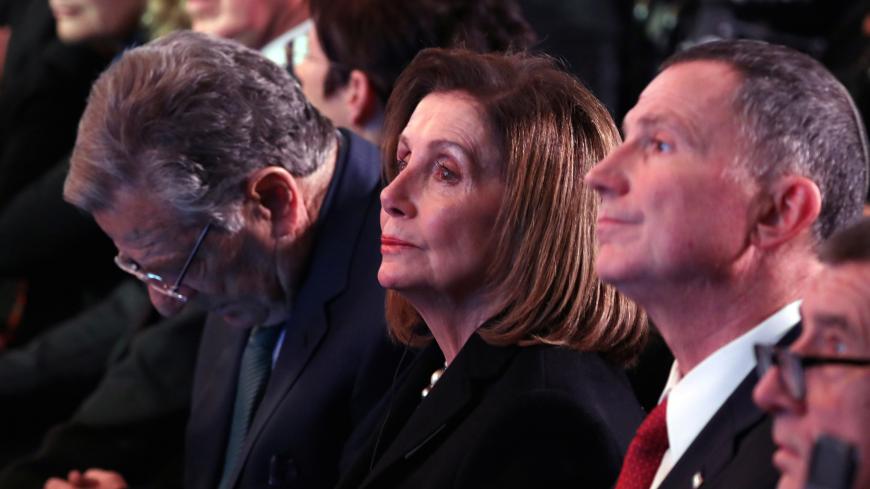 US Speaker of the House Nancy Pelosi during the Fifth World Holocaust Forum at the Yad Vashem Holocaust Remembrance Center in Jerusalem, Jan. 23, 2020. - Abir Sultan/Pool via REUTERS

House Speaker Nancy Pelosi, D-Calif., is leading a congressional delegation to Israel this week amid an intraparty debate over conditioning military aid to the close US ally and Democratic efforts to limit President Donald Trump’s ability to attack Iran.

“And no matter what our party — or wherever we are within our party — the fact that we have the shared values with Israel and that is one reason for our joy in the creation of Israel as a historical miracle, the greatest accomplishment of the [20th] century,” Pelosi said at a working lunch with Knesset members.

Pelosi also singled out Tehran despite holding a vote earlier this month on legislation intended to limit Trump’s ability to strike Iran, which the House passed 224-194 largely along partisan lines.

Why it matters: Still, Pelosi’s delegation comes as a growing number of Democratic lawmakers, presidential candidates and left-leaning advocacy groups call for the United States to condition military aid to Israel over its occupation of the West Bank.

Sen. Elizabeth Warren, D-Mass., and former Mayor Pete Buttigieg of South Bend, Indiana, have both followed the liberal lobbying group J Street’s lead and said that US taxpayers will not “foot the bill” for any Israeli annexation of the West Bank. Sen. Bernie Sanders, I-Vt., has gone further and wants to tie Israeli aid to human rights conditions in Gaza as well. Former Vice President Joe Biden has said conditioning Israeli aid would be “absolutely outrageous.”

Al-Monitor first reported last month that Rep. Ro Khanna, D-Calif., is gathering signatures on a J Street-backed letter asking Secretary of State Mike Pompeo to clarify whether Israel has used US military equipment while demolishing Palestinian homes in the West Bank. The letter notes that the Arms Export Control Act places conditions on how military aid recipients can use US equipment.

But three members of Pelosi’s delegation pushed back against the growing pro-Palestinian branch of the party by amending a J Street-backed resolution last month that reaffirmed lawmakers’ support for a two-state solution to the conflict. The three members — Deutch, Wasserman Schultz and Schneider — only came onboard the symbolic resolution after amending it with language supporting Israel’s annual $3.8 billion in military aid.

What’s next: Vice President Mike Pence also met with Israeli Prime Minister Benjamin Netanyahu at the US Embassy in Jerusalem today, where he reportedly invited the embattled Israeli premier and opposition leader Benny Gantz to Washington next week for an update on the Trump administration’s long-stalled peace plan. The visit will reportedly take place Jan. 28 — the same day the Knesset has scheduled a vote on establishing a committee to examine Netanyahu’s request for parliamentary immunity from corruption charges.

Know more: For more on the brewing Israel debate among Democrats, read congressional correspondent Bryant Harris’ inside story on the House vote last month to endorse Israeli military aid alongside a two-state solution.