Presidential candidates who want to place conditions on Israeli military aid have prompted pro-Israel House Democrats to go on the offensive. 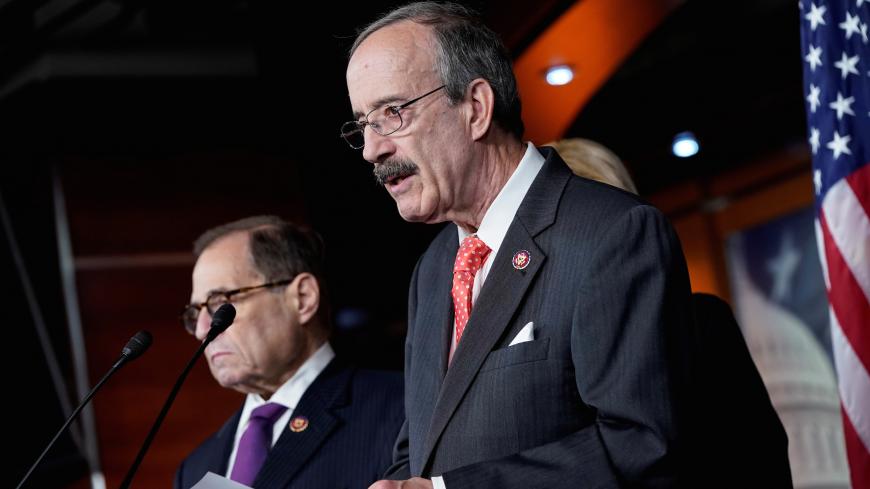 Chairman of the House Foreign Affairs Committee Eliot Engel, D-NY.., speaks during a media briefing after a House vote approving rules for an impeachment inquiry into President Trump on Capitol Hill in Washington, US, Oct. 31, 2019. - REUTERS/Joshua Roberts

It’s becoming harder and harder for pro-Israel Democrats on Capitol Hill to ignore the increasingly critical voices of the US ally within their party and the presidential race.

House Democratic leaders — who happen to be some of the staunchest Israel supporters on Capitol Hill — this week added language supportive of the annual $3.8 billion military aid package to Israel to a symbolic resolution that endorses a two-state solution to the Israeli-Palestinian conflict.

The stalled resolution passed 226-188, largely along party lines, today. But pro-Israel Democrats only came on board after House Foreign Affairs Committee Chairman Eliot Engel, D-N.Y., added their new language to the bill.

The new provision is a response to the fact that several presidential candidates have come out of the woodwork in recent months with calls to place conditions on the largest recipient of US military aid.

“I’m opposed to conditioning the aid, and I would fight it no matter what,” Engel told Al-Monitor. “The Democratic Party has traditionally been a pro-Israel party, and I see no reason for that to change now. If there are people who are Democrats who don’t feel that way, then I don’t think they should be elected president of the United States.”

Engel also added language to the resolution that reiterates support for Palestinian aid — which President Donald Trump has eliminated.

When Engel’s committee first advanced the resolution in July, Democratic leaders opted not to put it on the floor, even as they passed another nonbinding resolution condemning the pro-Palestinian boycott, divestment and sanctions movement 398-17, which was backed by the American Israel Public Affairs Committee (AIPAC).

That changed last month after the Trump administration repealed a decades-old legal opinion maintaining that Israeli settlements in the West Bank are illegal under international law.

The passage of today’s resolution, introduced by Rep. Alan Lowenthal, D-Calif., marks a major legislative victory for AIPAC’s main rival — the left-leaning lobbying group J Street, which spent roughly $200,000 this year lobbying the House to pass the resolution and other legislation.

“With this vote, the majority of lawmakers have rejected the Trump administration’s embrace of the Israeli settlement movement’s agenda, which undermines US interests, imperils Israel’s future and tramples on Palestinian rights,” J Street President Jeremy Ben-Ami said in a statement after the vote. “They’ve made clear that strong support for Israel’s security must go hand-in-hand with opposition to annexation, holding the line against settlement expansion and active American leadership towards a two-state solution.”

But many of the 25 Democrats who pushed for the firm language on military aid have voiced concerns over the Jewish advocacy group’s calls to condition assistance to the largest recipient of US military aid.

This prompted the chairman of the House’s Middle East panel — Rep. Ted Deutch of Florida — to join Reps. Josh Gottheimer, D-N.J., and Tom Reed, R-N.Y., as well as 24 other pro-Israel Democrats and nine more Republicans to amend the J Street-backed resolution. The new language expresses support for the Barack Obama administration’s 10-year memorandum of understanding to provide Israel with $38 billion in military aid.

“There are those on the far-left side of the Democratic Party — and some of the presidential candidates — who are pushing for new conditions on aid, especially in their interactions with Gaza, which is run by Hamas — a terrorist organization,” Gottheimer told Al-Monitor.

An October poll from the liberal Center for American Progress found that 56% of American voters, including 71% of Democrats, oppose “unconditional financial and military assistance to Israel if the Israeli government continues to violate American policy on settlement expansion or West Bank annexation.”

Sen. Bernie Sanders, I-Vt., is the most vocal proponent of conditioning Israeli military aid in the presidential race —​ going even further left than J Street and all his primary opponents. At J Street’s conference in October he said that some of the $3.8 billion in annual assistance “should go right now to humanitarian aid in Gaza.”

J Street has set any formal Israeli annexation of the West Bank as its red line for placing conditions on Israeli military aid. But it also supports the $38 billion memorandum of understanding.

Notably, J Street did not oppose the effort to amend the Lowenthal resolution with the military aid language. That said, progressive Democrats do not necessarily view that provision as incompatible with calls to attach strings to that assistance. Congressional Progressive Caucus co-chair Rep. Mark Pocan, D-Wis., called the Engel language “meaningless.”

“It’s just restating what current practice or current law is,” Pocan told Al-Monitor. “We don’t really see it as affecting the bill one way or the other. At any time if we feel like we’re better off putting conditions on money and holding back money, Congress could always do that with any country through the normal process.”

Shortly after the vote, Sanders campaign co-chair Rep. Ro Khanna, D-Calif., as well as Reps. Anna Eshoo, D-Calif., and Steve Cohen, D-Tenn., asked colleagues to sign a letter to Secretary of State Mike Pompeo asking him to clarify whether Israel has used US military equipment while demolishing Palestinian homes in the West Bank.

The letter, seen by Al-Monitor, notes that the Arms Export Control Act “narrowly conditions the use of transferred US-origin defense articles” and requires the president to inform Congress if the equipment is used for unauthorized purposes.