The Congressional Progressive Caucus has been instrumental in setting the Democratic agenda to push back against President Donald Trump’s Iran policy. 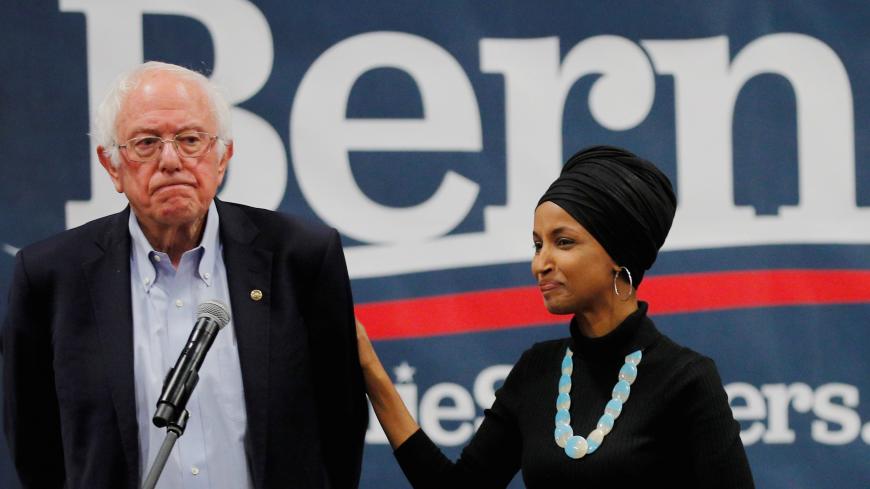 But Pelosi made no mention of Lee and Omar and instead designated Rep. Elissa Slotkin, D-Mich., a moderate who previously worked for the CIA and Defense Department analyzing Shiite militias, to introduce the bill.

The increasing reliance on the Vietnam-era War Powers Resolution and pushback against Trump’s Iran policy illustrates the growing influence that left-wing firebrands such as Sanders and Omar have on foreign policy within the Democratic Party. They’re getting results — and the progressive caucus isn’t done yet.

“There has been a lot of collaboration with the Foreign Affairs Committee, with Slotkin and the leadership,” Omar, who serves as the progressive caucus whip, told Al-Monitor on Wednesday. “We are just going to make sure the American people understand we’ve made a commitment to work on this, and they need to stay engaged to make sure that we fulfill that commitment.”

Omar, who has become a lightning rod for criticism from Republicans and centrist Democrats due to her past statements on Israel, is part of a new wave of freshmen who helped swell the ranks of the progressive caucus to 100 members in the 2018 midterm elections.

Immediately after the Trump administration’s Wednesday briefing on the Soleimani strike, the progressive caucus convened a press conference to push for the war powers resolution as well as two other bills introduced by Lee and Rep. Ro Khanna, D-Calif., a co-chair for the Sanders presidential campaign.

“We have endorsed two important bills that have already passed with bipartisan support in the House of Representatives,” said progressive caucus co-chair Rep. Pramila Jayapal, D-Wash. “That is our belief in what needs to happen, and we’ve been working very closely with leadership on that.”

Two hours after the press conference, Pelosi announced that she is also considering the two additional votes that the progressive caucus is pushing.

One potential vote is on Lee’s bill to repeal the 2002 authorization to invade Iraq, which the White House has cited as the legal justification for the Soleimani strike. The other vote would be on Khanna’s bill to defund offensive military action against Iran absent congressional authorization. (Sanders has introduced the same legislation in the Senate.)

Both these initiatives are major priorities for a coalition of anti-war activist groups that work closely with the progressive caucus.

Notably, Democratic leaders dropped both the Lee and Khanna provisions from the annual defense authorization bill last year after negotiations with the White House and Senate Republicans. House Armed Services Committee Chairman Adam Smith, D-Wash., argued at the time that it was necessary to kill both provisions in order to secure support for a compromise bill.

“Just as we were led into Vietnam and Iraq by lies, the Trump administration is misleading us on Iran,” Sanders argued. “They have justified the assassination of Qasem Soleimani by claiming he was planning imminent attacks on hundreds of Americans in the region, and they produced no evidence that would justify this claim, not even in a classified setting.”

The presidential hopeful also touted his success in getting Congress to pass a war powers resolution intended to end US support for the Saudi-led coalition fighting Yemen’s Iran-backed Houthi rebels last year. Before Sanders introduced his Yemen resolution, Democratic leaders viewed war powers resolutions with skepticism and opted not to use them.

“While President Trump vetoed that resolution, there is no doubt that it played a major role in signaling to the region that the American people do not support the Saudi-led intervention in Yemen,” said Sanders.

Mindful that Congress would not have enough votes to override another inevitable Trump veto on a war powers resolution, Democrats opted to introduce it as a resolution that would not require Trump’s signature even if it passes the Senate.

“This is a statement by the Congress of the United States, and I will not have that statement be diminished by whether the president will veto it or not,” said Pelosi.

This has prompted Republicans to deride the resolution as a symbolic political gesture without the force of law because of a 1983 Supreme Court ruling on congressional resolutions that do not require a presidential signature.

“This is a meaningless vote that only sends the message that Democrats would rather stand with their socialist base than stand against Iran,” said House Minority Leader Kevin McCarthy, R-Calif., while accusing Pelosi of “blaming America for Iran’s escalation.”

“It’s nonbinding in that there’s nothing the Democrats could do if they wanted to enforce anything,” Burns told Al-Monitor. Still, she said, “It sends a signal to both the voters and the international community that Congress is not supporting the actions of the president.”