Minister Zeev Elkin accused IDF Intelligence Chief Herzi Halevi of faulty assessments, claiming that the military does not take into account incitement by the Palestinian Authority. 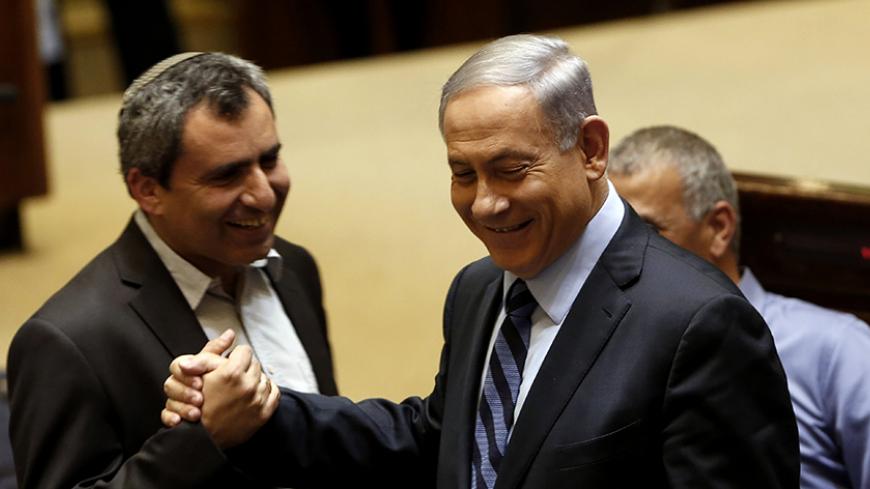 On Nov. 1, the Israel Defense Forces’ (IDF) Chief of Military Intelligence Maj. Gen. Herzi Halevi appeared before the government to give the Cabinet a security briefing. This part of the Cabinet meeting was therefore classified as “top secret.” Halevi spoke about the situation within the Palestinian Authority (PA) and the Palestinian perspective on the reasons for the outbreak of this current wave of violence.

He told the Cabinet that there were three compounded reasons as to why these riots erupted: tensions on the Temple Mount; the arsen attack in the Palestinian village of Douma, in which the Dawabsheh family was murdered on July 31; and an overall sense of hopelessness and frustration among the younger generation of Palestinians.

At that point, a minor clash erupted between the chief of Military Intelligence and Minister Zeev Elkin. Elkin, who is minister of immigration and absorption, of Jerusalem Affairs and of heritage, asked Halevi why he didn't include in the presented assessment strong Palestinian incitement, which, he claimed, can still be found in the Palestinian official media and in the educational system. Elkin said that what Halevi told the Cabinet is the Palestinian narrative, and that it seemed as if Halevi was a spokesman for the PA and not the Israeli government. Halevi responded to Elkin by saying that his role as chief of Military Intelligence in the IDF is to brief the political leadership about what is happening on the other side and what the enemy is thinking. Elkin was not convinced.

Elkin is part of the ideological right wing. He wears a yarmulke and lives in a settlement. He is also a member of the Security Cabinet and therefore privy to Israel’s most secretive intelligence briefings. The questions he posed to Israel’s “national appraiser” offer some indication about the nature of the conflict now underway between the Benjamin Netanyahu government’s ideological right wing and the more traditional approaches of the IDF and the defense system. The latter still regard Palestinian President Mahmoud Abbas and the PA as playing an important role in restraining violence.

Following his little clash with the chief of Military Intelligence, Elkin agreed to speak to Al-Monitor, to clarify his ideas about the reasons behind the current Palestinian wave of terrorism.

“I think that Military Intelligence should present us with an analysis of the deep-rooted, real reasons why this wave of terror erupted, instead of what the Palestinians are saying about it. We can see and hear what they say about it just about everywhere. It is more important for [them] to provide us with an in-depth analysis of the real series of developments behind what is happening here. There is no debate that what we are witnessing right in front of us now is new, and that it is something that never happened before. This includes the profile of the assailants, who are especially young, and the meager organizational structure behind the attacks. There is no organization. There is no hierarchy. There is no planning. There is no infrastructure. There are no logistics. Everything is very random and local. It is very much influenced by the prevailing mood.”

Text of the interview follows:

Al-Monitor:  So does it mean that so far, you agree with the chief of Military Intelligence?

Elkin:  Yes, but the situation is much more complicated than what he presented. We witnessed the same phenomenon throughout the Arab Spring, from Tunisia to Bahrain, including Tahrir [Square]. These are young people with no organizational structure, who are sucked into something. Social networks don’t create reality; they reflect it. The sense of revulsion that was felt toward the [Hosni] Mubarak regime was not created online. It took shape in the hearts of the people and shifted from there to the Internet.

Al-Monitor:  Where is it coming from?

Elkin:  There is a very interesting demographic component to it. The proportion of young people in Arab society has grown considerable as a result of something that occurred 20 years ago, when record fertility rates typical of the Third World coincided with medical modernization penetrating the region. This resulted in many more babies being born, but also in many more surviving. The current trend is a decline in fertility that comes with modernization, but 20 years ago record birthrates coincided with modern medicine. The result of this was a pyramid-like structure in Arab society, with an especially high ratio of young people. When these young people have no way to advance themselves, because their society is not creating more jobs, we get the same sense of frustration and desperation. Now add the fact that social structures are changing. The society has gone from being vertical to horizontal. There is no hierarchy. The status of parents has declined. The status of the government has declined. Neither of them can provide solutions, which leaves masses of young people connected to their peers via social media.

Al-Monitor:  So what is different between what you are saying and what the head of Military Intelligence is saying?

Elkin:  We are coming to the difference. Israeli intelligence has gotten used to the idea that if the PA opposes terrorism, then there is no terrorism. The thing is that this situation has changed. The current wave of terror isn’t coming from organizations with a leader, with orders or with a hierarchy, infrastructure and bomb-makers. This kind of terrorism emerges from the field, from the pervading mood. It has no head, and no tail either. That is why Abbas can play a double game. On one hand, his security forces continue to oppose the kind of terrorism with which we are familiar, but they are not doing anything to oppose this wave of terrorism. It may actually be the other way around. They might actually be stoking it with their nonstop incitement. During the second intifada [2000-2005] 15 years ago, the debate was whether [late PLO leader] Yasser Arafat actually ordered the Tanzim [Fatah movement's militia] to commit terrorist attacks, whether he just winked and nodded, or whether he mounted the tiger’s back only after it started to get out of control. Today it is obvious that Abbas is keeping the Tanzim out of the fray and that the security forces are not participating in terrorism. There is no argument about that. Nevertheless, those very things we once discounted, such as an educational system that fosters hatred and official television and radio channels that incite the masses, are now infiltrating the Internet. From there they reach the street, and from there they reach the same young people that we have been discussing.

Al-Monitor:  Could it be that Abbas has no other choice? After all, he can’t stand alone against the entire Palestinian people. There’s a feeling of depression and uselessness. Meanwhile, the social networks are seething. Can we expect him to protect Israel’s security, when there are no negotiations and everything is stuck?

Elkin:  The situation is much more complicated than anything we are used to seeing. Security cooperation is still very important, but what they [the Palestinians] are saying is no less important. Here is an example. In one riot in the West Bank, the head of the Preventive Security Force’s son was injured [in reference to Palestinian Intelligence senior Majid Faraj]. The father fights terror, while his son participates in it. They are part of the same family. We must not forget that the current situation serves the interests of Abbas. On one hand, he is still considered a foe of terrorism, but on the other hand, the current wave of terror is bringing the Palestinian issue back into the public’s awareness.

Al-Monitor:  And we’re not to blame for that, at least in part?

Elkin:  We also share part of the blame. We can’t ignore what is happening on the Palestinian street. A Palestinian student who completed a degree in computer science can do nothing with that degree, so he’ll work for us in construction or maintenance instead. This happens after he has been brainwashed to hate us by the educational system for the past 20 years. It is, therefore, understandable that at some point he would prefer to pick up a knife and commit suicide, instead of continuing to live in such desperate circumstances. The Israeli right was also blinded. We thought that we could sweep everything that is happening in Palestinian society under the rug, and that was a mistake. In East Jerusalem, we must insist on governability, but at the same time we must also invest in the area, improve employment opportunities and expand economic horizons in order to offer hope. That is no less important than our intelligence and defense mechanisms.