Israeli minister: We must strengthen control over East Jerusalem

In an interview with Al-Monitor, Likud Minister Zeev Elkin called on the government to direct more resources to East Jerusalem and sanction Palestinian President Mahmoud Abbas and Fatah if they continue their incitement against Israel. 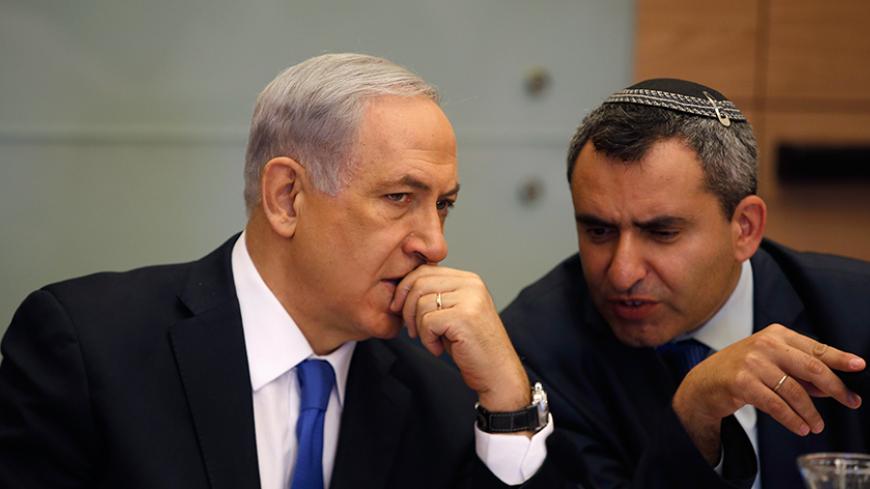 “It’s not enough to deal with the security aspects of this wave of terrorism. At the same time, we must intensify our supervision and control over the school system and media in East Jerusalem. Otherwise we cannot fight against the shaping of ideas that lead to terrorism,” said Immigrant Absorption Minister Zeev Elkin, a member of the diplomatic-security Cabinet, in an interview with Al-Monitor.

Elkin, a Likud member, also proposes punitive measures against Palestinian President Mahmoud Abbas for his anti-Israel incitement, for example by pulling his VIP pass or imposing economic sanctions against him.

The interview with Elkin was conducted on Oct. 15, at the end of a tumultuous week for security issues. The week started with a dramatic spike in terrorism in the heart of Israel and ended on a more subdued note. According to Elkin, no conclusions can be drawn as yet from the decline in recorded attacks. He claimed that we are facing a new type of terrorism, one not orchestrated by an organized leadership, as was the case in the second intifada, but rather by pervasive sentiments on the street and on social media that prompt young people to act, much like the Arab Spring. “We should be asking ourselves what influences this atmosphere and what builds it up,” said Elkin. “If we want to get a handle on this, beyond dealing with the security aspects, we have to deal with the root cause.”

Al-Monitor:  You are not referring to diplomatic negotiations, correct?

Elkin:  No. I don’t believe in the separation formula espoused by the left, based on an assumption that one can build a small piece of Europe in the Middle East, with them on one side and us on the other. It doesn’t work because Islamic society is turbulent and they come at you from over and under the fences. In the end, it breaks through the borders you try to create. Europe tried to say that it didn’t care — until its own frontiers were breached.

Al-Monitor:  So what do you suggest as a solution?

Elkin:  One of the problem's roots is the atmosphere of hate toward Israel, fueled by the Palestinian school system — textbooks and curricula. It is also fueled by Palestinian television and other media, by speeches such as the one delivered by Mahmoud Abbas yesterday. Everyone paid attention to that speech and condemned it, including left-wing politicians, but the same things are said day after day by his ministers and advisers. These things exert an influence. Their consequences are predictable. I contend that we must create leverage, just as you would against terrorism, and treat the shaping of a certain type of atmosphere as you would a terrorist attack, for all intents and purposes. Let’s start with East Jerusalem because [the residents] are our responsibility. A society must protect itself.

Al-Monitor:  Do you think you can gain control of the incitement on social media?

Elkin:  Social networks don’t shape consciousness. They reflect it. What shapes ideas are media and education. We have to start asking ourselves what they teach in East Jerusalem schools. After all, we never asked, even though we fund 50% of their budget. We supervise in [the Arab Israeli towns of] Nazareth and Taibeh, and that’s why they cannot glorify martyrs in their curriculum and use maps on which Israel does not exist. But in East Jerusalem, they teach according to the Palestinian curriculum, and the implication is obvious. Our goal is to try and get to the point where the Arabs of East Jerusalem feel like the Arabs of Israel, for better and worse. For us that means having to supervise what goes on there and influencing things. We have built a kind of invisible wall vis-a-vis the neighborhoods of East Jerusalem. But that’s not normal, that’s not governance. This worked according to "They don’t harass us as long as we don’t harass them," but this is not a concept of governance.

Al-Monitor:  So they are right, those who claim that under the rule of the right, we have divided Jerusalem?

Elkin:  No, it’s the other way around. From a social point of view, Jerusalem is increasingly united, because the point of reference for the young is the western side of the city, and half of them work there. This is also one of the causes of the social crisis; we act as though they were invisible. I say that if we don’t want this to haunt us, we have to be there, for good and bad. It’s not just for bad, it’s for good, too: They deserve the same number of classrooms that Taibeh gets and the same level of financial investment. The same goes for physical infrastructure. On the other hand, one must ensure that law and order are enforced and taxes paid. Life must be normalized there. We also have to ask ourselves what goes on with Palestinian television and propaganda, and why we put up with incitement by senior officials of the Palestinian Authority [PA].

Al-Monitor:  How do you think Israel should react to Mahmoud Abbas’ speech of incitement, blaming Israel for murdering a 13-year-old terrorist who actually wasn’t killed?

Elkin:  There’s an array of options. At one end of the spectrum, there’s what we did [during the second intifada] to [late PLO leader Yasser] Arafat — a blockade of the Muqata [the Palestinian headquarters in Ramallah] — but there are many things in between. Even before his speech I said the State of Israel should convey to him that we will not put up with his conduct. And as long as he keeps talking the way he does, he will not have a VIP pass [for crossing points]. We will not allow him and his ministers to move freely, and we will also find a way to hurt him financially. Clearly, he and his family have business that is dependent on us in every sense. After all, how is the Fatah regime funded? It is completely rotten and based on a connection between power and business that can easily be disrupted. We can easily impose measures that he will find painful. One need only look at how the Americans handle their problems in order to understand. The PA is dependent on us far more than we are on them.

Al-Monitor:  Defense experts claim Abbas actually acts to prevent terrorism. What do you think of that?

Elkin:  We are living in a schizophrenic reality. The prime minister says Mahmoud Abbas is inciting, and five minutes later some security source briefs reporters and says Abbas combats terrorism. It looks as if someone is lying, but no one is lying because Abbas does both. If we judge him according to past standards, he’s OK because he does not issue orders to mount terror attacks, but his incitement leads directly to terrorism. It’s more sophisticated than it appears, because he creates a frame of mind. The PA, after all, has control over the media, school programs, education. I didn’t need Mahmoud Abbas' speech in order to understand what is happening here. I keep saying that we have to take the anti-Israel sentiment and incitement that emanates, inter alia, from the PA far more seriously. When the PA, by law, gives a special allowance to a terrorist who murdered an Israeli, and the amount depends on the number of Israelis he murdered, I don’t need any more. Today, the highest wage earners in the PA are ministers or those who have killed several Israelis. In other words, there are two ways to get ahead — doesn’t that send a certain message to the young generation?

Al-Monitor:  What about the Arab Knesset members? Are they also part of the incitement machine?

Elkin:  This is certainly a problem: our willingness to put up with it. True, we didn’t ignore it and we noticed their incitement because it was said in Hebrew, but in the long run there’s a system that protects them and there are rarely any indictments against them. This is a mistake, because in actual fact what do we have? They start competing with each other. After [Joint List Knesset member] Haneen Zoabi does what she does and it goes over and she is re-elected to the Knesset, [Joint List Knesset member] Ahmed Tibi cannot stand idly by, and has to outdo her. They know they won’t pay. You see Knesset member [Jamal] Zahalka and hear Knesset member Tibi and it’s clear this isn’t normal. They know they are lying.

An Arab Knesset member whose name I cannot mention said, in my presence, something stupid and evil about the Temple Mount. He was told to call the district [police] commander, with whom he’s on good terms, and they talked and the Knesset member got detailed answers. And still, he repeated what he said before, knowing full well it was a lie. I asked him afterward whether he thinks the police officer lied to him, and he responded in the negative. That did not prevent him from traveling abroad and publishing lies everywhere.