Legislation introduced in the Knesset to prevent future kidnappings may just be to please constituencies on Israel's right. 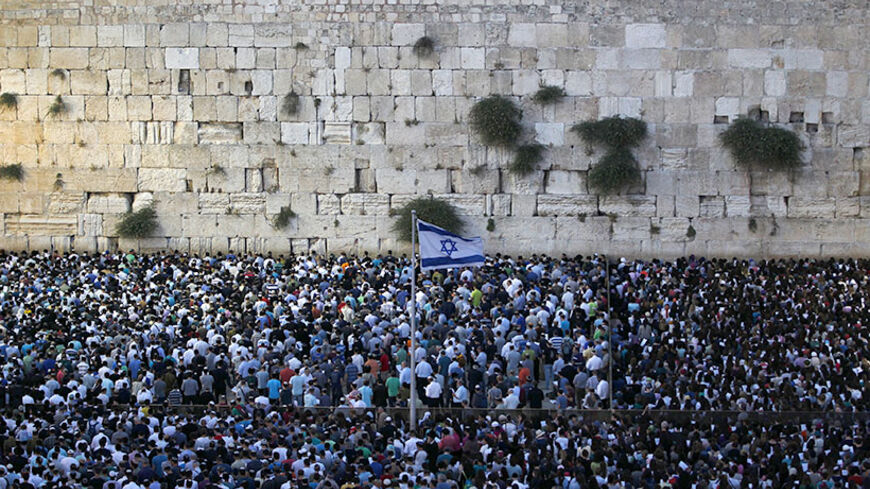 Israelis take part in a mass prayer at the Western Wall in Jerusalem for the return of three abducted teenagers, June 15, 2014. - REUTERS/Ronen Zvulun

On June 19, the new chairman of the Knesset Foreign Affairs and Defense Committee, Ze’ev Elkin, tabled a proposed bill enabling the re-jailing of terrorists freed in diplomatic deals. It was six days after the three youths were kidnapped and public sentiment was ripe. According to the proposal, freed inmates can be sent back to jail if they violate the terms of their release or if the government adopts a decision invalidating the prisoner release.

The purpose of the bill, as defined by Elkin in his press release, is to “wipe out the phenomenon of kidnapping civilians and soldiers for the purpose of obtaining some type of terrorist release deal.”

The bill presented by Elkin, who represents the hard-core right wing in the Likud Party, is the latest in a series of proposed legislation drafted in recent months by Knesset members on the right. The wave of these types of bills was generated by the renewed negotiations with the Palestinians, which have since collapsed, and the objection of these lawmakers to the release of Palestinian prisoners in a framework of goodwill gestures that enabled renewal of the talks.

Among the proposed bills drafted and marketed with great fanfare one can list the proposal by Knesset member Ayelet Shaked to ban the release of terrorists jailed for murder, which was approved in a preliminary Knesset vote at the beginning of June. One can also list two additional proposals, initiated by Knesset member Miri Regev of the radical right-wing arm of the Likud, which are also designed to limit government maneuvering in diplomatic negotiations: one calling for annexation of the Jordan Valley and the other stipulating that the government cannot start negotiations over the status of Jerusalem or the Palestinian refugee issue without Knesset approval. Members of Knesset and ministers from the right supported the draft bills, which embarrassed the prime minister when they were announced and caused Israel significant damage in the diplomatic arena.

On the face of it, Elkin’s bill is different than those tabled by Shaked and Regev. It does not prevent the government from deciding to release prisoners. Rather, it focuses on punishing a terrorist who reverts to terrorism. That is why Knesset members from the left, such as Amram Mitzna of the Hatnua Party and Eitan Cabel of Labor, agreed to co-sponsor the proposed law along with Orit Strock, Ayelet Shaked and Moti Yogev, their ideological opposites.

But it’s hard to shake off the sense that the law is solely aimed at serving public sentiment on the right, raking in political capital and diverting attention from the return of the diplomatic stalemate.

In these stormy times, when Israel is following the search for the three youths, and in the absence of negotiations with the Palestinians, it’s easy to present this law as a solution to the problem of the kidnappings. But the proposal ignores the simple fact that has been proven more often than not: In most cases, the threat of imprisonment will not deter a person bent on carrying out a terror act out of ideological nationalism.

“It’s hard to ignore the list of proposed laws designed to enable the political right to tie the hands of the diplomatic echelon. It’s too bad that Knesset members from the left are cooperating with this activity and helping Elkin make political capital,” a defense source told Al-Monitor. “It’s true that Elkin’s proposed bill is much more moderate, but it creates a certain atmosphere. The whole issue of prisoner release is a sacred cow in Palestinian society and such laws don’t help attempts to rebuild trust. In the case of the right wing, it’s understandable. But Knesset members who preach in favor of renewed negotiations should not cooperate with such ‘atmosphere-setting’ laws, in my view,” said the source.

Knesset member Cabel rejects the criticism directed at him: “I don’t have to be anyone’s automatic soldier. I am all for an agreement with the Palestinians. … This [proposed bill] does not tie the hands of the diplomatic echelon. On the contrary, it enables negotiations over the release of prisoners.”

Al-Monitor:  It seems that this bill is designed mainly to serve politicians on the right.

Cabel:  I refuse to be fixated. On defense issues, I am more of an activist. I just want to remind you that I objected to the [Gilad] Shalit deal until almost the last moment. As a citizen and a military fighter I have a hard time with freeing terrorists. That does not contradict the fact that I am in favor of peace and willing to go a long way for its sake.

Al-Monitor:  And that will prevent kidnappings?

Cabel:  It will not prevent, but it will create pressure from below. My signature on the bill is a tactical move. It will not solve the problem, nor is it meant to solve it. It does not advance peace and does not prevent peace, and it has no political significance. On a tactical level, it will lower the flames a bit.

Al-Monitor:  And you don’t mind that Elkin is trumpeting it among the public on the right for his political goals?

Cabel:  As far as I’m concerned, it’s OK. After all, he’s a politician and so am I. Our public, which is located at the center-left, is, after all, more inclined to patriotism. It wants peace but also wants to feel that we are not cooperating with the blackmail of kidnappings.

Knesset member Mitzna, in a conversation with Al-Monitor, also said he had decided to sign on to the proposed bill after becoming convinced that it was not designed to prevent negotiations. “Elkin sat down with me and explained the essence of the law,” said Mitzna, one of the politicians most identified with support for diplomatic negotiations. “I checked to make sure it does not tie the government’s hands by preventing a prisoner release if needed,” he said.

Al-Monitor:  And as a former general of the central command who knows the Palestinians well, will this bill prevent kidnappings?

Mitzna:  The law says that if a terrorist reverts to terrorism or violates the terms of his release he can be sent back to the same jail to serve his original sentence. I don’t think this will deter. But I don’t think there’s anything that will truly deter terrorists who act out of nationalist motives. The bills proposed by Shaked or Miri Regev won’t, either. On the other hand, Elkin’s law is moderate and it aims to serve justice, and that’s something, too.

Al-Monitor:  Are you not troubled by the fact that the law serves a certain sentiment on the right and promotes political goals?

Mitzna:  I am a man of the left, but I don’t object automatically to proposals by the right.