Will Israel build island next to Gaza? 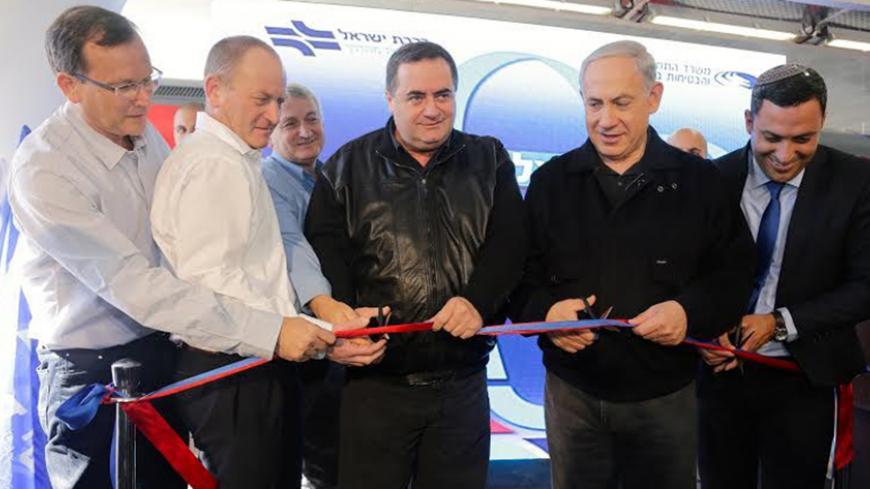 The binational state allegation is “a form of intimidation, to convince us to forfeit territory. No such reality can ever come into existence,” Transportation Minister Yisrael Katz told Al-Monitor. Katz, who is also minister of intelligence and atomic energy, uttered the statement above in response to US Secretary of State John Kerry’s speech at the Saban Forum (Dec. 5), in which he argued that without an agreement with the Palestinians, “Israel cannot be Jewish and democratic.”

In an attempt to deal with the terror wave that broke out about two months ago, Katz, a member of the diplomatic-security Cabinet, proposes that a total closure be imposed on the Palestinian territories where the terror attacks originate. Katz says that the day that portable concrete barriers were erected in East Jerusalem (Oct. 18), in an attempt to lessen the friction between Jews and Arabs in the area, was a “black day” for him. Regarding the diplomatic initiative, he continues to promote the concept of an artificial island in Gaza’s ocean.

Al-Monitor:  John Kerry sounds the alarm over a binational state. Are you concerned that the government, of which you are a member, will be responsible for the loss of the Jewish majority in Israel?

Al-Monitor:  Nevertheless, this is a very weighty proposal that you have in mind, don't you think?

Katz:  Ironically, those people who are very sensitive to human rights, when they talk about evacuating the territories, they bring up the demographic rationale or the democratic rationale, according to which we don’t need the Arabs here. I wonder how the Palestinians view this reasoning, the essence of which is that the greatest fear of the Israeli left is that the Palestinians will be part of the state or will vote here for the Knesset. So they use this argument for everything. This argument is a form of intimidation, to convince us to forfeit territory. No such reality can ever come into existence. And besides, Israel can always tell itself that it hunkers down within its borders plus Area C [of the West Bank, under Israeli civil and security control] not including the Palestinians, and so, there’s no national state. Gaza is, in any case, already a totally different geographic area over which Israel has no formal or de facto control; therefore, I proposed the idea of the artificial lake in Gaza.

Al-Monitor:  And how is your idea progressing?

Katz:  I have been promoting this scheme for years, ever since the disengagement [from Gaza in 2005]. I said, "If it’s going to happen anyway, then we may as well relieve ourselves of responsibility toward Gaza." Today, we have no jurisdiction there, but we do have responsibility because we don’t give the Gazans access to the world, due to security considerations; simultaneously, the Egyptians also cut them off. So humanitarian and diplomatic responsibility fall on us. That’s why the attitude toward our security activities, even if is defensive in nature, is like the stance toward an entity responsible for a certain population.

I looked into the subject of artificial islands, and then I said that an island should be created 4½ kilometers [2.8 miles] from the Gaza coast, with a 4-kilometer [2½-mile] bridge. The island will be 4 kilometers by 2 kilometers. An 8-kilometer expanse is more than the territory belonging to the Israeli city of Bnei Brak. There will be a seaport and airport there, under international control. Israel will oversee overall security, the inspection of boats that enter and the passageways. Security rights must be recognized from the get-go. The Palestinians will receive seaport and aviation services. This gives them an opening to the world, and our security needs are answered too. The world will be happy to underwrite this island, the Muslim countries too, also China. Hotels can be built there; with a little luck, a casino too.

Should the State of Israel decide to promote this concept, our security situation will even improve. You can’t dig tunnels into the ocean, and a bridge can always be disconnected. This is an original idea, and also viewed as a diplomatic initiative. I can’t go into too many details, but I can say that there is a certain amount of readiness for such a scheme.

Al Monitor:  Are we nearing the end of the terror wave?

Katz:  What is disturbing is that there is not even one security official who can point to a certified date and say that he evaluates that the current terror attacks will cease by that date. This is the most significant issue. Therefore, our coping techniques are limited in scope since there is no expiration date for this terror campaign. It is the political echelons, not the security echelons, that must decide when we reach the point where we refuse to tolerate the scope of terror and decide to change our mode of action. In other words, to deviate from our current policy that dictates, "Let’s separate the population involved [in terror] from the population that is not involved; let’s allow everyone to travel on the roads and not impose closures."

There is one spot on the Jalama checkpoint from [the Palestinian city] of Jenin to Israel that, after attacks took place there all week, Israel closed free passage at that checkpoint. Within two days, the local Palestinian leadership took action to prevent attacks. And even though we’re talking about Islamic State-style terror, I don’t believe in a total cutoff between the isolated [terrorist] and his surroundings. Ultimately, it’s been proven in the Jenin checkpoint that when it comes to protecting its interests, the Palestinian system is able to get its act together. It sends Palestinian policemen and no more stabbings occur.

Al Monitor:  But the Shin Bet head and the heads of Israel’s other security systems argue that if the general Palestinian population will suffer, then the terror will worsen. What do you think about their position?

The most problematic point I see is that a situation may arise in which if we don’t ratchet things up a notch and try to vanquish [the terror attacks] completely, even though it means taking risks, this could be viewed as weakness [by the Palestinians] and lead to wider circles of terror. For example, the Palestinian apparatuses such as the Tanzim [Fatah militia] and others which at the moment have not yet entered the fray, [could get involved, too].

The day they tried to erect a barrier inside Jerusalem [in October, between Jewish and Arab areas] was a black day for me. This was because it symbolized that terror attacks were able to force Israel to do things that it had never been willing to do before [a de facto division of Jerusalem], not in its wildest dreams, not during the Oslo Accord, not in [any public] statements. Therefore, we must avoid at all costs doing anything that would give the image that we are rewarding terror. Image is of great importance. And, of course, the results. We must take action so that no Jew will be stabbed.

Al Monitor:  Are you saying that we have reached the point at which Israel needs to escalate its responses?

Katz:  No. What I’m saying is that we must discuss this all the time. It is part of the discourse. It should not be axiomatic that we must act in accordance with methods that were appropriate in the first and second intifadas, when we faced [terror] organizations. Now we see a phenomenon connected to the [social] networks and incitement, and a global phenomenon of radical Islam involving copycat attacks. You need to develop all kinds of sophisticated methods to deal with this, and we do that all the time. But at the end of the day, you reach a point where you say to [Palestinian President Mahmoud] Abbas that when all’s said and done, you [Abbas] don’t want the [Palestinian] Authority to collapse and neither do we.

Someone has to tell the Palestinian population in areas that disseminate terror, "You will all pay a price. You won’t go to work in Israel, and you won’t drive on the roads on which there are vehicular attacks and stabbings." If it’s our safety versus unrestricted movement at the Etzion bloc junction, then the junction will be closed to Palestinian movement for a limited period. If terror attacks continue to originate from Hebron at this scale, their rights will be revoked and they will have to decide themselves what is more important to them: to applaud the attackers or grab the children and call them to task. This is the dilemma faced by the government.

Al Monitor:  After months of terror, can you say what the reason is for the eruption of this current terror wave?

Katz:  Do the French understand why French citizens stormed and slaughtered them [Nov. 13]? Does one understand why girls from England go to marry Islamic State fighters? There are several factors: One is connected to the national conflict, but the other element is connected to Hamas-style religious fanaticism; it is a holy war. There is the Islamic State phenomenon of joining the warped brand of Islam that is marketed by the [social] networks, an Islam that involves cutting off people’s heads, that blows away the youths. This is something we never coped with in the past. What motivates two spouses in the United States to slaughter people [Dec. 2] in an organization that assists the disabled? But while the rest of the world does not understand, we understand a bit more.

The bottom line is, how long will we continue to say, "President Abbas incites but is not responsible?" How long can we continue to grant exemptions from responsibility? In fact, we can ask the bigger question: If Abbas is not responsible, then how can goodwill measures to him cause cessation of the violence? The American attempt to mediate now stems from the assumption that Abbas can calm the flames, so is he responsible for setting the fires in the first place?

Al Monitor:  Politically, is there still a chance for a unity government with the Zionist Camp?

Katz:  That is connected to coalition arithmetic. I don’t think that Netanyahu now thinks that he needs [head of the Zionist Camp Isaac] Buji Herzog for worldwide legitimacy. When there are terror attacks [around the globe], the world understands us better. Recently, I attended a meeting with Greece’s Prime Minister [Alexis Tsipras], who is viewed as a socialist bordering on communist, after he was re-elected a second time. He spoke about refugees and fences and sounded like a true [right-wing] Likud member. He said to us, "I understand that you worried about changes in Greek policy due to my rise to power, so I would like to inform you that there will, indeed, be a change, because relations [between the two countries] will be much better." We hear similar statements from more countries. Therefore, the American administration has minimal desire to confront us, because, ultimately, we are the most stable ally in the region, and cooperation with us is more vital than ever. In addition, the [Americans] don’t see that President Abbas is capable of rising, or wants to rise, above the current radical wave [of terror].