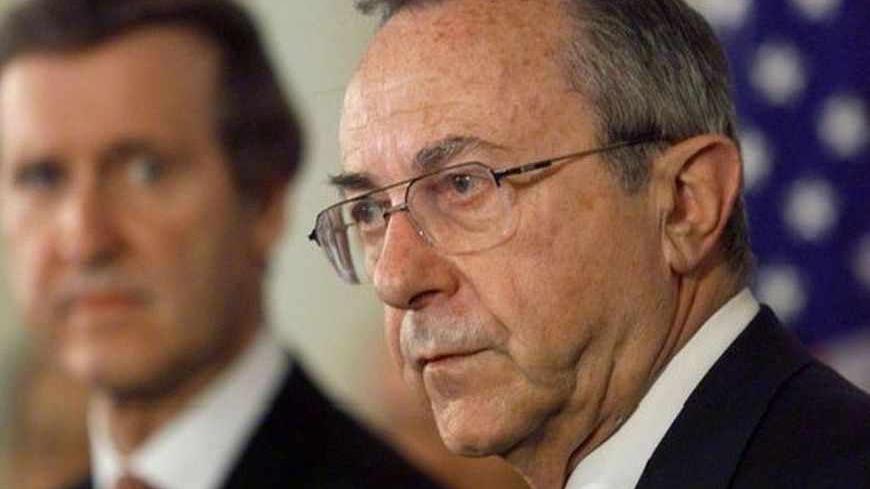 Israel's then-Defense Minister Moshe Arens listens during a press conference with US Secretary of Defense William Cohen (L) at the Pentagon on April 27, 1999. - REUTERS

According to former Defense Minister Moshe Arens, Ron Dermer’s appointment as Israel’s next ambassador to Washington is a perfect fit. So he sounded a bit surprised when I asked him whether Prime Minister Benjamin Netanyahu’s choice wasn’t a way of sticking out his tongue at President Barack Obama by sending him someone who had tried to help former Republican candidate Mitt Romney in the presidential elections.

Arens, the former defense minister who also served as Israel’s ambassador to Washington for one year (1982-1983), thinks that Dermer’s unmistakable closeness, almost intimacy with the Republicans is meaningless with regard to Dermer’s ability to serve as an excellent ambassador.

Arens grew up in the United States and served in the US army. He is viewed as one of the best defense ministers Israel has ever known and as someone who succeeded in maintaining a close, effectual relationship with the American administration in all the roles he assumed.

In his youth, Arens was a member of the Revisionist Zionist youth movement and enlisted in the Etzel, the underground organization in pre-state Palestine. For years, he was considered one of the Likud's senior officials and viewed as someone qualified to serve as a prime minister representing the Likud. His views throughout the years have varied within the hard-line ideological axis. He opposed the peace agreement with Egypt in 1979 and the disengagement from the Gaza Strip in 2005, and today he does not think that there is anyone on the Palestinian side with whom negotiations can be held.

At 88 years old, Arens never rests. He is still a member of the Likud, active in the business world and serves as chairman of the board of governors of Ariel University.

In an interview with Al-Monitor, Arens addressed the European Union's new boycott directive on the settlements and calls it a tempest in a teapot. Incidentally, his opinion is in direct contrast to that of Economy and Trade Minister Naftali Bennett, who calls it “economic terrorism.”

Al-Monitor:  My colleague Akiva Eldar argues, in an article he wrote, that Netanyahu’s appointment of Dermer is like poking a finger in Obama's eye …

​Arens:  I don’t see any problem at all here. If there had been such an objection on the part of the Americans, the appointment wouldn’t have gone through. I was once an ambassador and I know that the hosting country has to approve the appointment. Ron Dermer has all the qualifications for being a good ambassador.

Al-Monitor:  And his closeness to the Republicans won’t make things difficult for him vis-à-vis Obama’s administration?

​Arens:  There is no connection. When I was appointed ambassador to Washington in 1982, it was after the attack on the nuclear reactor in Iraq. At the time, the Americans were furious at Israel. They threatened to freeze the shipments of F-16 aircraft and talked about sanctions against us. In addition, I was also a close associate of [late Prime Minister] Menachem Begin — the man who gave the order to attack the reactor. All this did not in the least interfere with my job.

On the contrary, I think that the Americans always prefer an ambassador who is considered a close associate of the prime minister. I was that kind of person, and Dermer is as well. Therefore, he has an advantage as far as they are concerned. Dermer is a man who can convey direct messages to the prime minister from the American president, and the reverse. Both sides know that there won’t be breakdowns in communication. Often, when the ambassador is a professional official, they circumvent him. Dermer’s closeness to Netanyahu and the fact that he worked with him until recently are advantages.

Al-Monitor:  Dermer is 42 years old and lived in the United States until the age of 30, making him a kind of new immigrant. Is he the figure that Israel needs to represent us to the Americans?

​Arens:  That, too, is an advantage, if you ask me. You have to understand that Israel’s ambassador to the United States is not just an ambassador to the president, but also to the congress and the public. The fact that he knows English on the mother-tongue level and will use local expressions gives him a great advantage. In the period when I was ambassador, during the First Lebanon War, I appeared very frequently on the American media. Sometimes I would fly twice a day from place to place, and I remember that everyone recognized me on the airplanes.

It is important to understand that almost half of the Americans are Republicans, and the same is true for congress. The connection to congress is very important. I was personally familiar with every single congress member. I was on excellent terms with American Secretary of State George Shultz, and we are friends to this very day.

One more thing: I appointed Netanyahu to be Israel’s deputy ambassador in Washington, and at the time people also talked about him being half-American, and how can he represent Israel. He was excellent in his position and afterward also as ambassador to the UN. I had part in that appointment as well.

Al-Monitor:  How do you feel about the European Union’s boycott proclamation against the settlements? It seems to be a sign of additional deterioration in Israel’s international status.

​Arens:  In my eyes, it’s a tempest in a teacup. Most people don’t understand what it’s all about. I checked it out and I understand that it doesn’t involve any substantive change. People here talk about grants and budgets in the fields of study and development. Clearly, those who think that we need to withdraw from Jerusalem and the Golan Heights will try to use this to prove that their opinions are justified — after all, it serves their purposes. It could be that our prime minister was alarmed by the hue and cry, and that’s why he responded immediately. All the responses were disproportionate. When I checked, I understood that it’s not a boycott of all products, but something very specific. Not a big deal.

Al-Monitor:  But how can you brush it off so quickly? Isn’t this testimony to a change for the worse in the atmosphere toward us?

​Arens:  It would be better to clarify the process of the wording of such a recommendation. In my opinion, it is on the level of civil servants in Brussels.

Al-Monitor:  Why is that important?

​Arens:  Because if it were related to the echelon of European leaders who try to pressure Israel — [German Chancellor Angela] Merkel and [UK Prime Minister David] Cameron, for example — then they would not have also included east Jerusalem and the Golan Heights. They would have limited themselves to one thing. That’s why it doesn’t seem to me to be their decision. To put Jerusalem and the Golan Heights into one package makes no sense. For example, [pharmaceutical company] Teva has a factory situated in the area of Route 443, which is ostensibly within the directive. That is not logical. What, they’ll boycott Teva?

Al-Monitor:  But you are ignoring the fact that harsh steps are being taken against us. It is a success for the Palestinians who are fighting against us in the diplomatic arena. This is also a form of intifada.

​Arens:  We have a tendency to get hysterical. There’s nothing to get agitated about. At Brussels' official level, there are people who don’t like the State of Israel and claim that we act like the Germans in a certain period. That’s all.

Al-Monitor:  Where is all this taking us?

​Arens:  We have to ask where the Middle East is going, the turmoil in Syria and Egypt. Under these circumstances, we have to be very cautious. We have to be very thankful that we did not hand over the Golan Heights to the Syrians — there were those who thought that was the right thing to do. If we didn’t have control of the Golan Heights, the mortar shells would be falling now into the Jordan Valley. Whoever heads the state has to be cautious now.

It is important to understand that even if the nations want democracy, it won’t happen immediately. Even in the best-case scenario, there will be a transition period. Even after the French revolution, democracy did not immediately follow. It is a process. Chaos. For us, this is a new situation. When dictators were in control, our worries were about a coalition of Arab nations against us. Now the jihadists are on the borders. We are not worried now about a conventional war, but about terror. But even now we still have to prepare for the conventional-war option, should a new dictator arise.

Al-Monitor:  In summary, is it possible to console ourselves with US Secretary of State John Kerry’s peace efforts? Does he have a chance at bringing about a diplomatic breakthrough?

Arens:  The whole diplomatic issue is complex and complicated now. After all, [Palestinian Chairman Mahmoud Abbas] Abu Mazen does not speak in the name of all the Palestinians, so what kind of diplomatic process can there be? Regarding Kerry, he tries and hopes. The Americans have already erred a number of times in their evaluations in the Middle East — in Iran and Afghanistan, for example.