Details are emerging concerning the migrant boat that sank this week near Malta's shores, loaded with Palestinian children and families who tried to escape misery in Gaza for a new life in Europe. 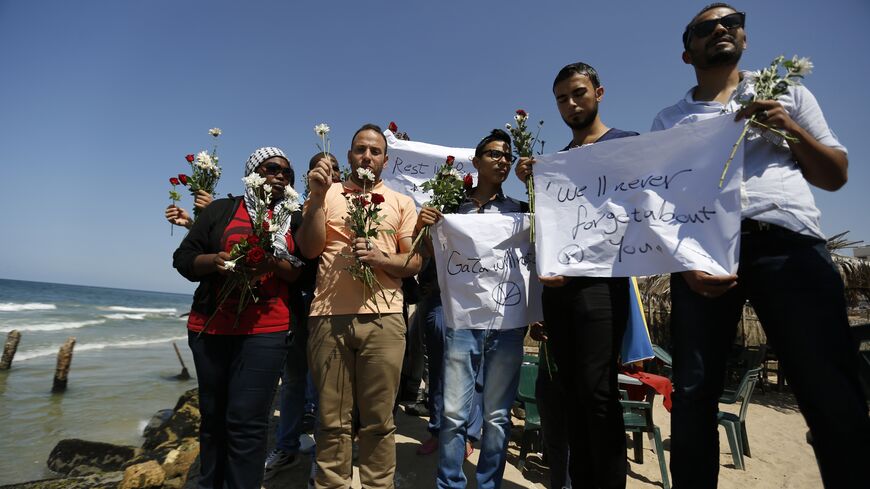 A group of Palestinians prepare to throw roses in the Mediterranean sea in mourning over the loss of fellow Palestinians who had boarded a boat to Europe that sank off Malta last week, Gaza City, Sept. 18, 2014. - MOHAMMED ABED/AFP/Getty Images

The Gaza-based human rights organization Al-Damir (meaning "conscience” in Arabic) has since Sept. 17 been gathering reports and testimonies about the deaths of hundreds of Palestinian refugees off the island of Malta. The refugees left Gaza through a tunnel to Egypt, and boarded a migrant boat in the hopes of reaching Europe and making a new life for themselves. But smugglers deliberately rammed their boat and most of them drowned.

According to reports reaching the organization, some 500 migrants were on the boat when it sank, roughly 400 of them refugees from the Gaza Strip. Only a few survived the tragic accident, picked up by merchant ships sailing in the area, and recounted their ordeal.

In an interview with Al-Monitor, the director of Al-Damir, Khalil Abu Shamala, described the tragedy at sea and the growing phenomenon of young Gazans leaving the Gaza Strip every possible way because there’s no longer any hope for them of ever being able to lead normal lives there.

“The testimony we have gathered so far points to some 400 Palestinians who died at sea,” Abu Shamala said. “There were also Syrians and Egyptians on board, but most were Palestinians from Gaza, including entire families with children and babies.”

Al-Monitor:  When did they leave Gaza? Was it during the war?

Abu Shamala:  Some were already in Egypt before the war, some fled through the tunnels [to Rafah] and some got out after the cease-fire. There are gangs that take advantage of the situation and of the despair, charging $3,000-$5,000 per head. The refugees then leave for Egypt through a tunnel, meet a contact, who, according to testimony we have, wears the uniform of an Egyptian officer. He prepares transit permits for them and takes them to Alexandria. From there they sail to Malta, Greece or Italy.

Al-Monitor:  Are they given a promise of reaching Europe?

Abu Shamala:  Their destination is Europe, but there’s no certainty that they will be granted asylum there. They mean to ask for political asylum on humanitarian grounds.

Al-Monitor:  Is this emigration from Gaza a growing phenomenon?

Abu Shamala:  Yes, for many reasons. Most of them are young people who have lost any hope of a better future, of a change in their situation. There is poverty, unemployment and a blockade on Gaza. They don’t have work and cannot start a family. They want to live like other people in the world.

In the last seven years, there have been three big wars in Gaza; death is in the air. The last war was on a scale we hadn’t seen before. All this pushes young people into desperate acts. Many aspire to leave, to seek a different life in a different place. They are sure that once they get to Europe, everything will work out for them after long years of suffering. They are sure they’ll find work, will be able to get married, start a family and forget about the bitter past. They don’t know that it’s not so easy; they know nothing about the economic crisis besetting all of Europe. But their despair is so great that they believe anyone who tries to sell them a dream.

Al-Monitor:  Did you manage to collect the names of all those who perished at sea?

Abu Shamala:  We are collecting all the names and the emerging picture is frightening. I also have two cousins, residents of the Breij neighborhood, who are still considered missing: Mahmoud and Ibrahim Khalil Abu Shamala. One is 25, married with two children, the other is his 19-year-old brother. They had no work and their father supported them. They tried to find jobs in Gaza to make a living, but there was nothing. They had no money for food, milk for the babies, diapers.

They sold everything they had and managed to come up with $3,000. You know how it is. People in Gaza keep gold for a rainy day and that day has come. They were tempted by an offer to escape from Gaza through a tunnel and gave the smugglers everything. Now both are missing. What a tragedy.

Al-Monitor:  What actually happened out there at sea?

Abu Shamala:  Today, I heard testimony from one of the survivors. He said that smugglers tried to get them onto another boat, a competitor’s, they refused and then the smugglers rammed their boat deliberately and with great force. It split in half and sunk in a matter of seconds. It’s a crime. How can one imagine such murder in cold blood, out at sea, of hundreds of people?

Al-Monitor:  How will such a tragedy affect other young people who dream of getting out of Gaza?

Abu Shamala:  Look, if the situation in Gaza continues as it is, many will migrate. They are fleeing from a slow death to an uncertain death.

Abu Shamala:  The tunnels to Egypt are open. They say [they] are going to work in Sinai or that they’re going to visit relatives. They don’t say [they] want to emigrate. People go out through the tunnels all the time, it’s a normal, routine thing. It cannot be prevented. Today, Mousa Abu Marzouk [a member of the Hamas political bureau] called me and told me that something has to be done to prevent such things from happening. He asked to meet with us on Saturday [Sept. 20] to discuss the issue.

Al-Monitor: Where will the meeting take place?

Abu Shamala: He is here in Gaza. On Saturday, we will meet and look for solutions so that other young people don’t end up as victims and lose their lives this way.