One of the few survivors of the ship that was deliberately sunk off Malta by smugglers, drowning up to 500 people, recounts her story. 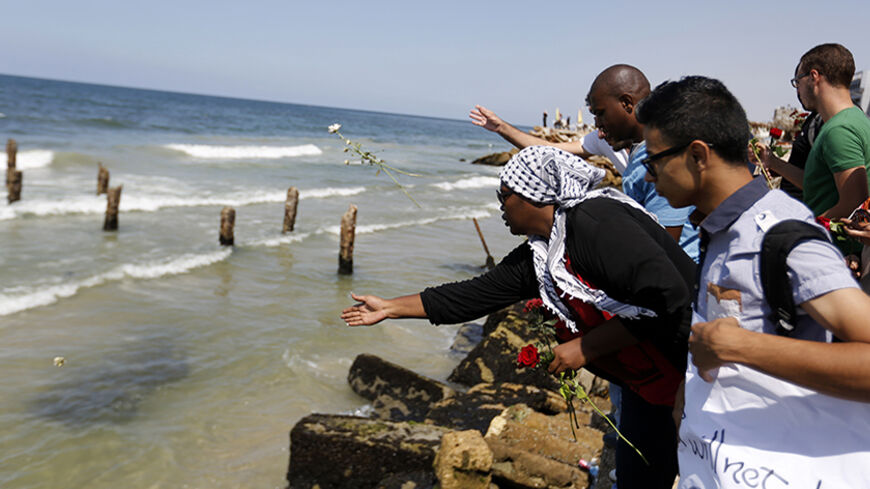 Palestinians throw roses in the Mediterranean Sea off the coast of Gaza City in mourning over the loss of fellow Palestinians who had boarded a boat to Europe that sank off Malta last week, Sept. 18, 2014. - AFP/Getty Images/Mohammed Abed

The migrants paid the smugglers. Buses collected them in groups of around 100 and took them to Damietta, a port on the northeastern edge of the Nile Delta. On Sept. 6, the several hundred migrants from Egypt, the Gaza Strip, Sudan and Syria left Damietta, bound for Italy.

But it wasn’t to be. On Sept. 14, news spread of an almost unprecedented human tragedy in the Mediterranean. The Damietta boat had been deliberately sunk four days earlier by smugglers off the coast of Malta. At the time, around 500 people were believed drowned or missing. Just a handful of survivors remained.

"Najwa," a refugee who asked to use a pseudonym, was on that boat. She told Al-Monitor, "I paid 20,000 Egyptian pounds [$2,800] to the smugglers, but each nationality was paying a different price." Najwa added that the smugglers running the trip were of different nationalities: Egyptian, Libyan and Palestinian.

A Palestinian diplomat suggested that more than half of those missing were Gazan Palestinians escaping conflict, poverty and blockade in a territory crippled by the latest Israeli bombardment. There were more than 100 children on board, Najwa recalled, adding, "One of the guys I met, his house was attacked in Gaza and so he was trying to escape to get to Sweden to see his family."

Four days into the journey, the migrants had already changed boats three times. However, the smugglers — in a separate vessel — said they would have to swap again. Everyone was told to clamber into a small fishing boat that the migrants feared would not hold them. People grew nervous. Najwa said, "We refused to move from the boat where we were to the smaller boat. So they forced us."

According to eyewitness testimony collected by the International Organization of Migration (IOM), at this point a "violent argument" broke out, with the smugglers "yelling and throwing sticks at the migrants." Things escalated from there.

"When we refused, they started throwing people in the sea," Najwa said. "Then they hit our boat several times until it sank."

One man hanged himself before the boat went down, according to IOM. Around 300 people in the lower deck were trapped and drowned immediately, according to other eyewitness testimony. Familiar faces disappeared amid panic and seawater.

"People were dying," said Najwa, flatly. "So many people died in front of my eyes. I saw families from my neighborhood [in Egypt]. One of the four people traveling with me lost both his brothers."

Najwa swam and managed to stay afloat for an hour until a European naval vessel rescued her.

"They detained me for two days, then moved me to shelters with another four people," she said. "Then they gave us the chance to speak to our families."

Najwa's story, corroborated by several survivors interviewed by IOM, points to an almost unprecedented level of cruelty by smugglers in the Mediterranean. "The smugglers never cared about us or our safety," she admits. One survivor told IOM the smugglers were laughing as they sailed away from the shipwrecked migrants.

Egypt's Ministry of Interior has blamed Mediterranean smuggling on organized crime gangs. Interior Ministry spokesman Hany Abdul Latif said, "There is a mafia of smugglers that work on smuggling illegal immigrants to Italy."

At least 700 people are estimated to have drowned or gone missing at sea since last week, bringing the total of dead and missing immigrants in the Mediterranean to 2,900 in this year alone.

On Sept. 13, at least 15 Palestinians from Gaza were reported drowned in Egyptian waters after their boat — also bound for Italy — hit a rock and sank off the coast west of Alexandria. More boats off the Libyan coast also capsized, leaving hundreds of African migrants unaccounted for on Sunday night.

Muhammad Kashef, a monitoring and documentation officer at the Egyptian Initiative for Personal Rights in Alexandria, told Al-Monitor that Egypt's Mediterranean smuggling routes were "halfway between smuggling and human trafficking."

Khaled, a Syrian refugee who is still planning to head to Italy from Egypt despite the risks, claims smugglers increasingly see migrants as nothing more than financial assets — and treat them accordingly. He knows all too well how dire the conditions during these trips can be after his son, Mahmoud, sailed from Damietta.

"I know I am nothing more than a T-shirt or shoes to them, but what can I do? I must go," said Khaled.

Mahmoud was held by smugglers in a seaside hut for half a week without food or water while they waited for a boat to take them away. Khaled said, "They drank the water from the sea. Can you imagine?"

Researchers in Alexandria have been documenting stories like Mahmoud's. Heba Atallah Mansour, who documents refugee migrations and detentions with Alexandria's Refugee Solidarity Movement, told Al-Monitor, "One boat recently stayed in the water for six to seven days, and the migrants themselves contacted the coast guard." In another case, a boat full of migrants waited at sea for a week, until those onboard finally told the smugglers they wanted to go back. Mansour added, "Then the migrants heard the smugglers talking about setting fire to the boat and 'getting rid' of them." They were eventually found by the Egyptian coast guard and taken to a detention center.

The Malta incident may be the worst migrant shipwreck in years, but abuses by smugglers are nothing new, and such mistreatment and violence are increasingly becoming the norm in the Mediterranean.