The families of Palestinians who died in the Mediterranean trying to migrate from Gaza are hoping to find answers about the fate of their loved ones. 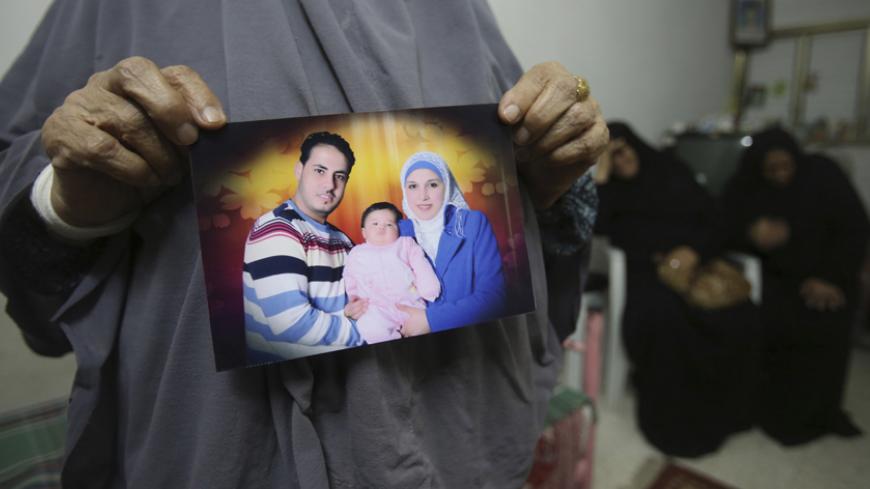 The mother of missing Palestinian boat refugee Shukri al-Assouli holds a picture of him with his wife and daughter at her house in Khan Yunis in the southern Gaza Strip, Sept. 18, 2014. - REUTERS/Ibraheem Abu Mustafa

KHAN YUNIS, Gaza Strip — Dozens of Palestinians emigrating from Gaza are missing after boats ferrying asylum seekers sank in the Mediterranean in September. The first boat was deliberately sunk by unknown perpetrators on Sept. 10, followed by the sinking of a second boat off the coast of Alexandria on Sept. 12 and a third vessel off the Libyan coast on Sept. 14.

Abu Anwar al-Masri lost nine of his family members in the Sept. 10 tragedy, including his two young sons, Fadel, 10, and Walid, 17, his sister and her children. Since that day, Abu Anwar stands by the sea every afternoon, hoping to find at least one body of his sons. Bodies would allow him to give his beloved ones a proper farewell, hold funeral services for them and receive mourners.

For now, Abu Anwar comforts himself with rumors and stories from survivors about his sons. Sometimes he allows himself to think that they are still alive; the smugglers assured him they were not on the drowned boat.

With eyes red from crying, Um Anwar prepares food for her young children sitting in front of dishes at their dining table in her small house. “All we want is to know the fate of our two sons. Did they die of hunger or cold, did they drown, or were they eaten by a shark, as was reported?” she asked.

Dozens of families who lost their relatives in the same tragedy held demonstrations Sept. 21 and 25 in front of Red Cross headquarters in Gaza City, demanding that international and local official bodies intervene to help people learn the fate of their missing relatives.

About a week after the incident, Palestinian President Mahmoud Abbas issued instructions for an official delegation to be sent to Italy and Malta to follow up on the case and the fate of immigrants. Mohammed al-Masri, who lost his brother on the boat and took part in the demonstration, said, “We feel that we are alone in this. No one is supporting us.”

Rami Abdo, director of the Euro-Mid Observer for Human Rights, told Al-Monitor, “About 130 people from the Gaza Strip went missing in the incident of the migrant boat sinking near the Italian coast on Sept. 10. The boat was carrying 450 migrants of different nationalities to Europe.” Abdo further stated, “The Italian and Maltese authorities did not rescue the shipwrecked although they knew of the matter at an early stage.” He believes an international inquiry should be conducted to find and hold the smugglers accountable.

Issam Younis, director of Al-Mezan Center for Human Rights in Gaza, told Al-Monitor that a meeting was held Sept. 21 between a number of human rights organizations and Mousa Abu Marzouk, deputy chairman of Hamas’ political bureau, to discuss the issue of migration from Gaza. He said, “Emigration has not yet become a [big] phenomenon, but human rights organizations are following with great concern the new method of sea migration, because official, domestic and international solidarity is required to stop this threat.”

Younis also stated, “Gazans' limited horizon drives them to resort to emigration in light of the difficult economic conditions plaguing them, especially after the recent war, where there seemed to be no difference between life and death.”

At the religious level, the Supreme Fatwa Council in the Palestinian territories issued a fatwa rejecting emigration by Palestinians, asserting that moving to the unknown is an “abominable crime.” The council stated, “The disaster suffered by Gazans during their attempt to sneak into other countries and escape their difficult reality through the sea portends destructive results.”

In discussing the fatwa, Abu Anwar said of his sons, “This was not a permanent migration. It was only for a few years to work on improving their economic conditions, and then returning to the homeland.” He also stated, “No one likes to see their sons migrate, but that’s the only option I have when I cannot even secure their most basic needs. All I wanted was for them to establish a better future.”

Maha, 32, is still trying to emigrate. “The fatwa is a legal document that we abide by, but it is holding people back. We only immigrate temporarily to look for job opportunities. I support emigration as official bodies did not provide us with alternatives to the crises that we go through every day,” she told Al-Monitor, adding that she strongly objected to sea migration.

Another fatwa issued by Saleh al-Raqab, former minister of endowments and religious affairs and a professor of contemporary thought at the Islamic University in Gaza, stirred controversy. Raqab asserted that there are only three justifications under which emigration is permitted to what he called “infidel countries”: “When people cannot survive in Muslim countries, when they fail to practice their religious rituals in these countries and when they want to escape injustice or pursue beneficial education that is not available in Muslim countries.”

Some of the missing emigrants, such as Ahmed Asfour, were traveling to obtain receive treatment for a war injury. Sajid Hammad had boarded the ship to go complete a master's degree, after having given up hope of the Rafah crossing reopening. Others, like the members of the Masri family, had been in search of work and some security.

Al-Monitor highlighted the issue of migration from Gaza in a Sept. 4 article on Palestinians trying to escape their harsh reality. According to the story, an official in Gaza denied the existence of smuggling networks or even of smuggling tunnels. This position, however, has changed after the announcement of the tragedy in the Mediterranean. The Interior Ministry announced the arrest of a group of smugglers who in return for cash had helped young people trying to leave. Ihab al-Ghussein, under secretary at the Ministry of Information in Gaza, said at a Sept. 20 press conference, “A small number of citizens who had to leave Gaza illegally did so through the recently excavated tunnels.”

Despite the recent tragedies at sea, people continue to try to migrate by boat. A man told Al-Monitor, under condition of anonymity, that he had tried to emigrate from Gaza along with other Gazans from the port of Alexandria after the Sept. 10 sinking. They returned to Gaza through the tunnels after escaping from Egyptian authorities, who discovered their plan. Lamenting the failure of his attempted escape, the man said, “I’d rather die in the sea than live in Gaza.”