War, poverty and an unrelenting blockade have made Gaza so unbearable that young Palestinians are willing to risk the dangers of illegally immigrating to Europe. 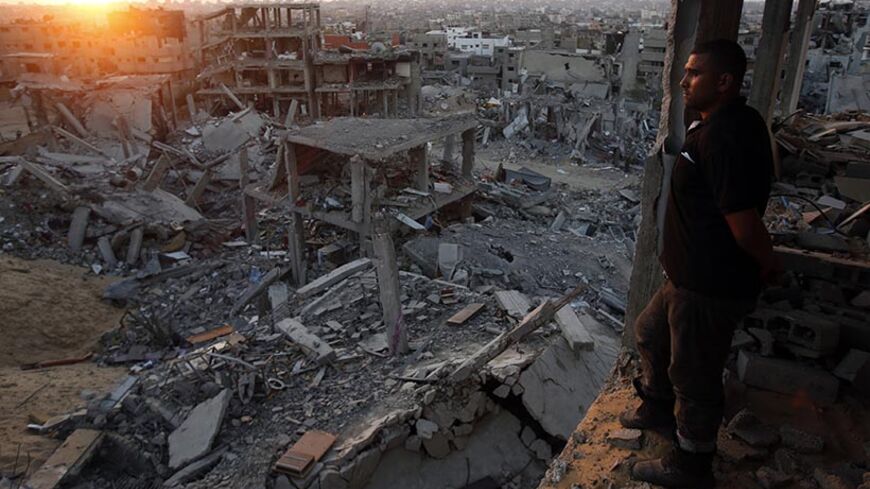 A Palestinian man looks out of his heavily damaged house at neighboring houses in Gaza City, Sept. 3, 2014. - REUTERS/Suhaib Salem

RAFAH, Gaza Strip — Illegal immigration through the shores of Italy to European countries has become the last resort for hundreds of young people escaping war and misery in Gaza.

On June 24, two weeks before Israel’s war against the Gaza Strip and after dreaming about immigration for three years, brothers Amr, 20, and Khaled, 19, (both pseudonyms) began their illegal journey from Gaza to Sweden.

The two young men took a hazardous path to escape the hell of living in Gaza. First, they crossed one of the border tunnels that had not been destroyed by the Egyptian army and then sailed from the Egyptian port of Alexandria to Italy on a ship transporting many other illegal immigrants.

Al-Monitor visited their humble asbestos-filled home in the city of Rafah in southern Gaza. Their father related their story, saying, “I knew that the risk of death threatened my children every second of their illegal immigration trip, but I was forced to accept their decision to save them from poverty.”

He added, “The fate of youth is known in Gaza: either to drown in the quagmire of unemployment and lose their future or to join a resistance faction.”

As a result of the frequent closure of the Rafah crossing, illegal immigration agents started putting fake Egyptian and Palestinian stamps on the travelers’ passports, with the date of the crossing's last opening, to facilitate their movement in Egyptian territory after traversing the tunnels. Abu Fadi, one such agent, explained, “After leaving the tunnels for the Egyptian territory, a stamped passport must be carried. I stamped the passports of these two young men for $150 per passport.”

Their father said, “After the passports were stamped, Amr and Khaled headed to Egypt through a tunnel for $700 each. They were received on the Egyptian side by a person who took them in a private car from the Sinai Peninsula to the port of Alexandria for $500 per person.”

He added, “Immigrants in Alexandria have to wait until the required number of travelers is available for the small boat to set sail. This fishing boat accommodates 70 people, but the number required to head toward Italy is between 180 and 250 people.” He pointed out, “The ship is steered by one person, tasked with transporting immigrants for $1,200 per person, with the exemption of children. When the ship approaches the Italian shores, he leaves the boat to an unknown path.”

His wife interrupted him and said that her sons were aboard a ship for 3½ days before approaching the shores of Italy. “Then, the captain of the ship left them stranded in the sea, not knowing where to go. They wandered near the Italian shores for another three days,” she said.

She lost contact with her sons for 10 days after their arrival in Alexandria, where they had to wait days for the required number of travelers aboard the ship before leaving. She said, “Days before they called, I dreamed that my sons were floating in the sea. It was a terrifying nightmare. I told my husband about it. He contacted their uncle, who is preparing to meet them at his residence in Sweden.”

Their uncle dispelled their mother's fears. He told their father that they were still in Alexandria and that they were doing well. “Their uncle knew nothing about their fate, just like us, but he eased our tension and anxiety,” she said.

During a telephone conversation with Al-Monitor, Khaled, who now lives in Sweden, said, “When we reached the Italian coast, a big ship hovered around us for 24 hours. We yelled and asked for food and water since young people, children and elderly were onboard. The food supplies were lost when the ship tilted to one side in the rough sea.”

Khaled continued, “We kept sending distress signals to the Italian authorities for four days. They told our smugglers that they could not locate our place in the sea. Finally, they came to take us. Another immigrant ship also reached the Italian coast, but 80 people died during the journey.”

Khaled explained that after they reached the mainland, “The immigrants were taken to camps near the border and the Italian authorities asked them to leave.” He added, “Then, we illegally traveled to Sweden across five countries after we contacted our uncle, ​​who sent someone to accompany us.”

In Sweden, the brothers handed themselves over to the Swedish authorities, who marked their fingerprints on a paper proving their residency in Sweden and preventing them from leaving the country before obtaining the residency permit.

Various Egyptian media outlets reported that security forces in the Sinai province of Egypt arrested six Palestinians aged between 21 and 31 years coming from Gaza with forged passports and entering Egyptian territory through tunnels. They were seeking to illegally immigrate to Europe through the port of Alexandria.

Iyad al-Bezem, a Hamas interior spokesman, categorically denied the existence of any tunnels on the border with Egypt to smuggle individuals. In an interview with Al-Monitor, Bezem stated, “All tunnels linking the Gaza Strip to the Egyptian territory were destroyed nearly a year ago.” He indicated that there are no such networks or individuals forging passport stamps.

“Palestinian national security forces are deployed on the border and do not allow any smuggling of individuals," said Bezem.

But Al-Monitor reported in June on smuggling networks in Gaza that work through travel agencies to offer illegal immigration to Europe.

According to economic analyst Maher al-Tabbah, “The main reasons pushing Gazans to consider emigration are high unemployment rates, low political stability and frequent wars, in addition to the intensification of the siege.” He noted, “If a foreign country expresses its willingness to receive Palestinians, thousands will leave the Gaza Strip.”