Though the perils of the journeys ahead of migrants are well known, many Palestinians are still determined to leave the Gaza Strip, where life is no longer bearable. 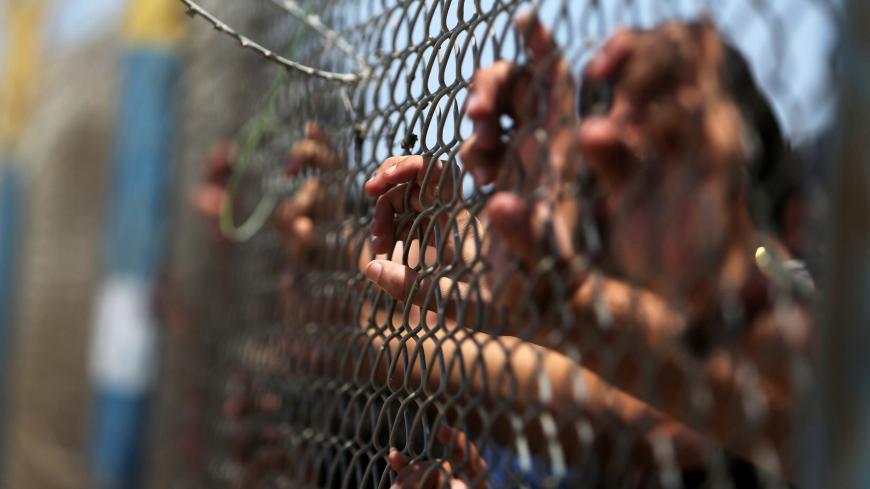 Palestinians gather in front of the Rafah border crossing between Egypt and Gaza during a protest calling for the reopening of the crossing, in the southern Gaza Strip, July 3, 2017. - REUTERS/Ibraheem Abu Mustafa

TOULOUSE, France — When the most recent war on Gaza broke out in 2014, 24-year-old Mohammad Youssef fled to the Netherlands. Since he arrived in Europe by boat, he has been refused asylum twice. But he has no intention of returning to the “prison” of Gaza.

Hamas dismantled its administrative body on Sept. 17, and despite the positive atmosphere surrounding the reconciliation talks, uncertainty continues to plague the city. More than a decade into the Israeli blockade of the Gaza Strip and after three bloody wars, a large proportion of Palestinians are opting for migration. There are no official figures on the number of Palestinians leaving Gaza, but there is no sign of the wave slowing.

During informal visits and conversations with people living in these camps in Europe, I have noted that a large number of Palestinians have applied for asylum in foreign countries such as Belgium and Sweden. It seems Gazans are now competing with Syrian refugees in search of a better future in refugee camps in Europe and Canada.

The Times of Israel reported in January that the number of asylum applications from the West Bank and Gaza to Canada has skyrocketed from 50 in 2010 to 242 during the first nine months of 2016, according to the Immigration and Refugee Board of Canada.

“I fled the Gaza war in the summer of 2014. I fled dictatorship. I felt like I could die in a war or as soon as I contract a serious illness that has no treatment in Gaza,” Youssef told Al-Monitor. “I immigrated to be able to choose my own lifestyle away from crises and away from prejudice against my beliefs and thoughts,” he added.

He said that despite the dangers of his journey to Europe — where he does not yet feel safe, as he has not been granted a residency permit — he will not consider returning to Gaza. “I will not go back to that prison, even if all countries refuse me,” he asserted.

“I left Gaza under Israeli shelling. I took the tunnels dug beneath the Gaza-Egypt border. I was chased by the Egyptian army, and I spent a terrifying night in Sinai’s Rafah until we arrived in Alexandria. Then we went by sea to Italy and finally arrived in the Netherlands in September 2014,” Youssef recounted.

Youssef was not the only Gazan who left during the July 2014 war, which lasted more than 50 days, as hundreds of others opted to head across the sea for Europe. The most famous tragedy befell a boat that embarked on Sept. 6, 2014, from Alexandria with about 450 refugees aboard. Half of them were Palestinians, mostly from Gaza, and all drowned except for eight Palestinians, a Syrian baby, a Syrian girl and an Egyptian man.

The Israeli war is over, but its repercussions and the ongoing siege have further deteriorated the situation in the Gaza Strip and increased the number of emigrants. Most European countries consider Palestinians “stateless” people, and statistics on them can be hard to interpret.

Ashraf al-Mjaideh, the owner of the Al-Quds Office for Travel and Tourism in Istanbul, confirmed increasing numbers of arrivals from Gaza.

“Hundreds of people in Turkey are trying to get to Europe, most of whom come from Syria and Gaza. I have seen entire families sell their houses in Gaza and leave for Europe,” Mjaideh told Al-Monitor.

In April 2016, 23-year-old Dana Nashwan, accompanied by her brother and mother, arrived in Belgium after having spent two months in Turkey following a difficult trip from Gaza. “We were looking for a better life and a chance to achieve our ambitions away from the problems and disappointments we face in Gaza.”

Though the three were fortunate to have been granted residence permits in Belgium, the rest of the family — her father, sister and younger brother — remained in Gaza awaiting permits until August 2017.

“It was a long year, but we are better now,” Nashwan said. She said that she saw an increase in the number of Gazan refugee families coming to Belgium over the rest of the year.

According to the Palestinian Central Bureau of Statistics, in 2016, unemployment rates reached 41.7% in Gaza compared to 18.3% in the West Bank. An August 2017 report found that 37% of the youth in Gaza had a desire to emigrate.

Yara Shaheen, 26, arrived in Belgium in July 2016 with her 3-year-old son, Omar, and applied for political asylum. “I left Gaza because of the deteriorating political and social conditions following the division and the horrors of three wars,” she told Al-Monitor. “Gaza has become a great prison devoid of compassion and humanity, particularly when it comes to women, so I decided to choose a better future for my son and myself.”

A 37-year-old mother who emigrated with her family from Gaza to Canada told Al-Monitor on condition of anonymity via Facebook, “We were hoping against hope despite all the wars on the Gaza Strip, but people suddenly lost hope. They realized they were not going to be allowed to travel or build a future of their own, so they rushed to leave.”

She added, “It's not just about politics, it's about the humanitarian situation. Staying in Gaza means psychological pressure and a lack of safety, of clean water, of freedom of movement and of job opportunities.”

Khaled Ziad, 24, is waiting for his turn to travel through the Rafah crossing. He told Al-Monitor, “I have 30,000 passengers ahead of me according to the lists of the Ministry of the Interior, and as soon as it’s my turn, I will emigrate in search of a real life away from wars, repression and poverty.”

Human rights activist Salah Abdul Ati said that emigration from Gaza has become a quest of desperation. He told Al-Monitor that many migrants risk illegitimate methods because it is so difficult to obtain a Schengen visa with a Palestinian passport.

Youssef still does not know whether he will be given a residence permit. People are cautiously optimistic amid the uncertainty of a Hamas-Fatah reconciliation. If achieved, reconciliation would help the Palestinians revive their economic and political ambitions as well as ease Palestinian immigration to Europe and Canada. What is certain, however, is that reconstruction works and the gains they can bring cannot materialize overnight.