Palestinians are increasingly seeking to leave the Gaza Strip given the deteriorating living conditions, seeking refuge in Europe. 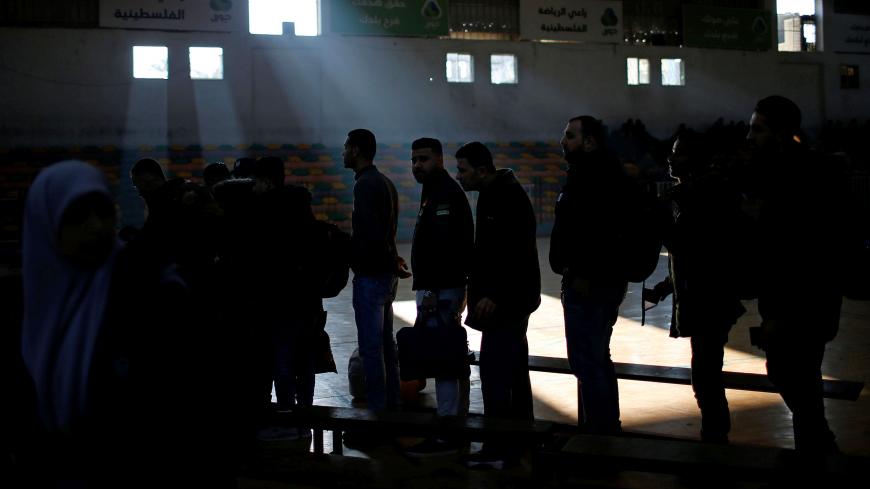 Palestinians wait for travel permits to cross into Egypt through the Rafah border crossing after it was opened by Egyptian authorities for humanitarian cases, in the southern Gaza Strip, Feb. 21, 2018. - REUTERS/Mohammed Salem

GAZA CITY, Gaza Strip — Along with 122 Palestinians from the Gaza Strip detained in a temporary refugee camp in Tamanrasset province in southern Algeria, Mahmoud awaits the decision of the Algerian government to release them so they can continue their journey to Europe. They had been arrested during the first half of October.

Mahmoud, 23, who did not want to reveal his full name, told Al-Monitor that he reached the border in the desert of southern Algeria with the assistance of smugglers who took him by land from Mauritania through the Malian desert to Algeria, where he arrived Oct. 9. He was planning to travel to the Spanish city of Melilla on Moroccan territories, then by sea to Spain before continuing by land to another European Union country.

He said, “Algerian security forces arrested me along with a group of 20 illegal Palestinians from Gaza, Syrians and Africans, after we reached the border between Mali and Algeria. They confiscated our belongings, including electronic equipment and phones, and they transferred us to a refugee camp in Tamanrasset sheltering more than 120 Palestinians from Gaza, alongside Africans and Syrians. Most of them in the camp were young — not older than 30. There were also families. I hid my phone to contact my family.”

Mahmoud left Gaza Sept. 16 after he had been detained at the headquarters of Hamas’ internal security services in Gaza City, on suspicion of collaborating with Israel and transferring money to bank accounts in Israel. He was released after three months following a confession that he had transferred money from international bank accounts to accounts outside Palestine, where some of his friends later wired him the money to Gaza.

“Although I was cleared of the treason accusation, the internal security services in Gaza did not leave me alone. They kept summoning me every 40 days to make sure that I was not colluding with Israel. Rumours spread in al-Zaytoun neighborhood that I was a spy for Israel. It became impossible for me to stay in Gaza, so I decided to leave,” Mahmoud said.

He added, “I left Gaza for Egypt in September through security coordination that cost me $1,500.”

Security coordination consists of an agreement between a travel office in Gaza and an Egyptian officer at the Rafah border crossing to register the names of travelers on lists after they pay a fee, without referring to the Ministry of Interior in the Gaza Strip for official registration.

Registering with the Ministry of Interior in Gaza is required for those wishing to travel, but students and sick people take priority over tourists and migrants. It might take years before the ministry allows those applying as a tourist or those wanting to attend a conference or immigrate to obtain a travel permit. So they pay between $1,300 and $1,500 to a travel office to be added to the security coordination list. Each time the crossing is opened, those on the list are allowed to leave, at an average of two buses per day at least.

Mahmoud said, “From there [Egypt] I flew to Mauritania, where I met a local smuggler who called himself ‘Sheikh.’ He took me along with 20 illegal migrants by land to a border city between Mauritania and Mali. We set out at sunset and it took us 30 hours to reach our destination [on the Algerian border]. An armed group that Sheikh said belonged to the Malian Azawads blocked our path, and we had to give them money to continue our journey. Most of us paid $500, but some could not pay and had to hand over their phones and computers.”

The journey from Gaza to the Algerian camp cost Mahmoud $5,000. He expects to pay another $5,000 to smugglers who would help him reach Europe, if Algerian security forces release him.

A survey conducted in July by Al-Aqsa University in Gaza indicates that 92% of the 1,280 people polled in the study believe youth migration has become a phenomenon. They blame the ongoing rift between Hamas and Fatah and high unemployment rates as well as a lack of basic services.

Karim Hussein, who works at an office for touristic and educational residencies in Turkey, told Al-Monitor that around 500 Palestinians from Gaza traveled via Turkey to Greece in August and September, for whom he had prepared the paperwork.

Ibrahim Hikmat, a friend of Mazen Hamayde who was found dead in the Algerian desert before reaching the Moroccan border Oct. 10, said that dozens of Gazans travel illegally on a daily basis to Morocco to seek asylum in the city of Melilla. Hamayde was one of them, but Moroccan smugglers stole his money and left him to die in the desert.

Hikmat told Al-Monitor, “Mazen and I split in the Algerian desert as he followed the Moroccan smuggler who promised him he would lead him to Melilla in 24 hours. I chose to go with another smuggler for a lower price. After I reached Melilla, I heard that the smuggler stole Mazen's money and left him to die in the desert. Residents found his body and took him to a hospital in Algeria.”

Hikmat said, “Mazen came to Egypt from the United Arab Emirates and wanted to migrate to Europe. I left Gaza for Egypt in search of a better future. We met while being smuggled in the desert. He didn’t speak much and was in a rush to reach Europe. He got frustrated with the long route. He did not verify the smuggler’s identity and unfortunately the smuggler who took me to Melilla filled me in on the details of what had happened to Mazen.”

Migration by land through Morocco, passing through Algeria, is not the only route Gazans set out on. Recently, a mother from the Shajaiya neighborhood in Gaza City traveled illegally to Belgium with her 10-year-old daughter who has autism. The journey cost her $11,000. She flew to South America, then to Europe.

She told Al-Monitor over the phone, on condition of anonymity, “I am seeking medical treatment and educational care for my daughter. I searched for it in Europe after not finding it in the Gaza Strip. I traveled to Egypt through security coordination, then to South America and then to Spain. From Spain, I traveled illegally by land to Belgium, with the financial help of my brother who lives there. I am now waiting to obtain Belgian residency.”

The journey from Spain to Belgium was difficult, as she does not speak any of the languages of the countries she traveled through. She said, “Air travel was the safer option for us since I did not want to put my daughter in any danger. I escaped with her seeking [a better] life, because Gaza has become a prison.”