The disappearance of Mahmoud Salfiti, a Salafist prisoner who had been granted a 24-hour leave to visit his family, raises questions about Hamas’ ability to control and secure the Gaza Strip. 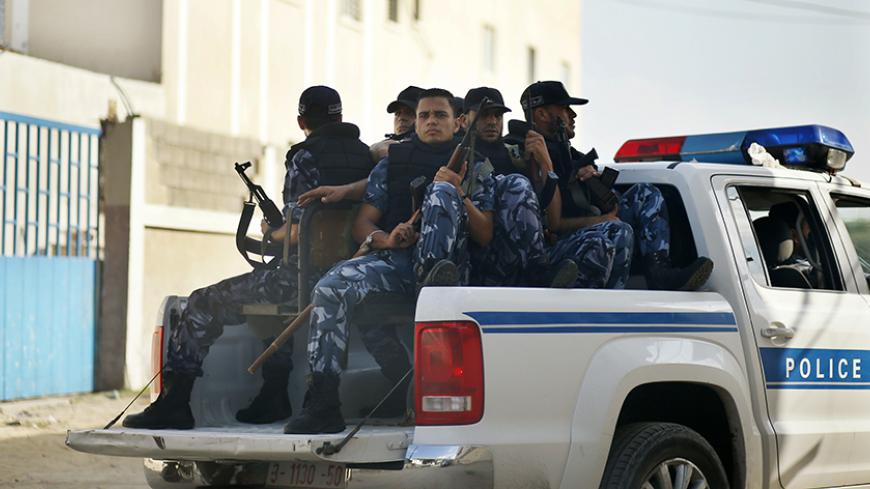 Hamas policemen guard outside a Gaza military court, Sept. 17, 2012. The court handed out sentences against four Palestinians involved in the kidnapping and killing of an Italian pro-Palestinian activist, Vittorio Arrigoni, in 2011. - REUTERS/Mohammed Salem

GAZA CITY, Gaza Strip — The disappearance of prisoner Mahmoud Salfiti, who belongs to a Salafist group in the Gaza Strip and is convicted of killing an Italian man in 2011, has raised serious questions in Palestinian society on how he managed to escape and the role of the Hamas security forces. Salfiti's escape has also revived the debate on the expansion of Salafist influence and its ability to affect change in Gaza.

Salfiti, 27, and two others — Mohammed Albraizat, 24, and Talal Omari, 21 — had threatened in a video on April 15, 2011, to kill Italian volunteer Vittorio Arrigoni, who was on an assignment in Gaza with the International Solidarity Movement, in the event Hamas did not release Salafist detainees within 30 hours. Arrigoni was found hanged and handcuffed in an apartment before the deadline expired.

Four days later, Hamas security forces entered a house in the Nuseirat refugee camp in central Gaza; Salfiti sustained minor injuries and Albraizat and Omari were killed in the operation. Salfiti was sentenced to 15 years in prison in February 2013.

After spending less than four years in Ansar prison in Gaza City, Salfiti was granted a 24-hour home leave by the prison administration on June 18 to visit his family in Gaza on the occasion of the holy month of Ramadan. Iyad al-Bezem, spokesman for the Ministry of Interior in Gaza, confirmed Salfiti's escape to Al-Monitor and said that his ministry is investigating.

“By law, prison administrations can grant detainees a home leave for good conduct when they have completed a quarter of their prison term; this was the case with Salfiti, but he never returned,” Bezem said.

However, several well-informed sources told Al-Monitor on condition of anonymity that Salfiti took advantage of the home leave that he was granted for Ramadan, and that he had made his way to Syria to join the Islamic State (IS).

The same sources said that senior leaders in the Izz ad-Din al-Qassam Brigades, Hamas' military wing, were involved in mediation efforts with the security services in Gaza in mid-June. They said that the security services agreed to grant Salfiti a home leave when his relatives promised to bring him back after 24 hours. But six hours after he left Ansar prison, he had disappeared. The sources stressed that they did not know how Salfiti had managed to escape from Gaza and whether he used the Rafah crossing on a fake passport or one of the few remaining tunnels to Egypt.

Salfiti’s escape from Gaza went viral on social media and Twitter as people speculated about which route he used. Some denounced the authorities for enabling the escape of a dangerous Salafist and failing to put in place surveillance measures during Salfiti's visit to his family.

“We sent a request to the security services to brief us on the circumstances of the [escape]. This is a very important issue for us and the relevant parties must be held accountable,” Moussa said. “Salfiti may have been able to escape through the Rafah crossing by using a fake passport,” and noted that this also happens in other parts of the world and not just in the Gaza Strip.

Kayed al-Ghoul, member of the political bureau of the left-wing Popular Front for the Liberation of Palestine, which denounced Salfiti’s disappearance, told Al-Monitor that there may have been “prior arrangements” that allowed Salfiti’s escape from Gaza. He ruled out the possibility that a solely personal effort on his part could have led to this, due to the tight security measures in Gaza.

“This incident needs to be seriously examined for its circumstances to be revealed, especially since there are indications of prior arrangements that allowed his escape. In light of the complex issues plaguing Gaza and the closing of official crossings and tunnels, it is difficult for anyone to escape illegally,” Ghoul said.

IS members in Aleppo had threatened Hamas in a video published on social networking sites June 30. The speaker in the video introduced himself as "Abu Qoutada al-Felastini.”

Felastini, a Gaza resident who recently joined IS in Syria, addressed Hamas in his speech and said, “We swear by God that we will take our revenge on you and make all of you cry. We swear that Gaza will be filled with blood and body parts.” He accused Hamas of “heading toward unbelief given the demolition of the Ibn Taymiyyah Mosque [in August 2009]” and promised Hamas to avenge the killing of Younis al-Hanr, a Salafist, on June 2 in the Sheikh Radwan neighborhood in northern Gaza City.

Moussa questioned the widening influence of Salafist groups in Gaza and downplayed their ability to bring about change amid the current circumstances in Palestinian society. “It is not true that IS or Salafist groups have influence in Gaza, or that they are expanding,” he said.

He explained that the presence of IS elements and Salafist groups in the Gaza Strip “is very limited," and that "there are several national and Islamic resistance movements in Gaza that use weapons for the sole purpose of ending the Israeli occupation. The ideas of these movements are spread across the Palestinian arena, so there is no suitable environment for IS’ expansion in Gaza.”