Can international force save Gaza?

With the deterioration of living conditions in the Gaza Strip, Israeli Prime Minister Benjamin Netanyahu must seriously consider the idea of having an international force control Gaza’s land and sea borders. 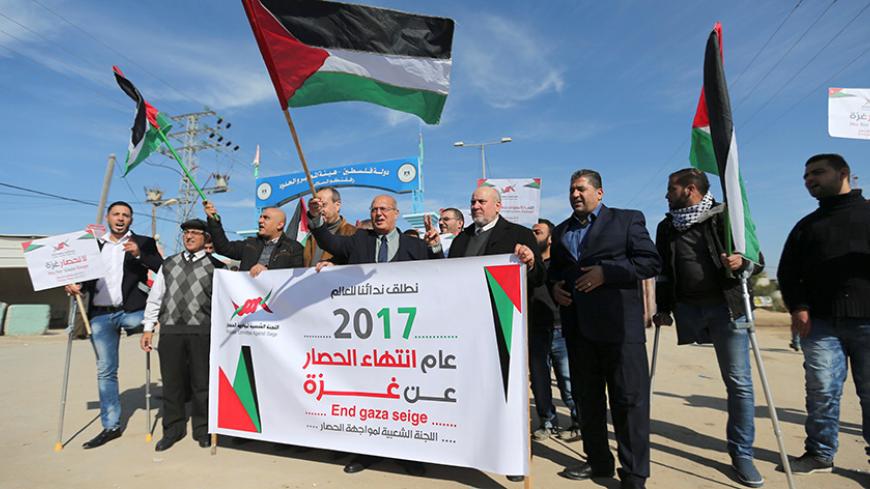 Palestinians take part in a protest against the Gaza blockade near the Israeli Erez crossing in the northern Gaza Strip, Jan. 5, 2017. - REUTERS/Ibraheem Abu Mustafa

Anyone following media reports about the humanitarian crisis in the Gaza Strip did not need the assessment offered by Military Intelligence chief Maj. Gen. Herzl Halevy that the powder keg that is Gaza will blow up in Israel’s face. A recent survey commissioned by the Israeli human rights organization Gisha shows that 67% of Israelis believe the nearly decadelong Israeli blockade of Gaza has undermined Israeli security, and 70% believe that an improvement in the living conditions of Gaza residents would reduce the level of anti-Israel hostility and violence.

Halevy based his March 1 closed-door briefing to members of the Knesset’s Foreign Affairs and Defense Committee, among other things, on a 2015 United Nations report warning that if current trends persist in the Gaza Strip, by 2020 Gaza will not be fit for human habitation. The UN Conference on Trade and Development that compiled the report noted the destructive effects on the enclave of its three wars with Israel since 2009. The last and longest, Israel’s Operation Protective Edge in summer 2014, led to the displacement of half a million Gaza Palestinians from their homes and pushed the majority deeper into poverty. With unemployment at 44%, 72% of Gaza’s households suffer from food insecurity.

The September 2015 report made headlines worldwide. But no seismic activity was recorded in the offices of Israel’s prime minister and his government ministers. So what if the children of Gaza are drinking filthy water? Why should we be bothered that unemployed university graduates lap up the anti-Israel incitement spewed out by preachers in the mosques? Hamas is unable to stop the rockets fired from Gaza into Israel by various factions? Never mind. On Jan. 24, Defense Minister Avigdor Liberman promised that in the next confrontation with Gaza, “We won’t stop until the other side screams 'gevalt' [Yiddish for 'good grief'] and raises a white flag.” As of now, no reports have emerged of Yiddish courses being offered by the education officers of Hamas and Palestinian Islamic Jihad. Nor do we know of any attempt by Israel to examine alternatives to its policy of blockading Gaza and bombing it from the air in retaliation for rocket firings.

A pale ray of sunlight was dispatched to Gaza residents and citizens of Israel from far-away Sydney. At a Feb. 26 meeting with Australian Foreign Minister Julie Bishop, Netanyahu said he would be willing to examine the deployment of foreign forces to control the Gaza Strip de facto and deal with terrorism issues. That would mean lifting the siege and opening the region to the entry and exit of people and goods, as well as accelerating the human and physical rehabilitation of Gaza. This is not the first time such an option has been raised. In June 2007, after Hamas took control of Gaza, then-Prime Minister Ehud Olmert said, "We must give serious consideration to introducing a multinational force, similar to the [United Nations Interim Force in Lebanon]” into the area along the border between Gaza, Israel and Egypt."

That year, former UN Secretary-General Ban Ki-moon discussed the issue with members of the UN Security Council, telling them that Palestinian President Mahmoud Abbas had asked him to consider the idea.

The idea of deploying a multinational force in Gaza and building a seaport on the Mediterranean coastal Gaza Strip is included in a comprehensive report compiled several months ago by Israeli defense experts of an organization calling itself Commanders for a Secure Israel. The group’s president, Maj. Gen. (Res.) Amnon Reshef, told Al-Monitor this week that such a force should consist of reliable soldiers from various nations who have experience in similar missions. He suggested that until a permanent agreement is reached with the Palestinians, and for a significant period after one is achieved, Israel would be responsible for security along Gaza’s outer perimeters. Reshef also proposed monitoring — and preventing — the transfer of weaponry to Palestinian terror groups by technological means, without an Israeli presence on the ground. Since any such arrangement would be perceived as an achievement for Hamas, Reshef advised that Israel take significant positive steps toward the Palestinian Authority (PA), a major Hamas rival, so as not to weaken Abbas’ status.

Even after the widely reported assessment by Halevy, no special movement was detected amid Israel’s political leadership. After all, why should they worry now about events forecast for 2020? So what if the cease-fire agreement reached with Hamas at the end of Operation Protective Edge included an understanding about indirect negotiations, mediated by the PA, on building a seaport for Gaza? By the way, contracts for construction of the port were signed back in 1994 between Israel and the PA. The plans were reaffirmed in the 1999 Sharm el-Sheikh memorandum, and construction began in the summer of 2000. But Israel bombed the site during the second intifada and it has since been abandoned.

At the start of the weekly Cabinet meeting March 5, Netanyahu said that on March 9, in his talks in Moscow with Russian President Vladimir Putin, he would demand that any agreement on ending the Syrian civil war take into account Israel’s defense needs on its northern border. Why not make use of Russia’s good ties with Hamas to promote Israel’s security interests on its southern border, too? Less than two weeks ago, the Putin administration hosted Hamas and Fatah movement representatives for reconciliation talks. Putin would probably be glad to cut the ribbon at the new Gaza port.

Since 2005 and until the Hamas takeover of the Gaza Strip, the European Union Border Assistance Mission supervised the Rafah crossing from Gaza to Egypt. The monitoring was conducted from a control room located several kilometers away, at the Israeli Kerem Shalom border crossing, near the meeting point of the Israel-Egypt-Gaza borders. Israeli security agents, the European supervisors and PA representatives watched the goings on at the Rafah crossing on a series of 30 closed-circuit video monitors. Israeli representatives collected information about those entering Gaza through the computerized databases at their disposal. In 19 months of operation, some 440,000 people passed through the Rafah crossing. It is safe to assume that if the sides were to ask, the EU would not refuse to send a monitoring force to a port in Gaza, which would allow 1.8 million residents access to the world and defuse the explosive tensions threatening Israel.