How both Israel and Turkey exploit Gaza's suffering

With the reconciliation agreement now signed between Israel and Turkey, Turkish President Recep Tayyip Erdogan has practically forgotten his demands to lift the Israeli blockade on the Gaza Strip. 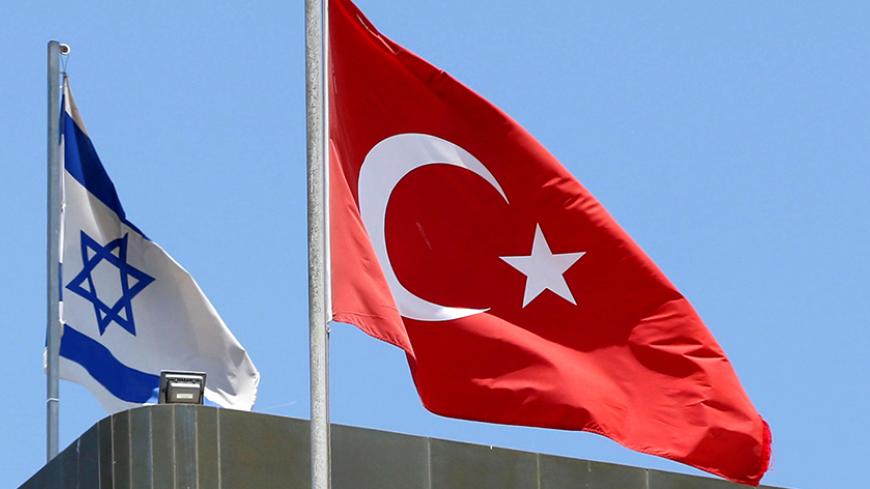 A Turkish flag flutters atop the Turkish Embassy as an Israeli flag is seen nearby, Tel Aviv, Israel, June 26, 2016. - REUTERS/Baz Ratner/File Photo

For the first time since the signing of the reconciliation agreement between Israel and Turkey June 27, and a day after its ratification by the parliament in Ankara Aug. 20, Israel once again struck in the Gaza Strip. In response to a rocket fired Aug. 21 from Gaza into the Israeli southern town of Sderot, the Israeli air force hit some 50 targets in the Palestinian territory over a two-hour period. Ankara announced that the Israeli attack was “not acceptable,” constitutes a breach of international law, disrupts the peace process with the Palestinians (it’s not clear to what process it was referring) and violates the relative calm in the region.

In response, Israel’s Foreign Ministry spokesman suggested that Ankara “think twice before it criticizes the military actions of others,'' promising that ''Israel will continue to defend its innocent civilians from all rocket fire on our territory.”

Turkey’s Foreign Ministry spokesman thought it apt to stress that “normalizing ties with Israel does not mean that we will keep silent in the face of attacks against the Palestinian people.” The Israeli Foreign Ministry, for its part, also referred to the reconciliation deal, noting that “the normalization of our relations with Turkey does not mean that we will remain silent in the face of its baseless condemnations.”

Thus, in August, a magic formula was found that enables Israel to continue eating the occupation cake and maintain intact its relations with an important Muslim state: The Palestinians will attack Sderot, the Israeli air force will attack Gaza, Turkey will condemn Israel and Israel will condemn Turkey. And what will become of Gaza’s besieged children? Who really cares?

Does anyone even remember that the crisis in the relationship was brought about by the blockade? Nine Turkish citizens were killed in an Israeli navy raid on one of six boats — the Mavi Marmara — that left Turkey in May 2010 heading for Gaza. They sought to bring Gaza’s residents food and medicine and pick up a few anti-Israel headlines. The reconciliation agreement reached at the end of June easily skipped over the walls of Gaza. Turkish President Recep Tayyip Erdogan made do with a declaration that Turkey would “take all necessary steps to address the grievances of the Palestinian people.” He was, obviously, addressing the Turkish people. The residents of Gaza do not really interest him.

This reminded me that some 20 years ago, I heard then-Foreign Minister David Levy responding to a rebuke by former Turkish Prime Minister Necmettin Erbakan, saying, “Turkey is the last country that can preach to us.” Levy was referring to the Armenian genocide 100 years ago, which Israel refuses to officially recognize. Prime Minister Benjamin Netanyahu ignored Erdogan’s rebuke. Instead, he opted to talk to the Israeli public about the importance of the strategic relationship with Turkey in order to justify Israel’s apology over the Mavi Marmara incident and his agreement to compensate the victims’ families to the tune of $20 million.

A special report issued Aug. 26 by no fewer than 16 United Nations aid agencies operating in the Palestinian territories illustrates Turkey’s hypocrisy. Not only does the reconciliation agreement not do anything for the Gaza Strip’s 1.9 million besieged residents, but their condition continues to deteriorate. The special report — based in part on World Bank data — paints a grim picture of the humanitarian crisis in the blockaded region. The per capita gross national product (GNP) has grown no more than 2% over the past 20 years — less than the annual population growth in Gaza. The per capita GNP barely reaches $463 annually — about half the per capita production in the West Bank. This economic plight is mainly the result of restrictions on the export of finished products from Gaza and on the import of raw material. Due to the limitations imposed on building material entering Gaza, about half of the 11,000 residential buildings that were destroyed completely during Operation Protective Edge in 2014, and about one-third of those partly destroyed are still uninhabited, leaving 75,000 people homeless.

In December 2015, Israel imposed further restrictions on the departure of Gaza residents to Israel and the West Bank for medical treatment. Israel also reportedly announced recently that it would allow Gaza residents to go abroad through the Allenby Bridge (to Jordan) only on condition that they do not return for at least one year. In recent months, since the signing of the reconciliation agreement, Israel has revoked or failed to renew the permanent long-term exit permits it issued to about one-third of some 5,000 registered Gaza traders and businesspeople. After allowing Gaza fishermen to troll in waters 9 nautical miles off the Gaza coast for over two months, Israel announced it was once again imposing a 6-mile limit. Human rights organization Gisha notes that absent a security-related explanation, there is no reason to limit the fishing activity that provides a living for some 4,000 workers. This, along with the almost hermetic closure imposed by Egypt on the crossing of Gaza residents into its territory through the Rafah crossing, has pushed general unemployment levels to more than 40% — and to 60% among Gaza’s young people.

Indeed, as Israel’s Foreign Ministry spokesman suggested, Turkey should “think twice” before criticizing the injustice caused by Israel to Gaza’s civilian population. Even as Ankara was complaining about the Israeli air raid on Gaza in retaliation for a rocket fired into Israel, Turkish planes were killing dozens of Kurdish civilians on its border with Syria.

Yet, Turkey is not alone in reaping public relations benefits on the backs of Gaza’s besieged residents. According to World Bank data in the UN report, only $475 million of the $3.5 billion pledged at the October 2014 Cairo Conference by donor states — chief among them the wealthy Gulf countries — have reached Gaza. At the same time, the suffering of Gaza’s children serves the wheeler-dealers of the Palestinian Authority who spend their time waxing poetic about it at international conferences, and is also used by Hamas for its propaganda against Israel and the PA.

But most importantly, everyone in the prime minister’s office in Jerusalem and at the presidential palace in Ankara is happy; neither side sustained casualties in the air raid on the Gaza Strip. The reconciliation agreement has successfully weathered its first test. As they start school, let's hope Gaza’s children and the Israeli children in neighboring Sderot — the victims of two-faced diplomacy — have a quiet year.